Consider Aircraft A cruising at FL400 and Aircraft B cruising at FL410. Both in close proximity, heading in the same direction. Ignore altitude for direction of flight issue. When aircraft B requests to climb to FL430, would allowing him to do that cause a loss of separation?

It seems really counterintuitive that increasing vertical separation between two aircraft can cause a loss of separation.

I'd love to know the answer to this question for both ICAO and FAA land with 4444 and 7110.65 citations if anyone knows them.

I think the way rules regarding RVSM are worded in ICAO documents leaves some room for interpretation. When RVSM was implemented, it was probably not very common for aircraft to be able to climb above FL400, so this specific problem was probably not considered when writing the rules. But I would say, when in doubt, use the more conservative interpretaion, which would be that: Yes, this would be a loss of separation.

It sounds weird that increasing the distance between two aircraft can cause a loss of separation, but RVSM airspace is not actually the only place where this can happen. I can think of a few other examples:

These are all real examples that, although they shouldn't happen, could result in a loss of separation between two aircraft that were initially separated, while distance between them actually increases. I think the key point here is the fact that in each example, the rules regarding separation minima change, which is what causes the loss. A rule that allowed the aircraft to be relatively close together, for one reason or another, no longer applies, and so we have to fall back to another rule, which may require larger minima.

While this may not specifically answer your question regarding RVSM, I think the exact same logic can be applied. In your example, initially, one rule applies: RVSM, which allows 1000 ft vertical separation. As aircraft B leaves RVSM airspace, the RVSM rule no longer applies, so we have to fall back to the general rules for vertical separation, which says we need 2000 ft. Thus, your example would indeed be a loss of separation.

If the controller is following FLAS - Flight Level Allocation Scheme, which permits the level, then there's no "loss of separation". FLAS typically takes the form of a diagram or table of the FL's that are allowed in a certain FIR or airspace and also the restrictions on direction, and sometimes further restrictions such as timings or Metric level values etc. It lays down exactly which levels are allowed, in which direction etc. rather than using only a description or formula such as "2000 ft separation". You can check your FL in the table, see what it says, and plan or base your tactical request accordingly.

Here's an example from the UK Flight Planning Guide, CAP 694. 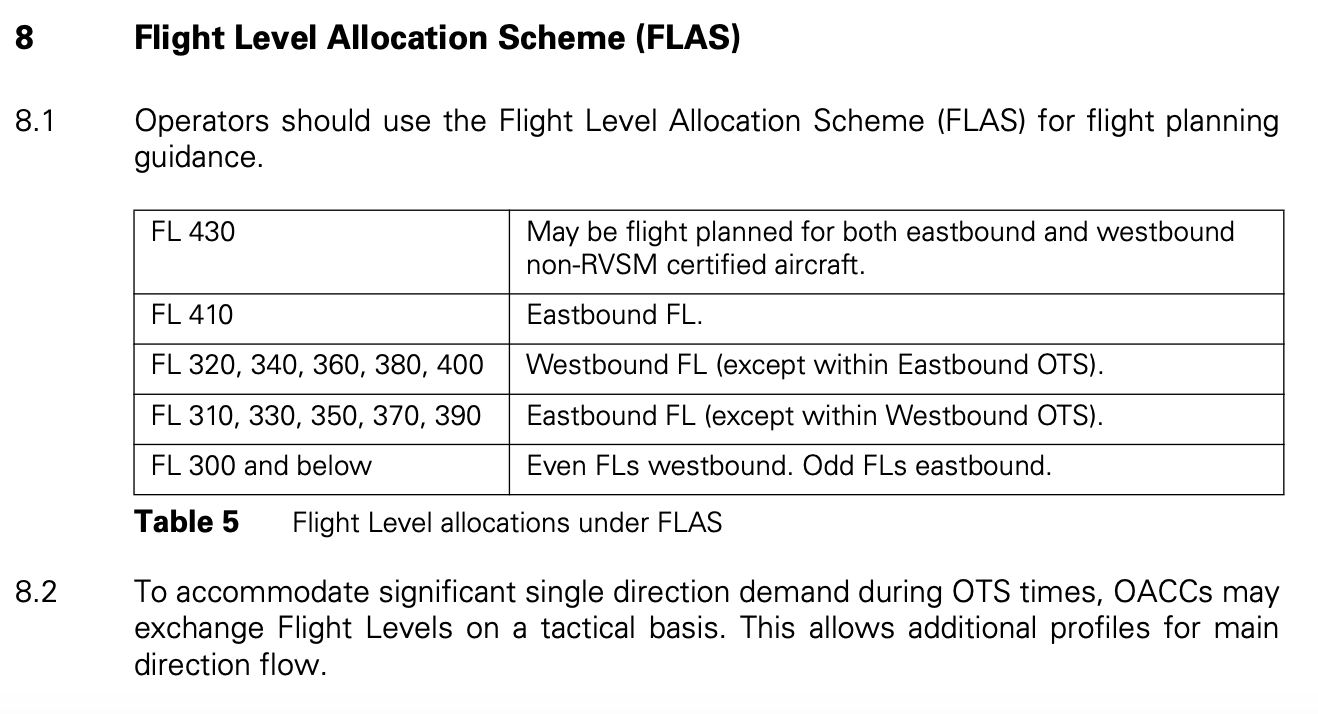 Note also that FL430 is 'traditionally' an eastbound level, but as you can see, this has been modified under FLAS

Here's another 'circular' from the AFI (Africa/ Indian Ocean) area that is quite well aligned with the question we're trying to answer.

The application of the RVSM FLAS in AFI is restricted to FL290 – FL410 inclusive for all eligible aircraft.

The application of RVSM is adequately documented in ICAO Document 9574, Manual on Vertical Separation Minimum between FL 290 and FL 410 Inclusive.

It has been observed, during the scrutiny of Air Traffic Flow Data, that FL420 is being allocated.

In the event that two aircraft cross each other, one at FL410 and the other at FL420, a reduction in vertical separation is deemed to have occurred. This event will thus pose a risk to RVSM and en- route safety.

Air Navigation Service Providers and Aircraft Operators must ensure that FL420 is not allocated or utilised.

Further to this the allocation and use of FL420 should be immediately brought to the attention of ARMA for discussion with the relevant parties.

RVSM and en-route safety is of paramount importance.

This is also the end of my answer, but I'm leaving in place the previous write up which is quite accurate except that it did not answer the question asked as I misunderstood the question. I regret the error. (The moderator may feel quite free to remove the portion below the dashed line.)

Apart from the vertical (flight-level), the required separation can also be taken care of in the lateral (cross-track to the left or right), and longitudinal (along-track, going relatively faster or slower, to achieve the needful) and ATC uses these to ensure separation before clearing the climb within, or through RSVM airspace. Depending on the type of facilities/airspace, ATC may use Radar Control or Procedural Control (position reports) to achieve this.

At no time would ATC compromise separation or have 'doubtful' separation. RVSM based separation would be applied to RVSM capable aircraft, and non-RVSM separation between any non-RVSM aircraft (or one that has become incapable of meeting RVSM requirements)

If, as in the example the two are close proximity same direction traffic such clearance will not be given except as described above.

If the request is made in good time, or planned ahead (even in the filed plan), it is more likely that you will get the level without undue delay. Though RVSM was introduced to accommodate more traffic, nevertheless, every possible airway/airspace slot is not necessarily occupied and ATC generally try and make the most efficient use of the airspace so as to accommodate flights as planned, as well as accommodate tactical real time requests. Fuel saving is the usual benefit and reducing the aviation's carbon footprint is in everyones interest so there is no prohibition on requesting climbs.

Such clearances to climb or descend may typically have a restriction reach the cleared level "by time HHmm", or "best ROC/minimum Vertical Spd XXXXfpm" or AT a WPT or crossing a Longitude or at a distance X nm from some reference point and once accepted it is the crew's responsibility to ensure compliance of the instructions. (will try and include suitable references soon, meanwhile @dawg has given a link above)

Not the answer you're looking for? Browse other questions tagged air-traffic-control altitude rvsm or ask your own question.

18
Is it legal to fly in RVSM airspace with an inoperative autopilot?
5
Under what conditions can a non-RVSM aircraft or pilot fly in RVSM airspace?
11
How would ATC try to establish contact with a VFR craft?
8
What is minimal altitude that aircraft (rocket?) can fly above any country without any permission?
1
Reduction in Service Ceiling / Change in RVSM
1
Can ATC provide VFR flight following to a VFR aircraft in class E airspace?
11
How is radar separation assured between primary and secondary targets?
3
Is there any current and/or upcoming technology that alerts Air Traffic Controllers in case of loss of aircraft separation?
0
Why can’t a single-fan-beam radar determine the elevation angles of its primary targets?
0
What is the vertical separation minima between IFR and VFR?