Are there any remaining flying boat or seaplane airliners in operation?

Is there anywhere in the world that still offers scheduled air carrier service using flying boat / seaplane types of aircraft - something akin to a proper airliner? Or are they all limited to charters and shuttle-type flights on de Havilland Otters and the like?

As far as I know, there is no actual flying boat in use at an airline. The flying boats that are still in commercial operation are typically used for fighting forest fires or maritime patrol. This may change in the near future since there are currently at least two flying boats in development that might be used by airlines:

If you are not just interested in pure flying boats, but also floatplanes, then there are many airlines world wide that operate these on regularly scheduled flights. One of the biggest is Trans Maldivian Airways operating various variants of the DHC-6 Twin Otter. They operate 55 seaplanes, which according to Wikipedia makes them the biggest seaplane airline:

They offer flights to over 80 destinations:

This is their main terminal at Velena International Airport: 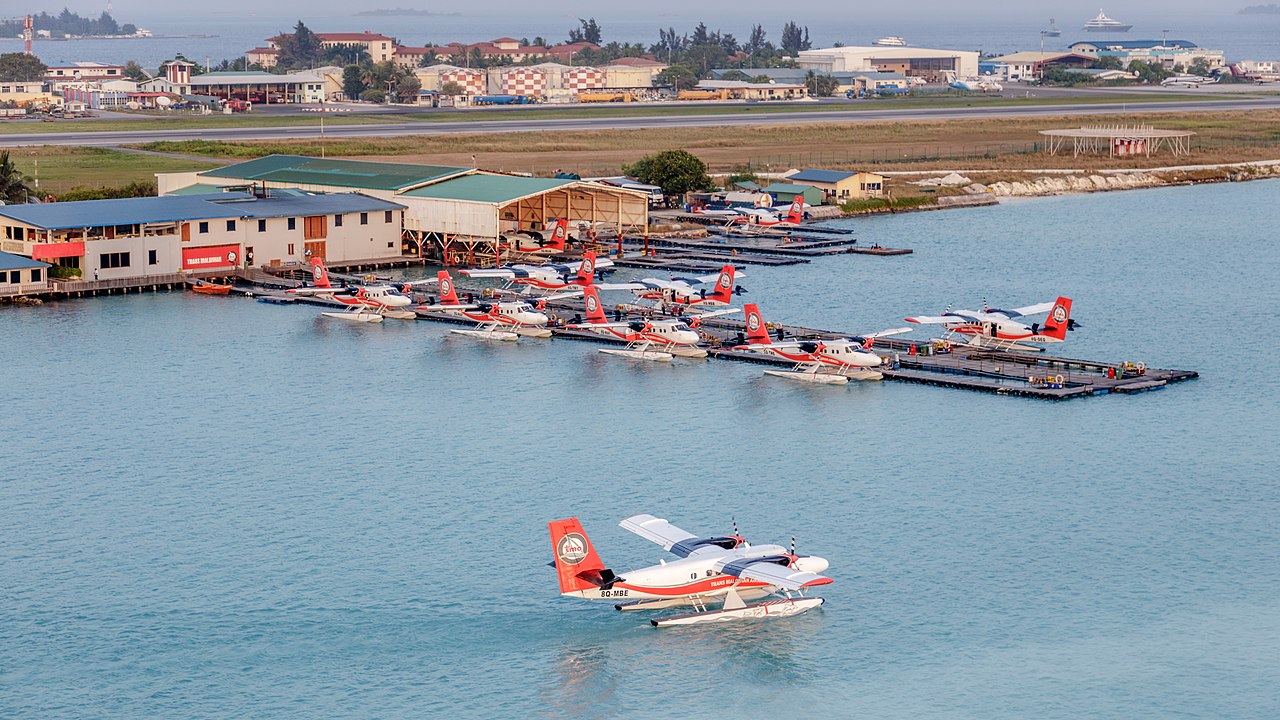 Last time I was there (fifteen or so years ago) there was a thriving commercial air passenger operation, including at least a couple scheduled flights (weekly, I believe, not daily), at the north end of Lake Washington (near Seattle), officially in either Bothell or Woodinville, Washington state (comments reminded me it's Kenmore Air, in Kenmore, WA). There were no flying boats in service there, but there were Beavers and Otters on floats.

Beyond that, there are a number of tiny (one or two aircraft) airlines operating scheduled feeder service in Alaska and northern Canada that operate on floats, because lakes and rivers are much more common in the wilder parts of the sub-Arctic and Arctic than even grass or gravel airstrips. As long as there's water to land on at both ends, such aircraft are good to go (and some have retractable gear, so they can land on concrete if necessary) -- and if you're starting from a village equidistant from Fairbanks and Nome, these are likely to be your only choices for local service. The bulk of their revenue is likely from hunting and fishing charters, like any bush operation -- but many of them operate weekly or twice-weekly scheduled flights to a hub terminal.

There is at least one jet flying boat, the Beriev B-200, in production.

The Wikipedia article gives it a capacity of 72 passengers. I don't know how many (if any) are employed in an airliner role, though this variant has a "pressurised and air conditioned cabin allowing transportation of up to 72 passengers.

The passenger variant is the BE-210 shown here at beriev.com

Most seem to be employed as water carriers in a firefighting role; it was designed to skim the surface and scoop up water at close to takeoff speed.

Four or five years ago or so, Pacific Coastal Airlines spun off its seaplane division as Wilderness Seaplanes, which flies scheduled service in a fleet of four Grumman Gooses in British Columbia.

Not "air carrier service", but Viking Air acquired from Bombardier the type certificates and continues to produce the CL-215, CL-215T, CL-415 and CL-415EAF as an aerial firefighter, an amphibious aircraft.

The following relates to "Float planes", rather than "flying boats or seaplanes" ...

With a fleet of 57 de Havilland Twin Otters, Trans Maldivian Airways operates the largest seaplane operation in the world.

TMA is the airline referenced in @Bianfable 's answer.

Not the answer you're looking for? Browse other questions tagged airliner seaplane or ask your own question.

20
Are there any airliners not made by Airbus or Boeing?
21
Have there been any solo flights on airliners?
7
Has there ever been a seaplane with retractable pontoons?
20
What is this flying boat being restored at the Udvar Hazy Center?
9
Has there ever been a seaplane with inflatable airbags rather than traditional pontoons?
41
Why was the boat mounted this way on the underside of the wing on the "Landseaire" flying yacht?
9
Are there any fly-by-wire airliners with negative or near-neutral pitch stability?
5
Are any airlines actually flying the Comac ARJ21?
0
What flying boat has the highest maximum takeoff/landing sea state?
5
Why aren’t there any lifting-canard airliners?