What could explain the fact that during 1976-80, I used to hear commercial jets make sonic booms while flying overhead?

I've read on this site & on Wikipedia that there have only been a couple of commercial jet planes in history that have broken the sound barrier--either in testing (without passengers) or during an unexpected descent. However, during the period of 1976-80/81, when I lived fairly close to an international airport, I used to regularly hear commercial jets (I assume 747's) create sonic booms as they passed fairly low overhead. I now live even closer to a much bigger international airport, & never hear this. That's why I started to wonder why. & now that I've read that on record, it's only happened a couple of times, I'm even more curious of what the explanation could be. (It was Bradley Airport in CT, if that matters).

Note that 747's and other jumbo jets operating out of Bradley could not have produced sonic booms because they do not fly above the speed of sound (they only do 500 to 550 MPH at high altitude cruise) and, in any case, far slower than that (~250 MPH) when near the ground as for landing and takeoff.

Therefore, whatever it was you heard, it was assuredly not a sonic boom from a passenger plane. The last time these commonly occurred was in the 1950's and '60s when the US Air Force flew mock bombing missions across the United States in supersonic bombers at low altitude, to train the pilots and crews for similar missions against targets in the USSR.

Although sonic booms were essentially outlawed over populated zones in the early 1960's, in your case they apparently did happen during flight tests of the F-22 Raptor in your location, which is very interesting! Thanks for @reirab's detective work which uncovered this.

It was either not a sonic boom, or it was not a commercial jet. As Niels has pointed out, civilian aircraft are prohibited from operating faster than 250 knots Indicated Airspeed below 10,000 feet MSL in most cases. You would have to get special permission from FAA leadership (not ATC controllers) to otherwise perform such a stunt.

At those speeds, you can hear the aircraft coming. But, the sound seems to be much more intense and at a lower (bass) frequency after it has passed rather than when it is approaching. Like hearing a race car at full-tilt passing you on the sidelines. Much more rumble-like after passing due in part to Doppler effect and the aircraft being closer to the ground when landing.

Speaking of closer to the ground, modern Noise Abatement Procedures have made it so large turbine powered aircraft avoid overflying populated areas at low altitudes. The aircraft will climb quicker to altitude, descend later from altitude, or turn away sooner, thereby reducing the effect of aircraft noise in neighboring communities.

The FAA and ICAO has taken further steps to reduce the actual noise produced by aircraft according to FAA.gov,

“In 1990, Congress passed the Aviation Noise and Capacity Act, which required that by the year 2000 all jet and large turboprop aircraft at civilian airports be Stage 3.”

Furthermore, FAA.gov goes on to say!

Small military jets (not transport or cargo) sometimes operate at higher speeds along specific routes or in specific areas. Though, even at subsonic speeds, the effect can be quite jarring. When close to the ground, it is almost like a fighter jet is sneaking up on you in silent mode until it passes you in a great and sudden cacophony of sound. You don’t hear it coming, then BOOM! Unfortunately, that is still not a sonic boom. Just aircraft noise with a perceived increase in intensity as it thunders past you.

In the case of engine noise, you will continue to hear the noise as the aircraft fades into the distance. Like rolling thunder instead of the bomb-like or cannon-like dull thud of an explosion that is a sonic boom.

If you lived near an international airport with commercial traffic, then it couldn't possibly have been sonic booms, as others have noted. What you likely have heard is jet noise.

Jet noise has been known to be notoriously bad. If you google sound scale, jet noise is pretty much always near the top. That's one of the primary reasons why city airports haven't flourished as well as people have thought back in the 70s. That being said, leaps and bounds have been made since the first commercial jet airplanes. 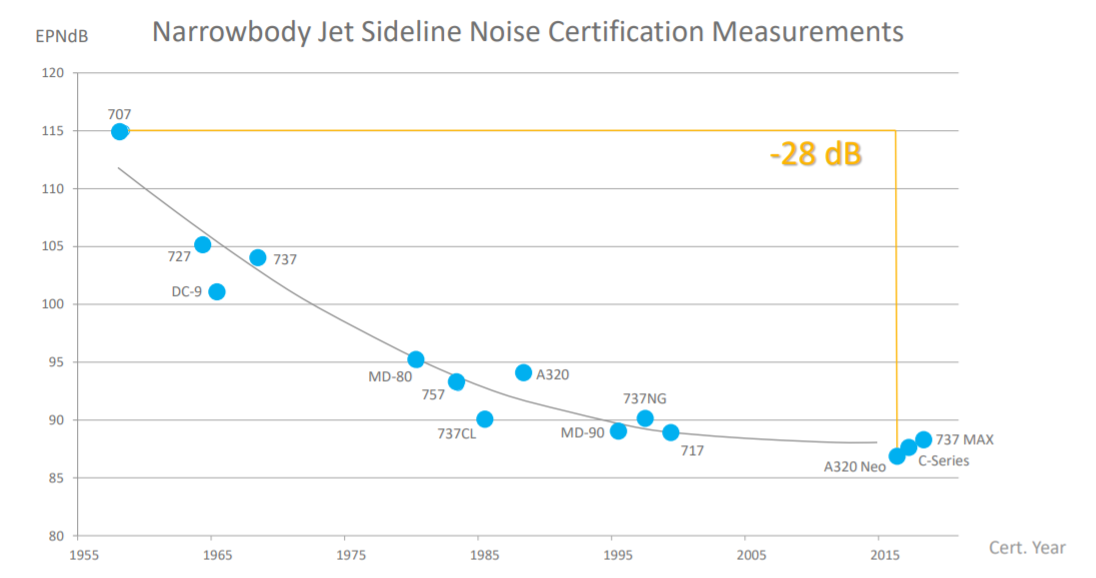 The above chart shows the sideline noise of narrow-body jet (including turbojet and turbofan) powered airplanes measured in EPNdB, which is a scale for Perceived Noisiness Level. As you can see, there has been 15-20dB reduction between what's certified in the mid-90s and 70s. A 20dB reduction corresponds to a whopping 99% reduction in sound energy, and a 75% reduction in terms of hearing perceptibility.

Much of the noise reduction has been through the engines themselves, as shown below. For new aircraft, we've reached a point where airframe noise is comparable or larger than engine noise for noise testing. 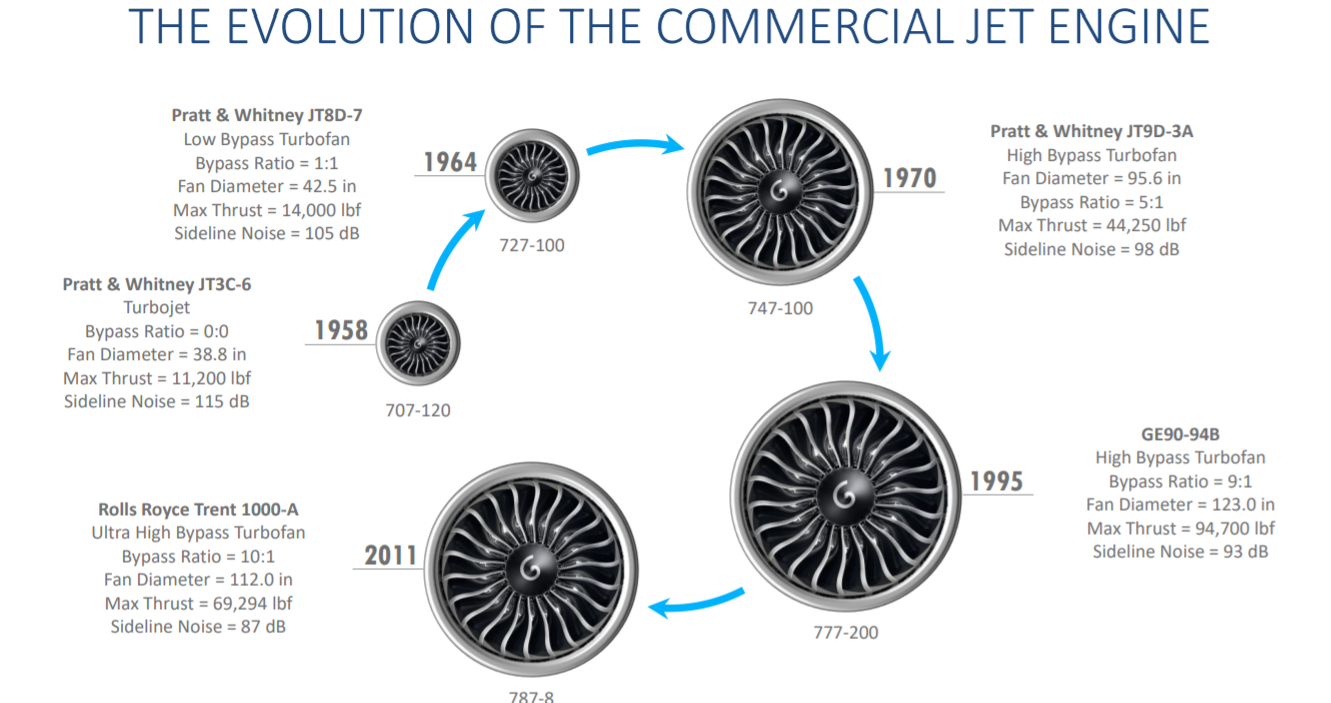 Note: Concorde SST is a definite abheration. It's certified in the late 80s and has a sideline noise of 112 EPNdB. That's when its speed is subsonic.

You may have been hearing the Concorde reaching supersonic speed after its takeoff from the JFK and Dulles airports.

I heard them frequently while on Cape Cod during the summer months. Interesting studies were done about this phenomenon and its effect on the population.

The other answers do a good job of explaining how commercial airliners have gotten quieter over the years and how you were probably hearing jet noise, not sonic booms. But how do you know it wasn't a sonic boom? What would it have been like to live under regular sonic booms? Well the only way to know that for sure would be to regularly fly supersonic flights over a heavily populated area and then study how people responded. Doing that would be a bad idea at best and madness at worst. So of course it was tried.

Oklahoma City volunteered to be the test city for a 1964 test. For six months, the Air Force flew supersonic flights over the city to see how much it annoyed residents. It wasn't subtle. The final report tried its best to put a positive spin on the results, but there was no hiding that there was a fundamental difference between jet noise and a sonic boom. While 70% of residents reported hearing airplane noise, 99% reported hearing sonic booms (Table 78 of the final report). And while 6% of residents reported being annoyed by airplane noise, 25% said they were bothered by the sonic booms (Table 79).

Over 80% of all respondents said they could always distinguish a sonic boom from other noises... Most of the people who can t always recognize a boom said they thought it was either an explosion or a thunder storm. It is interesting to note that the distant area residents most often failed to recognize the boom and wondered if it was a storm or explosion

So if the sound you heard sounded like an airplane, it probably wasn't a sonic boom. You'd expect to hear something more like thunder or an explosion.

A whopping 40% of area residents reported damage to their homes. In one of the report's most optimistic sections, it tries to put a positive spin on the damage claims:

Direct scientific evidence indicates that the Oklahoma City booms did not cause any significant damage to the local test houses, which were instrumented by the FAA to measure physical effects of booms. Large numbers of residents, however, felt their houses had been damaged. Over 40% overall felt this way; while 50% of the annoyed and 86% of the actual complainers also felt this way. This clearly suggests that belief in alleged damage increased annoyance and complaint activity.

So even through the positive spin of the report, you see a picture of people who endured sonic booms that they thought were explosions and that they said caused damage to their homes. It sounds like what you heard wasn't quite this intense and was more likely to be jet noise.

12
What causes the distinct sounds of a jet engine?