Can a plane bank without turning?

Can planes bank without turning, and if so, how is it possible?

A plane's wing is designed to naturally create lift; the explanation for that is that the greater speed of the air moving over the wing reduces the air pressure above the wing and air pressure from underneath pushes the wing up.

Yes it can. The steady-heading sideslip (SHSS) maneuver is used in flight testing to demonstrate static lateral/directional stability (similar maneuvers exist as sideslip approach in crosswind, or stabilized control with one-engine-inoperative at low speed). In this maneuver, rudder is applied to hold a sideslip, which generates an opposing side force and rolling moment. The rolling moment is neutralized via ailerons, and the side force is canceled out by banking to the opposite side. Once at steady-state, the aircraft is maintaining a rectilinear course, while banked. 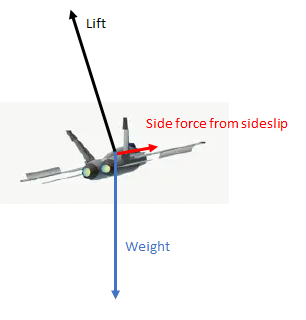 Yes, it's entirely possible. You can use the rudder to oppose the turn induced by the roll, and thus fly straight. However, doing so means that your nose is pointed off at an angle from your direction of flight, so this dramatically increases drag.

In fact, this is a common technique (at least among general aviation pilots) for losing altitude without increasing your airspeed during landing, if you're too high and fast to make it down to the runway otherwise. You're actually required to demonstrate this technique (called a forward slip) in order to get your pilot's license.

Here are two questions back at you.

Can a plane turn, with banking?

Yes, of course it can, the normal way using the ailerons to tilt the airplane and thus change the angle of lift. You already know all about that.

Can a plane turn, without banking?

Yes, it can; by using the rudder to do the turning it can pull off a “flat turn” as it were.

OK... are you getting any clever ideas? I bet you are.

Can it do both at once?

Can it do both at once, turning equal but opposite?

Yes. The pilot can make the two turns cancel each other out, so the plane goes in a straight line after all.

What is not canceled out? The aileron banking. That still happens. So there you are flying straight and tilted.

Of course this creates a lot of drag, and is a huge fuel waster... so I wouldn’t do it at cruise. But if you’re on approach and you have extra kinetic energy to dump, it can be a good plan.

Assuming you’re not flying an F-14 Tomcat. Kara Hultgreen tried that, and the Tomcat did not like it.

Can planes bank without turning

Yes, a plane may fly in a banked attitude without turning.

Yes, whenever a plane is banked and the wing is generating lift, the lift vector has a horizontal component that tends to "push" the plane to the side, i.e. tends to make the flight path curve1. If the plane is banked and still is travelling in a straight line, some other force must be opposing the horizontal component of the lift vector. That other force is typically the "sideways lift" force generated by making the fuselage fly sideways through the air, so that it acts like an airfoil-- like a "mini wing".

Here's how it works in actual practice-- use the ailerons to roll left. As the bank angle increases, the plane will tend to turn left, but you can prevent this by applying right rudder as needed to hold the heading constant. The wind (airflow) is now hitting the left side of the fuselage and creating a force toward the right that opposes the force from the banked wing. Once you reach your desired bank angle, you can relax some of your aileron input, but you'll typically2 need to maintain some amount of left aileron deflection, or else the bank angle will start to decrease, due to the aerodynamic effects of the sideways airflow created by the right rudder input. So you are holding left aileron and right rudder, and you are flying sideways through the air at a constant bank angle without actually turning. This is called a "cross-controlled sideslip".

1-- unless the wing is "unloaded" to the zero-lift angle-of-attack, as would be the case in a sustained 90-degree "knife-edge" maneuver.

2-- an exception would be an aircraft with no coupling between slip and roll, such as an aircraft optimized for aerobatics with a mid-mounted wing with zero sweep or dihedral. In such an aircraft, the aileron input could be relaxed all the way to zero once the desired bank angle is reached, and the aircraft would remain in a banked attitude. In such an aircraft, the sideslip could be maintained with rudder deflection alone. There are even some aircraft that actually require the ailerons to be deflected in the same direction as the rudder, rather than the opposite direction, to maintain a constant bank angle during a sideslip, but these are unusual cases. In most aircraft, the rudder and aileron inputs must be "crossed" to maintain a steady-state sideslip with constant heading and bank angle.

The short answer is yes. A coordinated turn has both bank and yaw induced simultaneously in the same direction. If you induce enough yaw in the opposite direction of the bank, the aircraft will fly in a straight line even though the wings are not level. You do this by cross controlling the aircraft. In laymen’s terms, that means you turn the yoke to the right while pressing the left rudder pedal, or turn the yoke to the left while pressing the right rudder pedal. This is called a slip.

Pilots utilize a slip for various purposes. Banking the aircraft will increase the horizontal (Left and right) component of lift, and reduce the vertical (up and down) component of lift. This is very useful in a number of circumstances.

Pilots adjust their roll and yaw inputs in order to let the horizontal component of lift counteract the force of a crosswind while keeping the ground track of the aircraft consistent with the runway direction and the nose (heading) aligned with the runway. In a strong crosswind, the plane will land on one (the upwind) main landing gear first while remaining in line with and traveling Down the runway. This is called a side slip.

Pilots will also adjust their roll inputs in order to drastically reduce the amount of vertical component of lift. The right amount of yaw will angle the nose of the aircraft out of its most efficient and streamlined position in the slipstream and/or relative wind. The combination of the two will keep the aircraft moving on a consistent ground track while increasing the aircraft’s descent rate. Normally, increasing the aircraft’s descent rate would create a corresponding increase in airspeed. But, since the aircraft is no longer moving in an efficient, streamlined manner, there is an increase in drag. Therefore, the pilot can have an increased descent rate without an increase in airspeed. Pilots will do this to lose altitude quickly, or to descend for landing without flaps to slow them down. This is called a forward slip.

Yes you can bank an aircraft without turning it, provided you do not load the wing ie maintain zero angle of attack, and therefore zero lift.

The downside to this is that, in doing so, you are now in free fall as there is no force to counteract gravity*. You will only be able to maintain such a condition for brief periods without reloading the wing to maintain altitude. If you do so while rolled into a bank, the aircraft will start to turn again. Aerobatic pilots do this on a regular basis in maneuvers like slow rolls, knife edge passes, etc.

*this does not take into account the force of thrust in high pitch maneuvers, lift from the fuselage and other airframe structures, etc.

Not the answer you're looking for? Browse other questions tagged flight-controls aircraft-physics flight-dynamics maneuver flight-mechanics or ask your own question.

31
Can you fly an airplane at a 90° roll angle without losing altitude?

21
As a plane gets slower, why does a certain bank angle make you turn faster?
10
How does turn radius change with velocity between Vm and Vs, as in a 180 degree turn in a canyon?
6
Why does the A320 use the rudder for lateral control in mechanical law?
3
What is the term for an aileron that’s also used as a ground spoiler?
1
Why did the Wright brothers take steps to increase the amount of vertical surface area forward of the CG on some of their aircraft?
16
Can gliding your plane save fuel?
2
Is the turning motion of a banked airplane caused by true centripetal force?
1
Can plane climb without increase pitch angle?