Is the Batjet Design Physically Feasible?

I realize the plane is fictional. However, in the Batman Animated Series by Warner Bros, we see this Batjet. 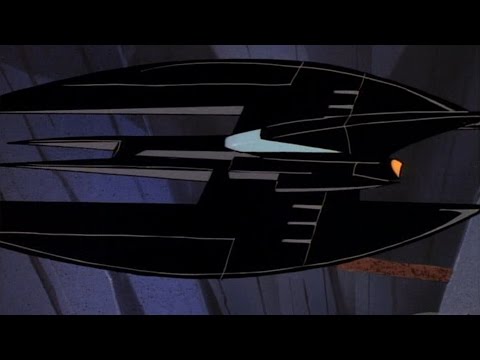 So this got me thinking (and I'm not a physicist): is this air frame configuration even possible? Has a "rounded", forward-swept wing design like this been attempted before? Or would a design like this never actually fly?

Any real-world examples that are similar in nature?

Yes, rounded wings have been tested in the past. Probably the most famous example is the Vought XF5U "Flying Flapjack". They work perfectly fine. However, the design as pictured does have some flaws.

The lower the aspect ratio (i.e. wider front-to-back in comparison to their length left-to-right), the more inefficient the wing. This is due to there being a lot of area available for the high pressure under the wing to wrap around to the low pressure on top, creating large wingtip vortices. For the Batwing, this would be doubly true, as a large part of the wings have edges on the inside, almost doubling the effect.

It appears that the engine is either directly behind or directly below the cockpit, putting the center of gravity way too far back compared to the center of lift. This creates an unstable situation, especially at low speed. As the elevator loses effectiveness, the nose of the aircraft will tend to rise, further exacerbating the loss of speed and leading to a stall. Such a stall would be almost guaranteed to be unrecoverable using normal means.

(I say "normal means" because, in the show, the Batwing was shown to have VTOL capability, meaning it has vents in the bottom to redirect thrust down and hover. So, it would be theoretically possible to use engine thrust to rotate the plane nose-down and recover from the stall. If the engine fails, though, this airplane becomes an absolute deathtrap.)

Unfortunately, the animators of the show never animated the control surfaces, so we're left to guess where they are and how big they are. If they're in the standard position in back, that puts them close to the axis of rotation (which goes through the center of gravity, see above), limiting their effectiveness.

The elevators could be moved to the leading edge, but the slipstream on them would cause issues with flutter, and it would take a huge amount of control force to keep them from being pinned at their limits. This also wouldn't help the ailerons (because they'd still be close to their axis of rotation) or the rudder (because there's nowhere to put it other than that big mohawk structure coming off the top of the cockpit).

So, in short, it's possible, but not in any way practical.

Rounded, forward-swept and reverse-tapered designs have all been flown, but never put together.

A rounded example has been given, though it was propeller-driven. The jet-powered Avro Canada VZ-9 Avrocar was a slightly weird VTOL concept which failed to fly properly. Another intriguing one, though intended to be rocket powered, was the Pye Wacket hypersonic missile project.

Forward-swept fast jets include the Grumman X-29 and Sukhoi Su-47.

The Republic XF-91 Thunderceptor had reverse taper. It did what it was meant to do, which was to avoid pitch instability near the stall. But, for rather obvious reasons, it was structurally impractical. The Batjet would suffer the same problem.

The other problem with the Batjet design is centre of mass. It needs to vary from around one-third chord at subsonic speeds to one-half chord at supersonic speeds. The cartoon design has it too far back at around the two-thirds chord position, causing a strong nose-up tendency. Jet thrust at the rear would have to be angled sharply downwards to maintain trim, and this would militate against speeds much higher than a helicopter.

Not the answer you're looking for? Browse other questions tagged aircraft-design theory airframe or ask your own question.

94
Why are the cockpit controls of airplanes so complicated?
6
Would it be feasible for a typical passenger jet to carry along its own Oxidizer?
10
What is the relation between geodesic airframe and geodesic curves?
7
What is the best design for a small flying wing with special flight envelope?
8
How does a PFD handle unphysically abrupt changes in the parameters it's displaying?
6
How does the wraparound wing design reduce drag?
1
Advantages and disadvantages of air intakes above fuselage/wings in jet fighters?
1
Why did the Wright brothers take steps to increase the amount of vertical surface area forward of the CG on some of their aircraft?