How can a designer deal with a strict requirement when designing an aircraft?

I'm following Anderson's and Raymer's ways (trying to find the best for me).

Right now I'm stuck at the step of estimating for the first time the Wing Loading (W/S). Doing the calculations about the W/S constraints (Vstall, Landing distance from Anderson) I found that the Stall constraint is very strict. The result that I get is a W/S = 24 lb/ft2 for a twin turboprop with a estimated gross takeoff weight of 16k lbs. The constraint of landing distance gives a W/S of 62.

Looking at historical data (and some similar aircraft) and Raymer's/Anderson's tables the W/S = 24 is way off the ordinary values. I do understand that it is just an estimation.

What would you suggest to do so I can satisfy the requirement and be able to get a higher W/S?

I thought about changing the flaps that I used (Split Flap) but I don't know if it's possible and realistic to have "Double Slotted Flaps and Slats" for a simple twin turboprop that has a simple mission.

edit: After the comment, here are the equations about the Vstall and Landing Distance. 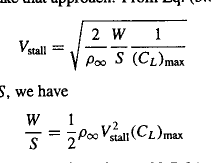 Browse other questions tagged aircraft-design aerodynamics wing flaps or ask your own question.

29
How do aircraft refueling in-air deal with wake turbulence?
14
How do manufacturers engineer their aircraft to deal with tail strikes?
4
How can I get started on a winglet design for a small remote controlled aircraft?
36
Why do aircraft need a vertical tailfin, but birds don't? (and lots of fish do?)
8
During a touch and go (C150) should I first raise flaps or set full throttle?
2
How beneficial are flaps when landing with a tailwind?
4
Is lower wing loading safer?
5
How does a delta wing deal with supersonic boundary separation?