Can an aircraft climb with the thrust line below the line of flight? [closed]

From model building experience and flight, downthrust, angling the (tractor) engine mount down a few degrees seems to relax static stability a bit when full power is applied by counter-acting tail down force and enabling flight at various speeds with less trimming.

The effect in a full power climb would be a higher trim speed than a power off glide at the same trim.

Yet many people on this site strongly feel that lift must be less than weight in a climb.

I think it can be (rockets do this well), but using the wing to climb seems far more efficient, as witnessed by superior climb and distance performance at Vcc (cruise climb) and Vy compared with Vx as seen in this reference

The larger slower wing produces much more force than the smaller, faster propeller. Additionally, at Vx, increased angle of attack, with thrust used to counter additional drag may be a better strategy than reducing wing lift and trying to replace it with a vertical thrust component. Most GA planes will lose airspeed at this point. At cruise climb speeds, the thrust vector may well be slightly below the line of flight, yet less fuel is consumed per distance than even Vy!

Let's apply our "surplus thrust" and see what happens:

In order to maintain vertical lift we:

Here lies the crux of the issue. Most GA aircraft have a thrust to weight ratio of 1:4. Attempting to replace a 300 lb weightlifter with a 75 lb one will have predictable results.

"Lift is less than weight in a climb" is based on the assumption that lift is perpendicular to the thrust line...and the (upward pointed) thrust vector is carrying part of the weight

That's not the best way to do it, and is known as "helicoptering". the wings job is to produce enough $vertical$ $lift$ to make the aircraft "weightless", so the engine thrust only opposes drag. It is extremely wasteful to use thrust to "lift weight", unless the aircraft is pitched at so high an angle as to make the wings drag greater than its vertical lft contribution.

Is there a way to reconcile this academic quandary? 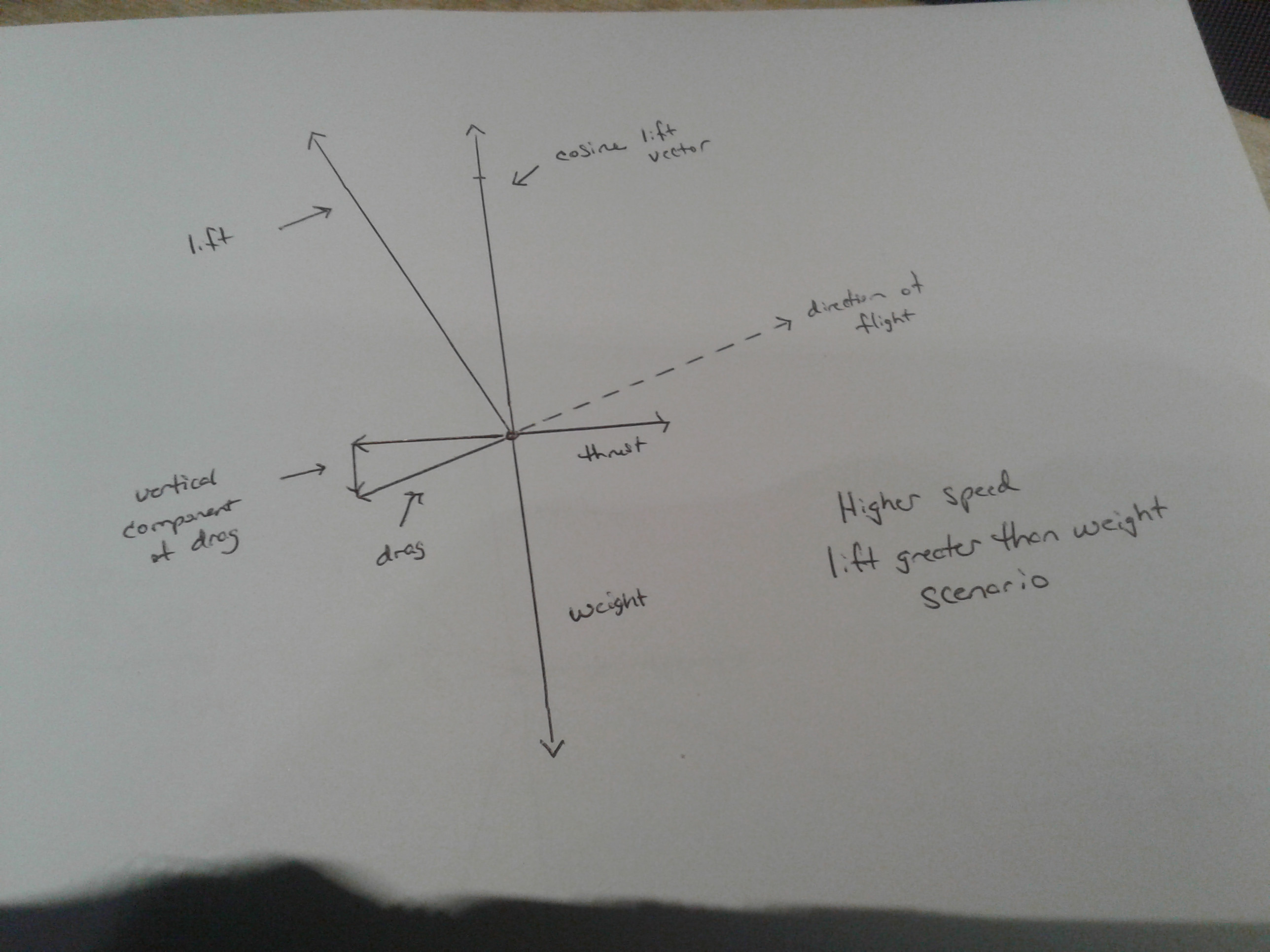 Yes, it can. As you say, that lowered thrust line adds to the lift requirement, but not dramatically so.

I guess the technical term you mean is called downthrust. Together with sidethrust, this offset alignment of the propeller axis helps to reduce retrimming when thrust is changed.

49
Why are push-propellers so rare, yet they are still around?
11
Why do propellers on aircraft have a slight offset angle?

5
How is the climb gradient calculated?
10
About climb: If we use T/W as input, the second grade equation yields two solutions for W/S. Are both solutions realistic?
11
How (and why) does engine thrust change with airspeed?
2
What is physics explanation for minimum sink rate airspeed?
1
Why isn't Vy lower than the speeds for best L/D ratio and best glide ratio in an airplane with a piston engine and a variable-speed prop?