In the context of aircraft design, what are the differences between a flat plate shaped airfoil and a droplet shaped airfoil? [closed]

I am relatively new to aerodynamics and am curious to know what difference it makes on an aircraft - lift, drag, weight etc - which of the two airfoils is used on the wing.

the lift generation mechanisms of these two wing designs are quite different.

Insects use completely flat wings to great advantage. They generate both thrust and lift by shedding vortices in a flight regime in which the wing is operated right at the threshold of flow separation. Dragonflies operate there, and can accelerate from zero to 10 meters/second in one second or less, fly inverted, and execute unbanked turns at full speed.

Cambered wings are used by birds and airplanes and generate lift using (your choice) models based on vorticity and rotational flow, the bernoulli effect, or van Karman vortex shedding.

Flat plate wings will stall suddenly and violently as soon as the angle of attack needed to stall is reached, as the flow separates across the whole wing at once. (Flow separation is when a region of air moving in reverse develops on the wing, causing the airflow on the wing to flow around this region, which creates less lift and more drag.) 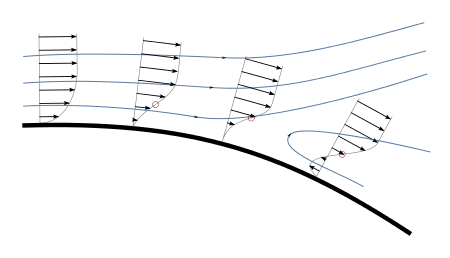 But the greater curvature on the top of the teardrop foil causes flow separation to happen at the rear of the wing first, as angle of attack continues to approach the value needed for stall, warning the pilot that any further increase will stall the plane.

But for supersonic applications, the teardrop foil does not work very well. At these speeds, the extra drag from the bluntness begins to outweigh any other benefit. So, an thin, sharp foil, not quite a flat plate, but pretty close, is used.

28
How do paper airplanes create lift if their wings are flat?
12
What is the difference between flow separation and turbulent flow?

9
How to go about designing a custom airfoil?
13
What is the method to calculate a finite wing's lift from its sectional airfoil shape?
8
Where does the flat plate theory in this paper come from?
7
What are the conditions for an airfoil to be a “thin airfoil?”
5
What is the relation between drag and weight?
0
Winglet design and airfoil selection
0
What is the relationship between the design lift coefficient and the section lift coefficient of a NACA5 airfoil?