Helicopter retreating blade stall: Increasing the fwd speed decreases the tip speed on retreating side and angle of attack. So why limit on V_n.e?

So, with an increase in forward speed, the speed of the wind over tip is getting reduced. In airflow diagram, this will decrease the angle of attack. So, why is there a limitation on forward speed in form of V_ne?

Let's consider a case where rotor of radius 10m rotating at 300 rpm anti-clockwise and chopper is moving forward at 30m/s. So, now the retreating side has got a larger angle of attack of 15 degrees (critical angle is 17 deg) due to blade flapping down. Blade tip speed being = RPM x radius - forward speed = 314-30 = 284m/s.

"Now" if the helicopter fwd speed increases to 50m/s, then the blade tip speed will decrease to 264m/s. Consequently, the angle of attack should reduce. 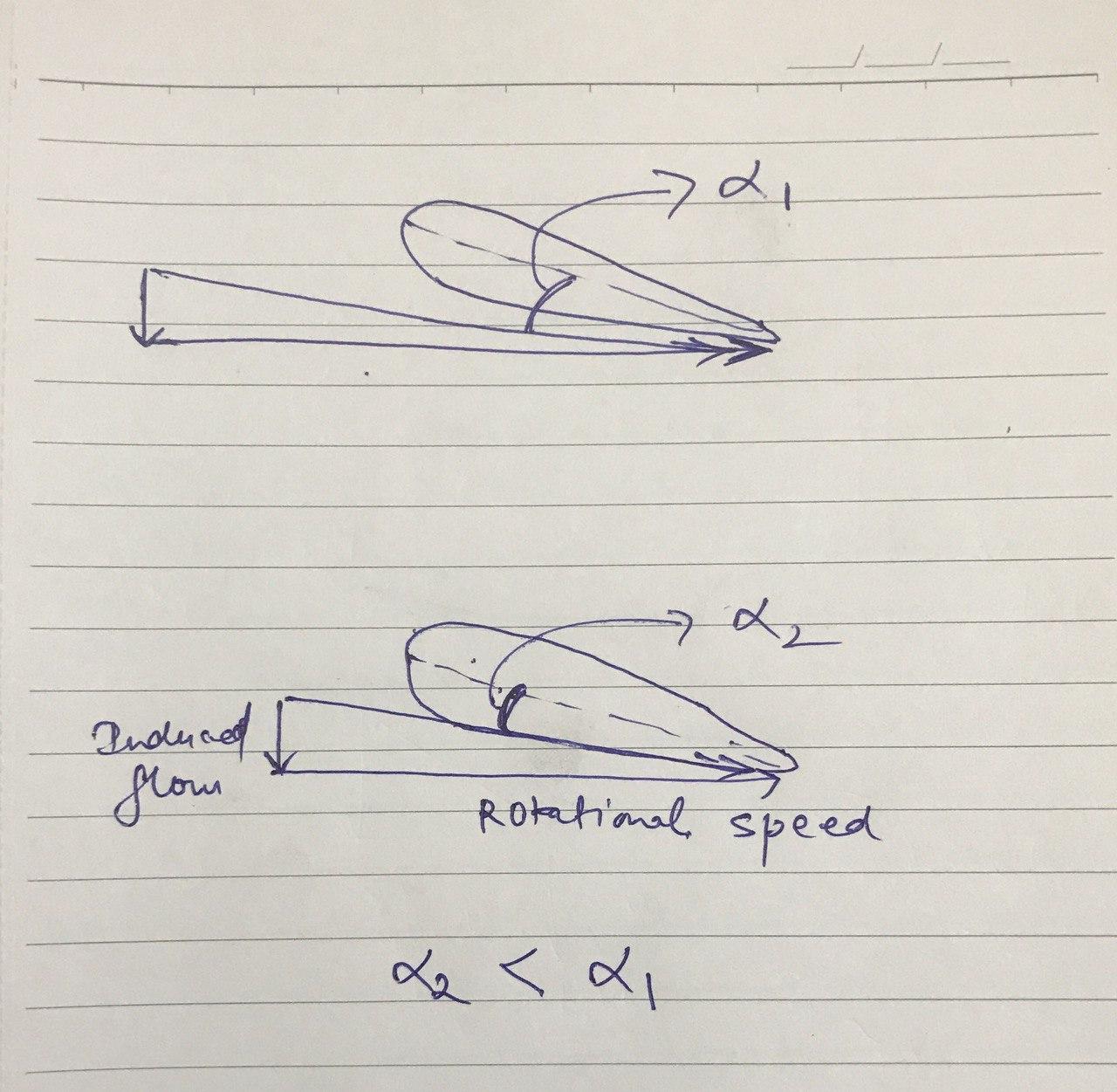 For the same reason aircraft have $V_{S}$ — you don't want to get into stalled condition, because while recovery is possible, it is difficult and far from certain.

Due to the gyroscopic effect, the rotor blades reach the lowest point 90° behind the point of minimum lift. As the helicopter accelerates, the lift would decrease on the retreating side, which would push the aft side of the rotor down, pitching the helicopter up, and reducing the speed again (that is, unlike hover the helicopter is stable in forward flight).

Except the pilot wants to accelerate, so they keep pushing the cyclic forward, which increases the angle of attack on the retreating side (90° ahead of the desired tilt to compensate for the gyroscopic effect), compensating the loss of lift due to the lower air stream velocity.

So the angle of attack is higher on the retreating side because of pilot input, not inherent property of the rotor.

Now when the helicopter reaches the point of stall, the tendency to pitch up will increase, and it won't be possible to compensate it with more forward cyclic, since the retreating side is not able to generate more lift. In this sense, the condition is actually self-correcting as the helicopter will start climbing and losing speed. However

So you still want to avoid getting into the retreating blade stall condition in the first place.

As the helicopters speed increases the angle of attack on the retreating blade will continue to increase. Due to the rotational velocity increasing along the length of the blade, the angle of attack will be greatest at the end. It is this area as the speed increases combined with the blade flapping down which will stall. ('Berp' blades (looks like a paddle on the ends) are designed to retain the boundary layer by creating vortices at the ends and can achieve AOA upto 22-degrees so are designed specifically for high speed flight). When looking overall at high speed flight and Vne, other limitations need to be considered such as airflow reversal which will be occurring at the root on the retreating side (and growing outwards as speed increases), compressibility of the advancing blade and jack stall with the increasing loads which may affect smaller helicopters. Together these will effect the helicopters published Vne. Additionally, if you flew any helicopter on a calm day, straight and level continually increasing speed there would be a point the above aerodynamic effects would occur, assuming you were not first limited by engine/gearbox limitations or lack of forward cyclic position. Whilst this speed could be regarded as Vne, the precise figure needs to consider density altitude (Vne reduces with height), high G manoeuvres, rough/excessive control inputs and turbulence, all of which will lower the maximum speed and will be taken into account for the aircrafts published Vne.

Hi Raj, To further answer your question below. If the Blade tip = speed of rotation - forward speed hopefully you would agree the reduction in speed of the retreating blade would cause a loss of lift. In which case the helicopter would roll in that direction (notwithstanding phase lag etc). So before you consider what's happening with high speed flight you should understand how lift is maintained equally across the rotor disc in normal flight. If you consider the lift formulae, you can create more lift by either making the aerofoil go quicker (the advancing side) or increasing the angle of attack (retreating side). This is precisely whats happen with the rotor disc. Consider a rotor blade in forward flight starting in the 6 O'Clock position and rotating Clockwise. As it move to the 9 O'Clock position it gains more lift by the virtue of increasing speed. In doing so it flaps up. As it flaps up the induced flow increases which reduces the angle of attack. (The blade reaches it's max rate of flapping up in the 9'oclock position and it's highest point at 12 O'clock position). As the blade travels towards the 3 O'clock position, it starts to lose the airflow over the blade so begins to flap down. As it flaps down the induced airflow reduces and the angle of attack increases, maintaining the same amount of lift this time with a large angle of attack and low air speed (again, the maximum rate of flap down is in the 3 O'clock position and the blades lowest point will be back in the 6 o'clock position). This is how lift is maintain constant across the disc at all times (except when manoeuvring or problems with high speed flight) and why the angle of attack increases on the retreating side. It's called 'Flapping to Equality'

All else equal, you are correct that the angle of attack on the retreating blade tip will actually decrease, not increase. As you calculated, the horizontal component of the flow shrinks, causing the inflow angle to grow (and effectively shrink the angle of attack).

However, the "all else equal" isn't realistic. Unless there's angular acceleration of the rotor/aircraft, the lift is balanced around the rotor. The lift on the retreating side must approximate the lift on the advancing side. This is accomplished with forward cyclic and blade flapping. Since the dynamic pressure on the retreating side is smaller, as you pointed out, the cyclic/flapping made the angle of attack much larger (to balance the lift). It's this net result, after accounting for cyclic/flapping, where you can see the retreating stall must eventually occur.

Not the answer you're looking for? Browse other questions tagged aerodynamics helicopter flight-controls general-aviation stall or ask your own question.

35
How does stall depend on angle of attack but not speed?
1
Why does stall speed decreases with increasing aspect ratio?
4
Why does the rotor thrust decrease at smaller tip clearance for shrouded rotor?
4
On a constant speed propeller, how is blade pitch related to airspeed and efficiency?
3
How are pitching and rolling moments transferred from rotor to the body?
5
Is it possible to stall a stationary helicopter through excessive collective input?
2
Retreating Blade Stall, P-Factor, and Gyroscopic Precession