How do linear actuators for flight controls work in fighter jets?

I've built some rc planes and know that in order to control an aileron in a rc plane, that you need a servo, a control horn(sticking out of the aileron), and a pushrod. However, I was wondering how fighter jets control their ailerons. I was researching and I found that it control is via linear actuators. I was wondering how exactly it worked and tried to look for a video or an animation. However, I couldn't find anything that explains exactly how a linear actuator moves an aileron. Can you please help me understand this with a video or something like this. Thanks so much.

This is a picture of an f22 raptor someone sent me when I asked this question on Flite Test...they didnt respond after this this. You can see orange actuators in the picture but it doesn't really help me besides that. https://conceptbunny.com/lockheed-martin-f-22-raptor/

The working principle is surprisingly similar between the RC as you've described and most actuator powered aircraft. The linear actuator extends/retracts a pushrod, which is connected to a horn attached to the pivot point on the control surface.

Below is the zoomed-in picture from the OP. I've taken the liberty of highlighting the two rudder actuators and the left stabilator actuator. The one attached to the stabilator is the most revealing: the pushrod essentially connects to a horn, which translates the linear motion to a rotational one. 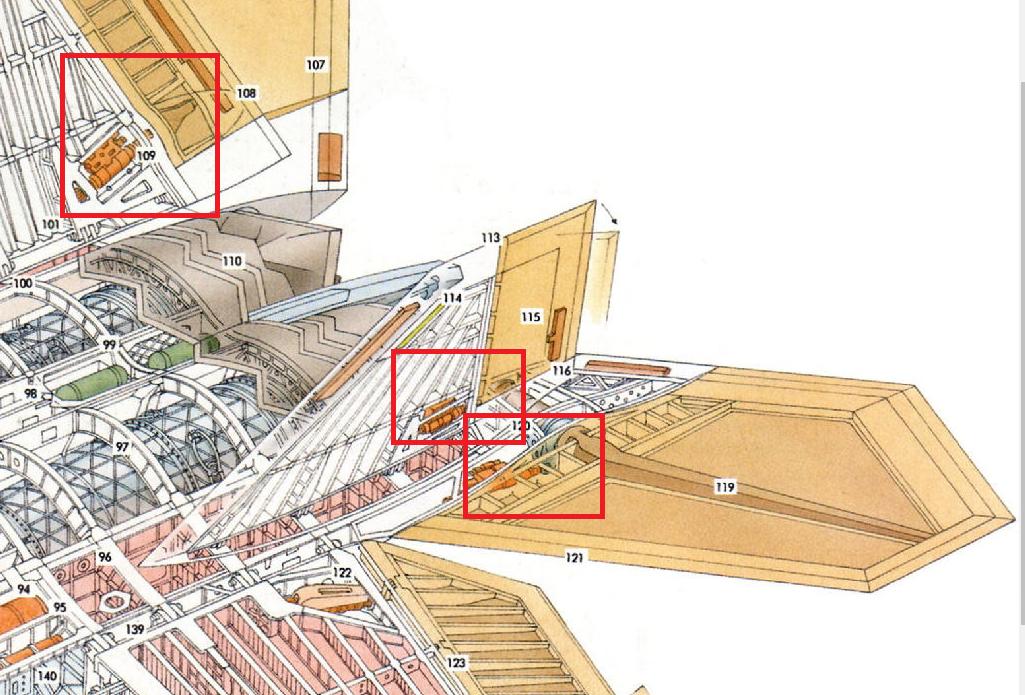 Due to aerodynamic and stealth reasons, this mechanism is hidden under a smooth fairing for the F-22. But for other airplanes, you can see small blisters under their control surfaces that fair the actuator. Below is a picture of the Boeing 787 aileron. The blisters have been highlighted. 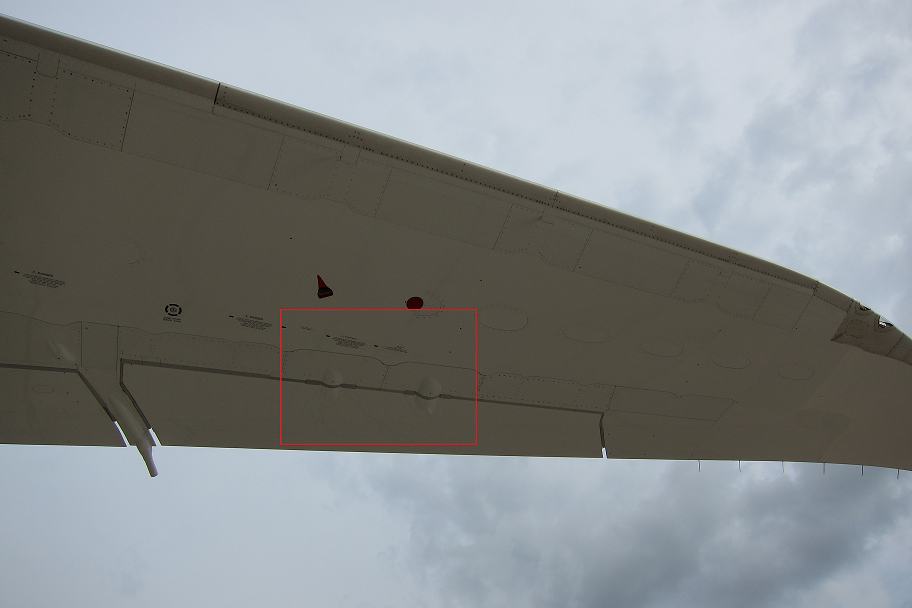 The linear actuator itself is almost always energized via hydraulic fluid, whether it comes from a central hydraulic system or an self-contained hydraulic systems (EHA). The following diagram illustrates the working principle:

It's really not so different from your models. Due to the strength of hydraulic actuators, those horns need not stick out into the airstream. Basically, if you move the hinge into one skin, you have most of the local thickness for hiding that horn.

Here is the interesting section from the linked picture. 125 is the control unit with the valves and 126 the actuator. 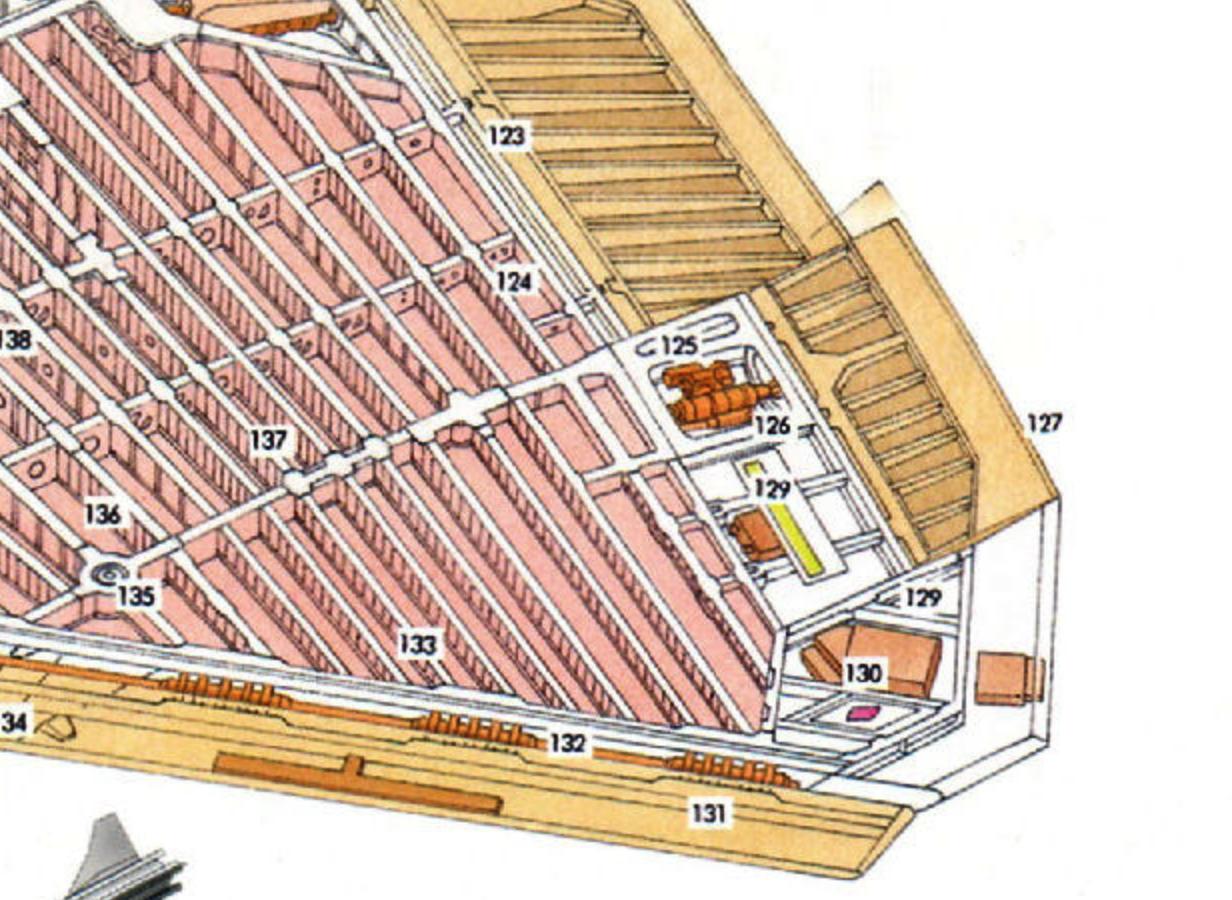 However, in order to keep forces down, a small bulge is needed on the lower wing to fair over the horn that would otherwise stick out of the surface (picture source). The near one is for the aileron and the far one for the wing flap. 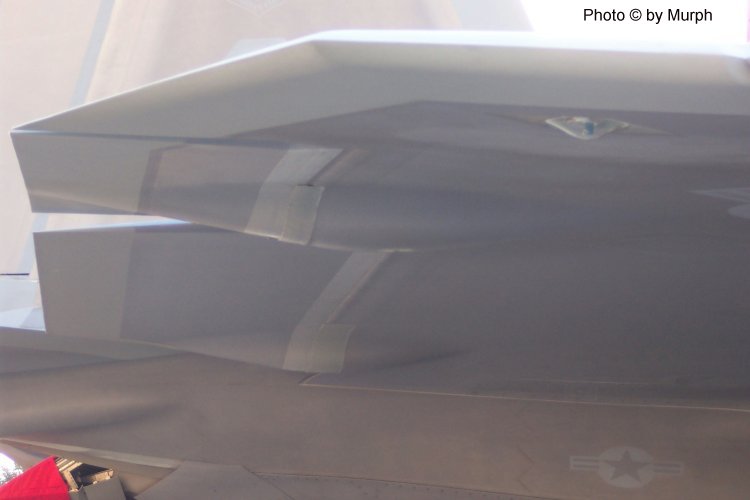 Below is a diagram for the F-15: Here the hydraulic actuators are controlled via pushrods and pulleys. On more modern aircraft this will be an electric line and probably even an electro-hydraulic unit so no hydraulic lines need to be strung trough the wings (picture source). 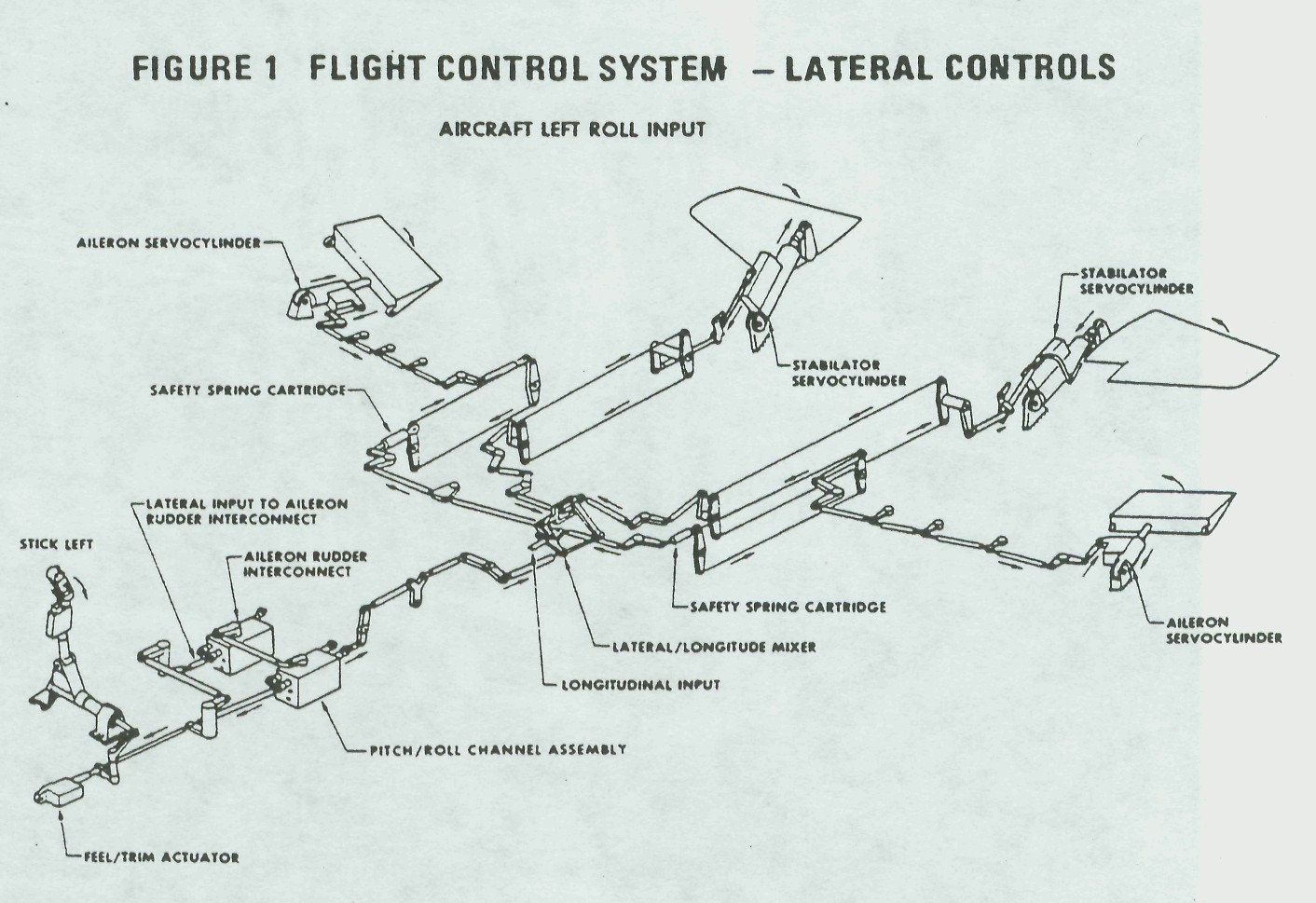 The valves are controlled by cables or pushrods, as can be seen in the F-15 Lateral Controls diagram. On more recent designs, electrical control is used with a central computer calculating the best valve settings several times per second.

Why hydraulics are a good choice for such actuators can be read here.

Not the answer you're looking for? Browse other questions tagged flight-controls control-surfaces ailerons or ask your own question.

1
How does a linear acuator in flight control work?
33
Why do aircraft use hydraulics instead of pneumatics?

41
Why do flight control cables not slacken during the cold temperatures at cruise?
3
How does hydraulic actuator servo valve feedback work?
3
What is the function of activating an individual elevator on the B-1B Lancer?
5
Where is the control loop of the actuator closed?
3
How do a helicopter's cyclic and collective transfer commands to the swash plate?
7
In simple mechanical stick linkages, is there crosstalk between the aileron and the elevator movement?
1
Is this how ailerons are actuated?
6
How are the 737’s elevator and aileron cables attached to their control tabs without impeding the control surfaces’ motion under hydraulic power?