Do you ask ATC for HILPT?

This specifically pertains to VOR approaches, but I guess it can apply anywhere else that has a hold in lieu of procedure turn (HILPT) also. There are numerous examples but let's try one: KUKI VOR-A.

If you were approaching from say the North (thus a teardrop entry is most suitable), does the hold constitute your course reversal, or must you conduct the procedure turn to get established for a simple ASEL? 5.3 miles out seems pretty good to get distance to get established, but maybe I'm missing something as an early instrument student? Do you have to contact ATC to let them know this is the way you'd conduct the reversal? 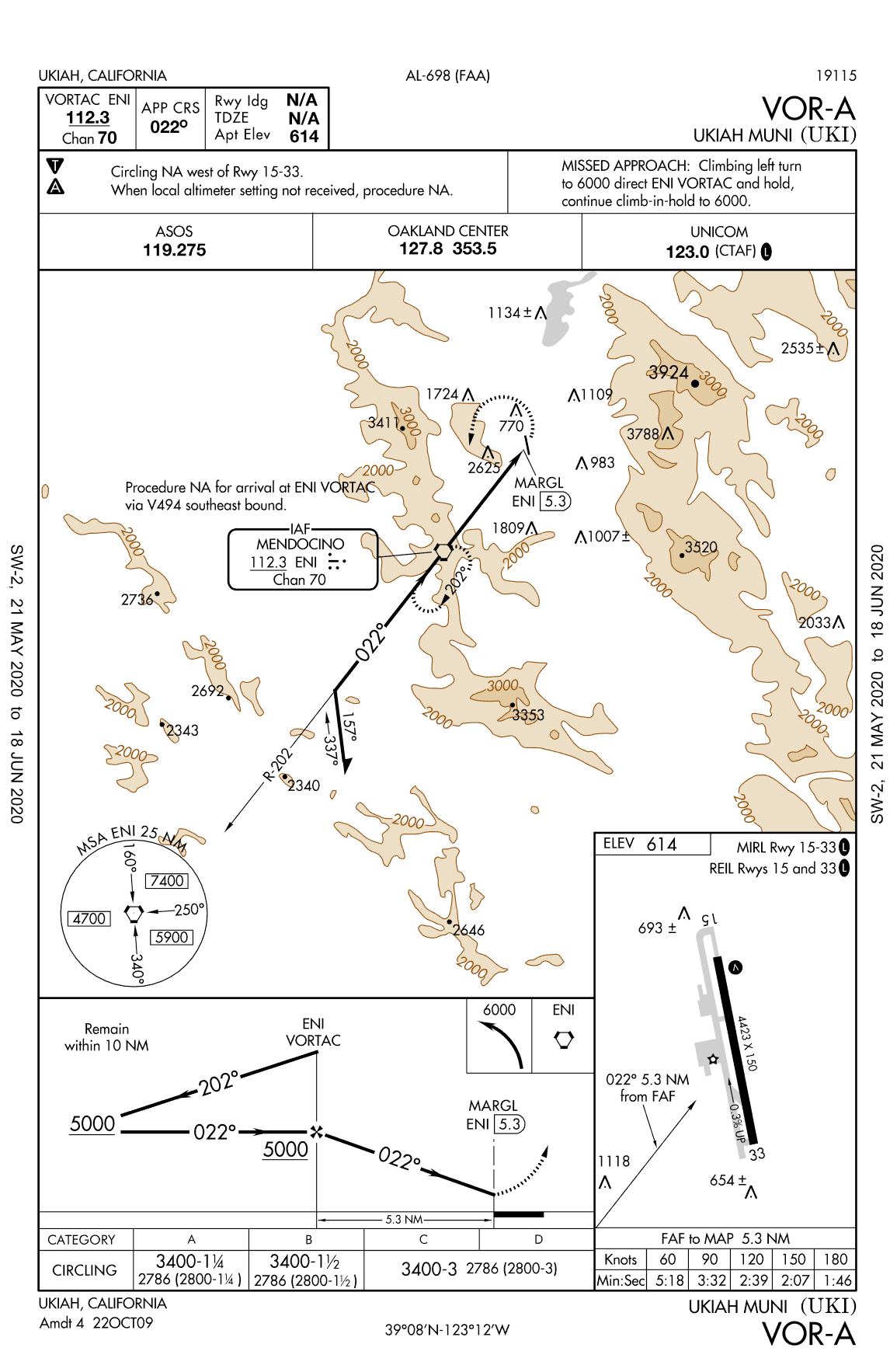 Typically, the way that it works in my local area is that the pilot would request the full procedure when wanting to use a course reversal. This would be interpreted by ATC to mean the pilot was going to fly direct to the IAF requested by the pilot when requesting the IAP. ATC would then vector the pilot in a manner to get the pilot to intercept the course at the most advantageous angle. The pilot may request to self vector, though. The pilot would then fly outbound on the IAP for the PT.

The PT has to be done along the outbound course. Though there is not a specific distance the pilot must fly in order to do the PT, it has to be flown in such a manner that the aircraft does not exceed a specific distance. The pilot can, however do the PT in as little a space as that provided by a hold.

If the pilot chooses to use the hold as a course reversal instead, they would request the hold first. They would follow that request up either with another radio call or within the same radio call with stating the intent of using the IAP to approach for a landing, touch and go, low approach, etc.

If the pilot does not make their intent clear when requesting the approach ATC will ask for the pilot to state their intentions. On a slow day, they may just ask you to report the FAF when inbound for a landing.

Remember though, the procedure for using an IAP would be to have your aircraft established on the lateral guidance, fully configured for a landing, at or prior to the FAF. That would preclude the possibility of flying directly to the FAF from any other angle or direction, then descending down for a landing. Because of that, ATC would be expecting you to do some type of course intercept or course reversal on the intermediate leg.

In the case of an airport like KRWL, if I clear you direct FIKLA, I expect you to do a hold in lieu of procedure turn. 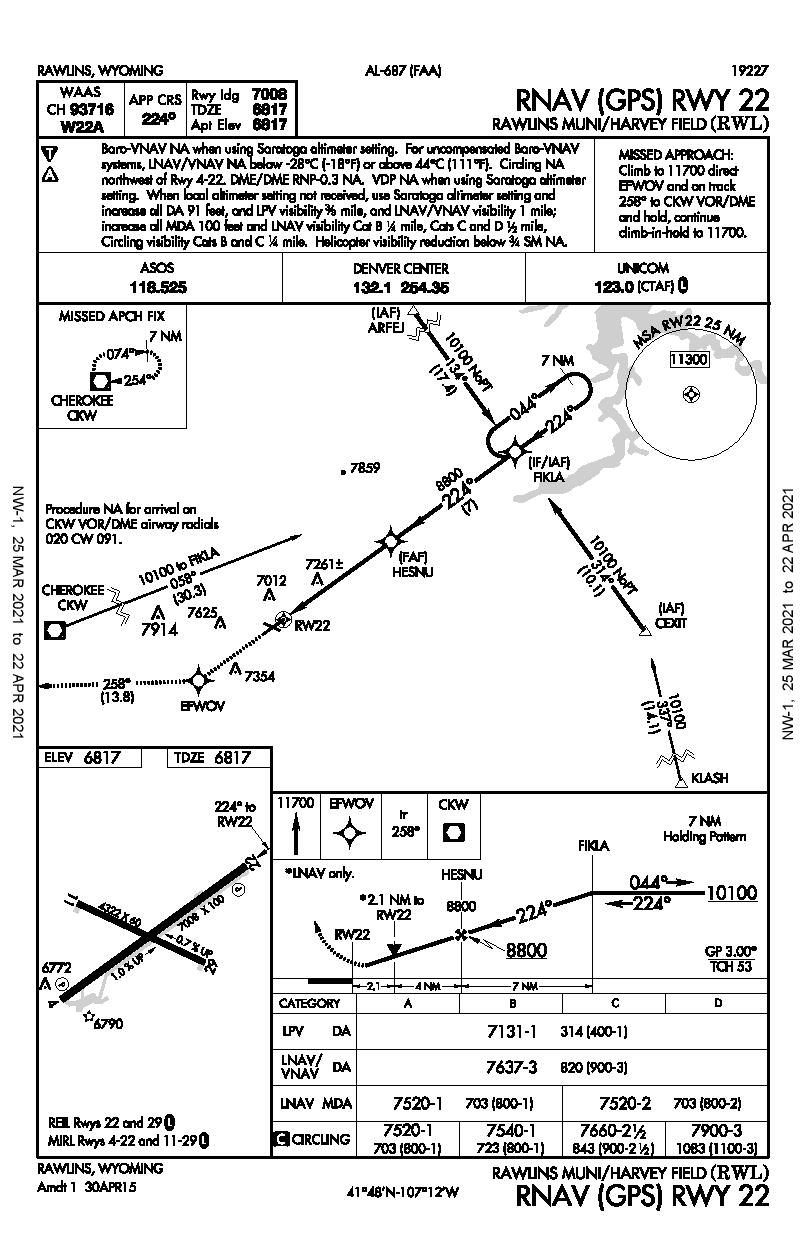 If I clear you direct FIKLA, I've put you on a random GNSS route, and I have to keep you in radar coverage until you get to FIKLA. For KRWL, this means keeping you at or above 12,000, which is almost 2000 feet above the start of the profile. You need that hold-in-lieu to get your aircraft down to an altitude that's safe for starting the descent profile.

Even if I could clear you down to 10100 (too much granite in the way), I'd expect you to make a hold-in-lieu at any angle over 90 degrees, and would protect the pattern. The only time I would not protect the pattern with a direct FIKLA routing would be if I specifically cleared you for a straight-in approach, which has its own conditions, including the GNSS radar requirements.

In KRWL's case, I would probably give you either the ARFEJ or CEXIT transitions (which also need 12000 on a random route), and let you get the aircraft down before FIKLA. Note that these are "NoPT" legs, so I will not protect the hold-in-lieu on the back end, only the route legs.

Not the answer you're looking for? Browse other questions tagged faa-regulations iaps holding or ask your own question.

27
If there is a misprint on an instrument plate, is a pilot required to comply with it?
32
What should you do when ATC gives you a number to call to discuss a violation?
8
How do you determine whether you can us LNAV/VNAV minima on an RNAV approach?
7
Why are some LNAV/VNAV mins lower than the LPV mins for the same approach?
5
When a hold is distance based, do you still used a timed entry?
3
Are you required to fly a full hold when doing a course reversal?
0
Does a hold-entry count as a hold for instrument currency?
4
When can I proceed inbound in a hold in lieu of a procedure turn when cleared for the approach?