Is it allowed and possible to hold at the intersection of two VOR radials using a single VOR receiver?

First of all, is it permitted? I am practicing VOR tracking on my simulator and the missed approach procedure (KLGB VOR 30) takes you out to an intersection off two VOR radials. Since the plate doesn't specify "DME required" I figured yes.

Assuming yes, are there any tricks/protips to doing this successfully?

As I understand it you are asking two questions:

Answer to question one:

As others have mentioned, it was permitted at one time (and I believe it is still permitted). I'm old enough to have received training on how to do it at a time where it was much more common to fly in GA aircraft with no DME or GPS and sometimes only a single VOR receiver. I spent over an hour researching this question for you in the AIM, Airplane Flying Handbook, Instrument Flying Handbook, and Instrument Procedures Handbook, and online generally, and was not able to find anything saying it was permitted or prohibited. I don't see any problem with it other than it adds a bit of workload to the pilot, but it can be done safely and relatively easily. If I find an definitive answer I'll update my question.

Here are some tips and tricks for flying an intersection hold with nothing but a single VOR receiver. This explanation assumes you know how to hold, including the FAA recommended hold entries.

In the figure below the aircraft is on the main radial and is approaching the cross radial from the West. However, this aircraft could also be approaching from the opposite side of the fix from the East.

So, while you are on the main radial flying towards the fix, you want to spend most of your time monitoring the main radial because it is your primary course navigation, however, you also want to initially tune the cross radial well before reaching it in order to verify, and take a mental note of which side the CDI is deflected. This can be confusing to some pilots because the CDI will be either on the right or the left depending on where the station of the cross radial is located in relation the main radial. (When you fly a G1000 or HSI, the CDI rotates such that it is easy to tell when you are approaching the cross radial or have already passed it, but this is not the case in stand-alone old-school VORs). Whether the CDI of the cross radial is on the left or right also depends on if the pilot tuned in the radial or the reciprocal. For simplicity in this example, lets assume you tune in the cross radial well before reaching the intersection and the CDI is fully deflected to the left.

You then re-tune the main radial (hopefully your NAV radio has a flip-flop button), and center the CDI. You want to be as precise as possible and note the wind correction angle required and bug that heading! It's important to be precise, because you will be flying the bugged heading when you switch to the cross radial.

As you fly towards the holding fix on the main radial you will periodically switch back and forth to the cross radial until you detect the CDI is alive. At this point, you want to watch the CDI to get an idea of how fast it's moving. I like to take a note of the deflection of the CDI, lets say it is 8 degrees to the left (still haven't reached it), then take a note of the clock to determine how long it takes to fly 1 degree. Let's say that it takes 30 seconds to go from 8 degrees to 7 degrees, if so, then you know you have approximately 3.5 minutes before reaching the holding fix (7 degrees x 30 sec/deg = 210 sec or 3.5 min). You can then switch back to the main radial and continue navigating on it, until about 1 minute before you reach the intersection, at which point you would tune in the cross radial and fly your bugged heading until the cross radial is centered. At which point you would peform the appropriate hold entry.

At the moment you reach the holding fix, you will be flying the bugged heading and the cross radial will be tuned into your VOR. If you are on the main radial on the inbound heading, then it will be a direct entry and you just turn (right turn in the above figure) and fly outbound. On the outbound leg, tune the VOR to the main radial to the inbound course so that you can intercept it when you turn inbound. If you are approaching the holding fix from the opposite direction (from the East in the above figure) such that you are flying the outbound heading of the hold, then you will need to do a teardrop or parallel entry. In this case, I like to do the parallel entry because it requires less math and turning. Since you are already flying the outbound heading and are parallel to the inbound course you don't have to do anything when you reach the holding fix from this direction other than start the timer or take a note of the time and fly out for 1 minute. During this one minute of flying outbound on the parallel entry, you will tune in the main radial to the inbound course, so that when you make your greater than 180 degree turn you can intercept the inbound course.

Then repeat until you're ready to leave the hold.

This was a long explanation, but it's really not as bad as it sounds. When you are practicing this on the sim, you can try flying 2 minute legs, which gives you more time to intercept inbound, then tune the cross radial. As you get more efficient, you can shorten the legs until you get to 1 min. BTW, in actual IFR, you can ask ATC for a non-standard leg length. I imagine any airplane in this day an age with no DME or GPS that only has a single VOR is probably a very very slow airplane, and ATC can probably accomodate 2 or 3+ minute legs, just ask.

There are no regulations that I am aware of requiring that more than one VOR receiver is required when holding at a fix (unless specifically specified, which I have never seen for an enroute holding fix). The fundamental requirement is that when holding, a pilot is expected to remain within the protected airspace. Remaining in the holding pattern protected airspace is the reason there are airspeed limitations based on the altitude you are holding at (unless otherwise stated or published). Also, as noted in the Aeronautical Information Manual (AIM), there are also recommended entry procedures developed to assist the pilot in entering the holding pattern and remaining within the designed protected airspace.

As noted below in the Tullahoma VOR Rwy 6 approach (shown below), if you want to use the lowest minimums, dual VOR receivers are required. Apparently, the determination was made that in order to remain precisely within the protected airspace for the approach (using the lower miminums - smaller protected airspace) a second VOR receiver was necessary to avoid any unintentional drift outside the (narrow) protected airspace while switching back and forth between VOR frequencies and the applicable radials.

As for a technique to use a single VOR receiver to identify and hold at an enroute fix, there are many. In my opinion, it is primarily necessary to focus on the heading necessary to hold the course you are using while approaching the fix and calculate the wind direction and speed and then use that knowledge to adjust your heading while entering and turning in the hold. Verifying the accuracy of your wind direction/speed (and ultimate heading you choose depending on where you are in the holding pattern) is made by switching the VOR frequency and radial at appropriate times (e.g., wings level, lower workload position in the hold) and adjust as necessary.

Lastly, there are probably many different recommendations from pilots who read this post as to how best to use a single VOR receiver for holding. The above is just my opinion. 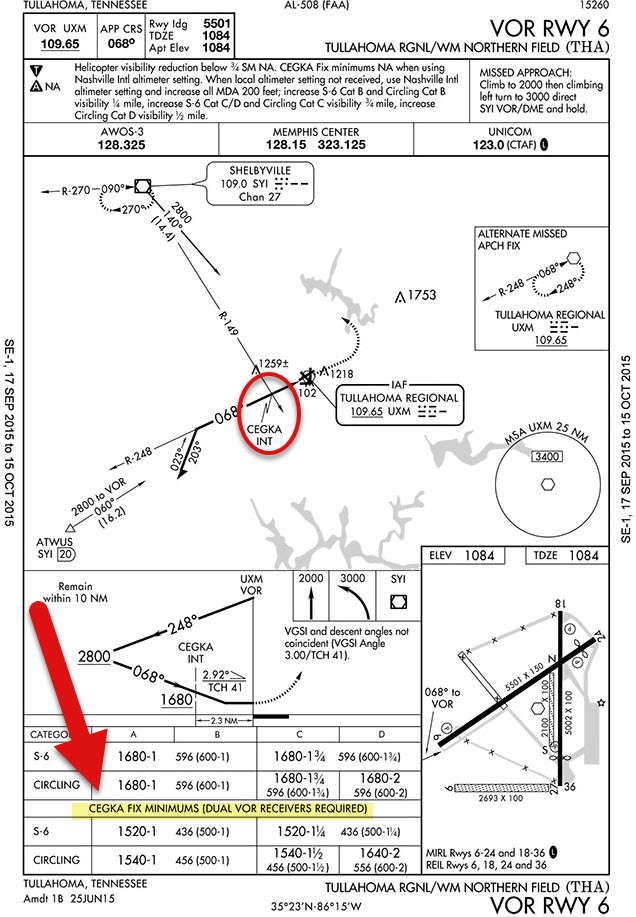 I always find it easiest to track inbound to the fix using either a radial, bearing, or GPS direct-to to the fix. When using VOR and DME, it is easiest to intercept the identifying radial way prior to reaching the appropriate distance. If you are using two VORs to identify the hold fix, intercept one of the identifying radials using one of your OBSs first. Use your other OBS to identify your second radial. Which OBS you choose depends on the radial or bearing of the fix along which you will be holding. That should be your primary OBS.

One of the holds given to me by the DPE on my instrument checkride was an unpublished hold at a self-declared, unofficial waypoint/fix. Since, I was on an IFR flight plan, I had to request the hold from ATC with the following format.

Skyhawkxxxxx, requesting a hold xx direction on a ### bearing, ## nautical miles and XX direction from intersection xxxxx, along the ### radial of xxxVOR, 1 minute legs, standard turn, at #### feet.

Admittedly, this was a bit of an over the top scenario given by the DPE. He was a legacy carrier captain who believed in making sure he tested beyond the capabilities of the magenta-line generation. It was more of a test of how I could think through, draw out , and communicate the hold while maintaining directional control under the hood rather than how to fly it. The bearing from the fix put me right in line with the IAF of my first IAP that had a hold-in-leau of procedure turn anyway.

Not the answer you're looking for? Browse other questions tagged pilot-technique vor holding or ask your own question.

11
How does the VOR receiver pick up the signal and how are the needles controlled?
22
What is the difference between conventional VOR and Doppler VOR?
4
Could a pilot navigate using distances and radials from an RNAV waypoint, similar to VOR navigation?
1
What does the letter "D" next to the VOR frequency and name mean?
1
When/how to set the inbound or outbound course when intercepting a VOR for a DME hold?
1
Is a VOR usable on the ground when it's located at a higher elevation than the receiver?
1
How does the ICAO VOR separation apply to reciprocal radials?
4
Having trouble reading some charts (SBMG-SBLO)
8
Why is the VOR reference and variable signal modulated at 30 Hz?