In my simulator (flightgear) directional control during take-off of most tail-draggers is extremely difficult. When the tail lifts off, it immediately starts to turn to the left with no crosswind, but with sufficiently strong crosswind from the right it might be to the right. It takes very swift and hard rudder application to arrest and then easing the pressure to avoid overcontrolling. Otherwise the turn rate keeps increasing and ground loop occurs.

It is worse with some models than others. Some models are almost impossible to take off at full or normal take-off power and while most are, it is very difficult to keep them on the runway, because even if I manage to arrest the initial swerve, the aircraft is then turned a bit and attempts to re-align it tend to again provoke ground loop.

Controlling propeller aircraft with tricycle landing gear is on the other hand never difficult, even for the more powerful ones.

I suppose some of the models are wrong. For example the Pitts S1C model is almost impossible to take off. But how difficult should it really be to keep the plane aligned?

And, what would likely be wrong with model that is too difficult to control? Centre of gravity too far aft of the mail landing gear? Or something with the vertical stabilizer? There does not appear to be any parameter for vorticity of the propeller slip stream; it is apparently calculated from the power.

Or is this one of the cases where simulator is much more difficult than the real thing, because in the real thing you have force feedback and get to use your built-in accelerometer (vestibular system) and in the simulator you don't?

What you're experiencing is the natural tendency of an aircraft to turn left under high power.
Several forces combine to cause this as shown in the diagram below: 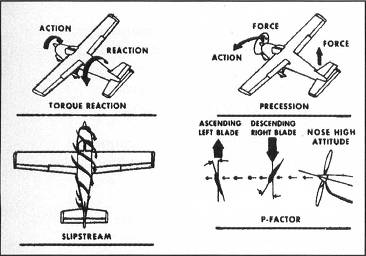 (These forces are also discussed in this YouTube video which is worth a watch.)

The left-turning tendencies are more pronounced in higher powered aircraft (more torque). They are even more pronounced in tailwheel aircraft when the tail comes up because you no longer have a third point of contact with the ground resisting the forces, and the pitch change exaggerates the effect of gyroscopic precession. (Similarly when the tail comes up in a strong crosswind the aircraft has an even higher tendency to weathervane into the wind, because there's no third point of contact with the ground fighting its tendency to pivot).

The position of the center of gravity relative to the gear also contributes to some of the differences in handling on the ground (and their tendency to ground-loop), but it's probably not the major factor in the difficulty you're describing.

In regard to your difficulty fighting the aircraft's left-turning tendency, part of this is undoubtedly the fact that a simulator has poor (zero) feedback compared to sitting in an actual aircraft, but some of it probably has to do with your technique: You're describing very swift and hard rudder application, and frankly no aircraft is going to like that (and tailwheel aircraft will make their displeasure known in the swiftest possible ground-loop).

What's called for instead are smooth control inputs - advance the throttle slowly, feeding in enough rudder input to track the centerline as the engine power increases. Remember that ultimately you're balancing forces that are changing: Slipstream and torque reaction are more pronounced as the engine develops more power, P-factor varies depending on the aircraft's pitch angle, and the effects of precession vary as you change the aircraft's pitch angle (applying forces to the rotating propeller).
While these forces are changing the force exerted by the rudder is also changing, becoming more effective as you accelerate.

Because of the way these factors combine the corrective forces you need to apply with the rudder aren't constant, and your feet should be "dancing" on the pedals making small corrections all the time as smoothly as you can (a little wiggle on the centerline is far preferable to stabbing at the pedals and making the aircraft pirouette on the runway).

Since you're using a simulator you can practice all of this in a no-wind situation to get a feel for the aircraft and the sort of control inputs that will be required (and ideally you can start with a trainer aircraft like a J-3 cub, and move up to something with a bigger engine as you get comfortable). You can also do high-speed taxi runs (with the tail up) to get a good feeling for how everything interacts, without having to worry about breaking a perfectly good aircraft if you ground-loop.

Disclaimer: I've got all of 1 hour in a tailwheel aircraft and the best I can say for my advice above is "by following that advice I didn't ground-loop the thing!"
You can probably get far better advice from a CFI with tailwheel experience, or a tailwheel pilot who's done it far more (and probably far better) than me!

Your simulator gives you a realistic experience: This is normal. What you experience is the gyro effect of the propeller and engine while you change the pitch attitude. When you lift the tail, the axis of rotation is changed and the engine-propeller combination pushed downwards, causing a precession force which acts orthogonally to the plane defined by the down movement and the axis of rotation.

Since the engine is forward of the center of gravity, this precession force is pushing the nose sideways: Left for a propeller which spins clockwise (when observed from the pilot's viewpoint), and vice versa.

The best way to avoid a change in direction is to keep the tail to the ground with the stick aft until you know you are fast enough to lift the tail, and when you lift the tail up, you apply rudder simultaneously. Don't let the tail come up by itself!

I learned this in a Dimona motorglider. Now think of flying a small, light airplane where the propeller is bolted firmly to the heavy engine crankcase, both rotating. The airplane will dive or climb when you change direction! This is what pilots had to endure in the First World War, when they flew aircraft with rotary engines. When engines became more powerful, this became so bad that some aircraft were almost unflyable. See this answer for more.

That crosswind is turning the nose into the wind after lifting the tail should also be no surprise: While the main gear is still on the ground, the plane will weathervane into the wind once the tail is lifted.

I have not flown that many taildraggers, but some can be kind of twitchy like you describe.

Like most things in flying the trick is to not get behind. If you anticipate needing some rudder as you feed in power get the control input in before the power. Also, remember as the aircraft picks up speed the control surfaces will be more effective, so you need to moderate your control inputs.

You also have to compensate for the descending prop blade causing the center of thrust to shift off center because of the high angle of attack of the prop blade as you start rolling. This commonly called p-factor.

Each plane, let alone model of plane, tends to be unique in it's handling characteristics. While I have never flown a Pitts I can imagine that since it has a lot power (big p-factor), short fuselage (short moment, lower longitudinal stability), and rather big control surfaces (small input, big effect) it would be a handful. Maybe you should try something easier for a bit like a Piper and get that down. Then work up to a stable plane like a Cessna 185, and a twitchier plane like a Citabria, and then onto the Pitts.

Also, I think the Pitts does not have flaps, so you will probably need to slip to a landing. That is really fun and it also provided good runway visibility since you are coming in at an acute angle to the runway.

I have a few hundred hours of taildrsgger time, both airplanes and gliders. Even though gliders don't have an engine they have to be kept flying straight especially when the tow rope hook is under the CG instead of the nose.

There are two things that matter, practically speaking:

I won't elaborate on the physics of what's happening since voretaq7 explained that topic pretty well (thankfully). I will concentrate on a more practical understanding.

It's not difficult, you just keep the plane straight...at all times, no matter what it takes. I would say your simulator isn't very accurate in portraying real-life tail-dragger characteristics. I have never flown a Pitts, however of the other tail-draggers I have flown, they are not extremely difficult to keep straight, just attention.

what would likely be wrong with model that is too difficult to control?

One where the aircraft does not have enough rudder-authority to compensate for either:

These characteristics seem to be more per-dominate by the design of an aircraft as well. (short-coupled and narrow-wheelbase aircraft being in that group). I do not know much about physics, so I can't elaborate on the why, other than I know from experience.

I find that once the tail is up and flying, it is EASIER to keep the airplane straight, you have more rudder authority (i.e. control) of the aircraft to main directional control, but that may be just me.

In short, flying a tail-dragger is not all that difficult, it sounds like your simulator does a poor-job giving tail-dragger flight characteristics. With that said, I also find simulators to feel very un-natural.

As far as flying a real tail-dragger. It takes a bit getting used, but it's like anything else. Once you get the hang of it, your good to go.

Desktop PC simulators are a waste of time and not at all realistic, the "full-motion" ones airlines use are lightyears better... but obviously nothing beats the real thing !

Not the answer you're looking for? Browse other questions tagged flight-controls tail-dragger or ask your own question.

3
Why do light taildraggers swirl uncontrollably on runways in a simulator?
39
Do turbine engines on multi-engine aircraft rotate in opposite directions to offset torque?
2
How can an airplane fly with single propeller without rolling over?

6
How does a taildragger steer (taxi) differently to tricycle gear?
5
How do you check for soft or muddy ground on a backcountry landing?
51
How do hot air balloon pilots avoid collisions?
6
Why does the A320 use the rudder for lateral control in mechanical law?
1
How much force is produced by control surfaces?
5
Why is the 707’s yaw-damper-out lateral controllability marginal to nonexistent with flaps and spoilers extended?
5
Where is the control loop of the actuator closed?
0
In F/A-18, where the servo-loop closure is accomplished?
1
Does a RC glider always loop when launched?