Is the turning error of a magnetic compass greatest when tuning through South in the Southern Hemisphere?

The turning error of a magnetic compass in the Southern Hemisphere is greatest when turning through South. Is the statement true or false? And why is this/isn't this the case?

“The turning error of a magnetic compass in the Southern Hemisphere is greatest when turning through South. Is the statement true or false?”

I am going to answer this question for a second time and delete the first try. It was a mess. Hopefully, this one will make more sense even though it has the same information. Just a better structure.

There are three factors that would explain why turning errors are greatest when turning through North and South. They are specific to the aviation wet, liquid-filled, or whiskey compass. Officially, two of them are magnetic dip and acceleration errors caused by magnetic dip. Unofficially, the final one is the counterintuitive way that you have to read the compass.

The magnetic compass turning errors that we usually identify as UNOS and ANDS while in the Northern hemisphere are caused by a combination of magnetic dip and the off center balancing of magnetic dip. As you have stated in your comment, a compass has the tendency to dip it’s North-seeking element down towards the Earth in the Northern hemisphere. The same is true for the South-seeking element in the Southern Hemisphere. The Northerly turning errors (UNOS) are greatest (up to the same amount of error as your degree of latitude) when turning through North or South.

In the picture below, the black text is the actual direction to which you are turning. The red text is the amount of compass error at 30° latitude. 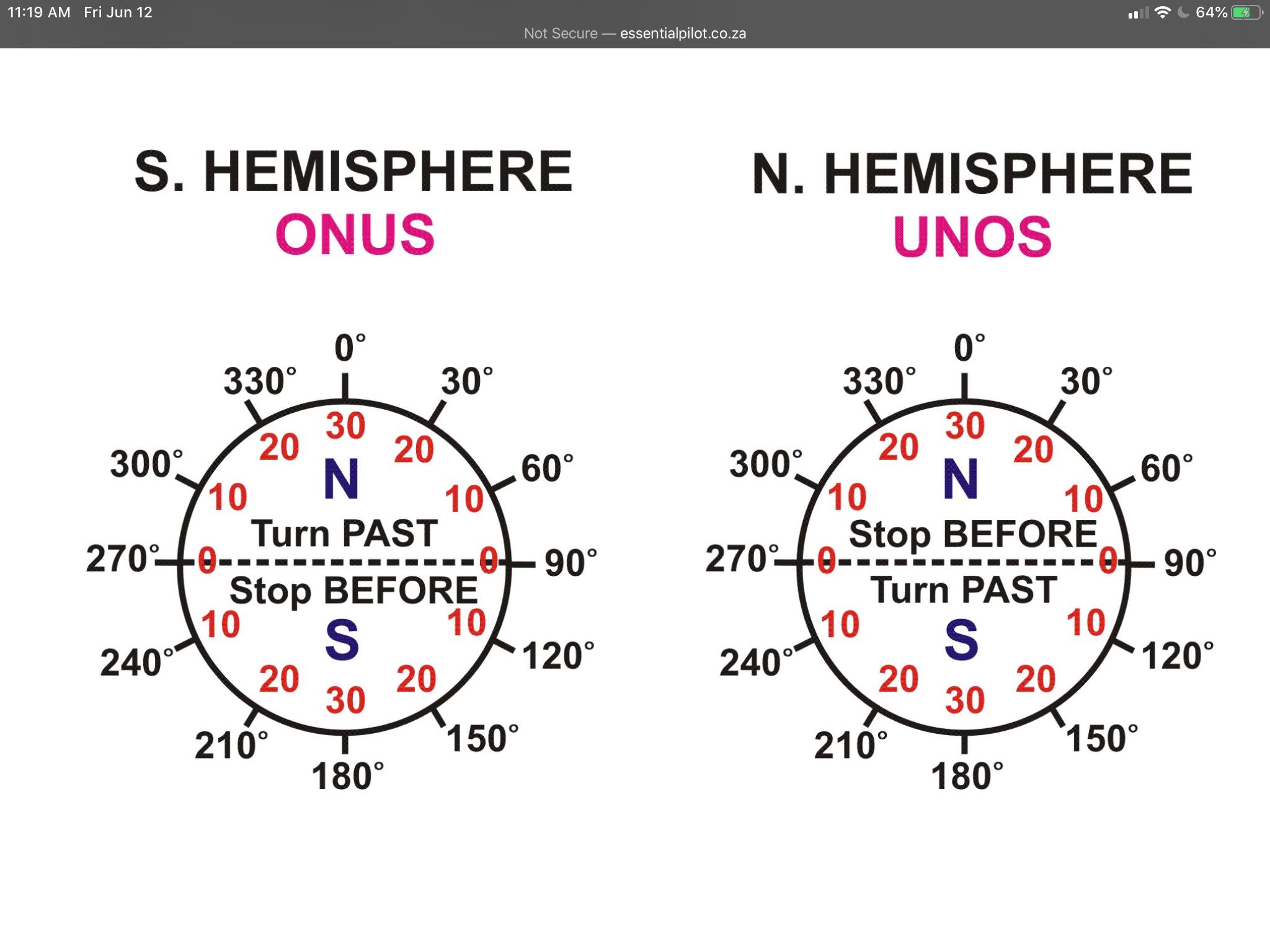 An aviation, liquid filled, “whiskey” compass works the same way as a handheld lensatic compass. It has a magnetized bar held in place on a low friction bearing, needle or pin point. In the case of the whiskey compass, there is also a card noting the bars direction attached to it that is read counterintuitively.

To better understand this, remember, with a whiskey compass (as opposed to a dry, vertical card, compass) you are reading the directional card from the opposite side of the actual direction that you are facing. You read the North direction from the end of the side facing South, and the East direction from the end of the side facing West. Picture it like the lid of a bottle or can. If you are looking at it from above, you can mark “N” at the edge of the top closest to North. If you are looking at it from the side, you can not see the top. So, you put an “N” on the side furthest away from North because that is the only side you are able to see when facing North. The same goes for the other directions. Therefore, East is physically to the left of North (clockwise when viewed from the top) on the direction card. The numbers of degrees is read in increasing increments from right to left. A good mnemonic memory aid for this is, “If you always run/turn away from the one you want, they will chase you.”

The magnetized bar will always try to align itself or stay aligned with the magnetic flux lines of the Earth. The Earth is a giant magnet. The flux lines Of the Earth exit the Earth at its magnetic South Pole and re-enter it at its magnetic North Pole all the way around the Earth. This places the flux lines comparatively horizontal (parallel to the ground) at roughly the equator, and vertical (perpendicular to the ground) at either Pole. The closer you get to either Pole (the higher the latitude), the more the compass bar will try to align itself vertically.

To counteract this phenomena, compasses are sometimes weighted to move the center of gravity of the bar & card arrangement closer to the side of the bar that would point upward, away from the Earth. In the Northern Hemisphere, the CG would favor the magnetic bar’s Southern pole. In the Southern Hemisphere, the CG would favor the magnetic bar’s Northern pole. This is done so that the bar or anything attached to it will not touch the inside of the compass housing. Any type of contact, friction, or drag could stop the compass from moving and realigning itself freely. When the compass is not weighted to move its CG, a compass that is suspended from its top will move its CG towards the opposite direction of the compass’s magnetic dip on its own.

The CG of the compass’s moving parts is very important in its movement. It creates inertia. The inertia of the offset CG will be apparent whenever there is a change in speed or a change in direction of movement. The CG will always want to remain at the same speed and travel in the same direction as it was. The CG will want to lag behind during acceleration, keep moving forward during deceleration, and keep going straight, swinging to the outside of a turn/curve. Picture it as the same phenomenon that will cause a glass marble in a Petri dish to roll around due to velocity change. Changing speed and/or direction will cause the compass to become misaligned until speed and direction are stabilized. When facing North in the Northern hemisphere, a right hand turn to the East will cause the compass to initially spin clockwise (relative motion to the aircraft) to the West backside indication. Here is a good article on turning errors that explains it much better than I can. Or, this one from AOPA.

In the case of a compass where an off-center CG is not affecting the compass, aircraft banking will cause magnetic dip to swing the directional card out of alignment. When facing North, banking to the right (East) will cause the compass to initially spin clockwise (relative motion to the aircraft) to the West backside indication. Due to this directional indication from the perspective of the backside of the directional card, magnetic dip while in a coordinated bank (where g-forces keep the weight of all objects inside the cockpit acting perpendicular to the floor) would cause the compass to initially indicate a turn in the opposite direction of the actual physical turn of the aircraft if your direction is North in the Northern Hemisphere and South in the Southern Hemisphere. This means that the compass would initially spin clockwise in the above North to East turn. The compass would then lag the actual turn until the bank is brought back to level, or your aircraft reaches an East or West heading. This article, as well as this one here both explain the above phenomenon better.

Not the answer you're looking for? Browse other questions tagged magnetic-compass or ask your own question.