Aircraft piston engines generally require priming, but automobile engines don't seem to need it. Why doesn't cranking the engine with the starter pull in fuel mixture that would ignite without help of the priming?

Modern cars typically have an electric fuel pump in the tank which is often started by opening the drivers side door, by the time your butt is in the seat the fuel system is pressurized. When the ignition system is activated the ECU (engine computer) looks at engine coolant temperature and outside air temperature and directs the electronic fuel injectors to meter the exact amount of fuel which is correct for the conditions, directly into the inlet valves. A cold engine needs a much higher ratio of fuel to air when starting (2-3 times when hot), which reduces as it heats. When it starts running the ECU also takes into account the mass of the air flow and oxygen content of the exhaust to maintain the ideal fuel-air balance for the smooth and efficient running of the engine.

This technology does exist for airplane engines, it's just expensive to fit so very few airplanes have it. Most light airplanes have very simple, completely manual systems. You shut down the engine by cutting off the fuel supply (closing the mixture), this ensures that the engine is completely dry of fuel so that if the prop is spun there's nothing in the cylinders which could go foom and spin the prop, potentially maiming someone.

Piston engines create a lot of suction as they operate, and rely heavily on vacuum suction to operate. The low pressure in the carburetor atomizes fuel, which then gets pulled into the cylinder, explodes which in turn pulls more fuel and air in. However, because the mixture was cut off the engine and carb are all dry (any fuel left in the carb bowl will evaporate over time), which produces little suction. No suction, no atomization of fuel, no foom. The primer pumps a very rich atomized mist of fuel into the intake for each cylinder, giving the engine something to foom, creating suction to pull fuel through the carb and sustain the engine. This is why you feel resistance when using the primer, you are forcing it through a bunch of atomizing nozzles. This is why you need to start right after priming, if you wait too long you lose atomization.

Note that many airplane piston engine carbs have accelerator pumps which jet raw fuel into the carb on quick throttle advances, this is to prevent a lean cut-off. Some people think it's the same as using the primer, but it isn't at all. Because there's no suction when you pump the throttle forward all you are doing is jetting liquid fuel into the carb, there's no vacuum to atomize it, so all you are doing is filling cylinders with raw fuel and they won't go bang. A single jet is good because having fuel in the carb bowl gives something to atomize once it catches, but too much will just flood the engine.

A hot start is very different from a cold start, the engine doesn't need as rich a mixture and the carb bowl still has fuel in it, so when you crank it you don't need to prime in most cases.

Fuel enrichment is needed because the cold temperature does not allow the fuel to properly atomize/vaporize in the air-fuel mixture and may actually condense back into raw fuel on the cold interior surfaces of the engine. Fuel enrichment ensures that will be a proper air fuel moisture reaching the cylinders for starting.

In a carbureted automotive engine, fuel enrichment is done with a manual or automatic choke.

Typical carbureted aircraft piston engines do not use a choke but instead use priming lines to supply addition fuel enrichment.

On a four cylinder aircraft engine there can be one, two, three, or four priming lines which spray atomized fuel directly into the engine cylinder very close to the intake valve. These priming lines are typically 1/8” copper tubing. It is easy to over prime the engine, and some pilots prefer not having a primer line for each cylinder. Having fewer priming lines allows one or two cylinders to fire even when the others are over primed.

Here is a photo showing 1/8” copper priming lines connected to the engine near the intake valves. 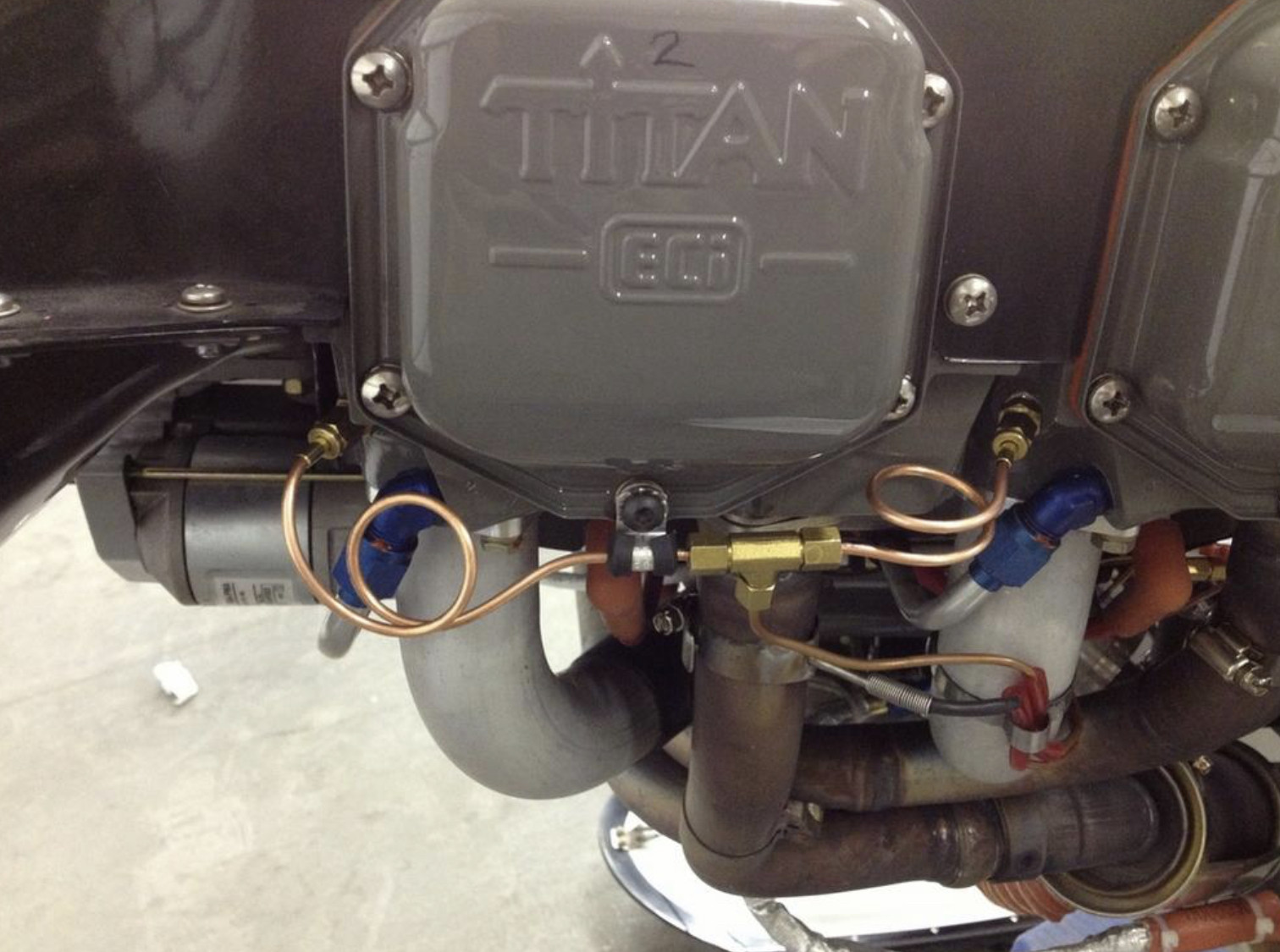 Why we need enrichment in the first place? The gasoline is liquid. The ignition requires a mixture of air and gasoline vapour.

In a running engine, having enough air inlet speed, gasoline becomes mist that evaporates when the compression happens in the cylinder. The engine being hot also helps a lot.

When cranking a cold engine, the air speed is not enough to create a mist, you get larger droplets that are quick to reach the inlet and combustion chamber walls and settle there. The compression is weaker, so is the heating because of the compression. No enough gasoline vapour - no ignition. The solution? Add more gasoline to the wannabe mixture that refuses to mix.

Carburetted car engines (~30 years ago) had the choke valve that reduced the pressure in the carburettor, alowing more gasoline to be drawn into the air stream. The choke valve is a bit of reliability concern - it has to be able to almost completely close the air inlet, or it won't work. I think that's why it is generally not used in motorcycles and probably in aircraft as well. A choke valve not returning completely was a common failure mode and one won't notice until the full power is needed.

One still needs some enrichment in order to start the engine. In the aircraft, one wants a method that has rather low probability of killing the engine in mid-air. So we have priming.

And yes, car engines get priming, too. In modern injection-fed computer-controlled engines, an automatic single injection pulse before starting does the trick. Depending on the conditions, the ECU may use priming, starting enrichment (longer injection times when cranking), both, or nothing.

And I am sure I did (as well as almost any advanced driver) manual priming (remove the air filter and pour some gas directly into the air inlet of the carb) on many cars that refused to start in a cold weather a decade or two ago.

Not the answer you're looking for? Browse other questions tagged piston-engine engine-starting or ask your own question.

10
What are the consequences of pumping the throttle in an carburetor piston engine airplane during start?
1
How does engine primer work?