Why does pitching moment coefficient decrease with an increase in the angle of attack? 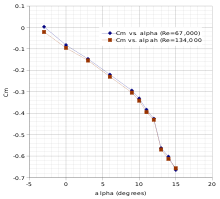 There are several, equivalent explanations:

The increasing slope of the moment curve at 12° angle of attack indicates stall onset on the inner wing. Here, the flow starts to separate on the rear upper wing root which reduces local circulation and, consequently, the downwash angle at the tail so the lift increase on the tail becomes disproportionally large. This is typical for a straight wing with a moderately high aspect ratio.

It does grow, but in the negative direction. This is because a nose-up pitching moment is defined as positive and what we see here is an increasing nose-down pitching moment. The center of pressure of the wing-tail combination is shifting backwards with increasing angle of attack and the pilot would need to trim a negative elevator deflection to bring it back to the center of gravity.

No, it's not. As the constant Reynolds number indicates, this has been measured at constant speed and it does not matter if it is a coefficient or the "real" moment because both only differ by a constant factor.

Not the answer you're looking for? Browse other questions tagged aircraft-design aerodynamics angle-of-attack pitch or ask your own question.

25
How does an aircraft tailplane work?
6
Should the pitching moment be up or down?

0
How to find trim condition of a sectional airfoil without knowing the angle of attack?
0
Wing pitching moment decomposition into two terms
0
Pitching moment as a pure moment and its measurement with a homemade force balance
0
Why do we need a negative derivative of the pitching moment? restoring moment should be enough?
1
What happens to the high pressure below an airfoil when the angle of attack increases?
3
What are the differences between symmetrical and cambered airfoils?
3
In helicopter's forward motion, how is the forward pitching moment taken care off?
5
Why does lift decrease and drag increase when approaching the stall condition?
5
Why does static directional stability decrease with altitude?