Why are these steps performed on the A330 emergency electrical checklist?

For an Airbus A330 in emergency electrical configuration with both generators and APU FAIL (both engines working), why does the checklist ask you to select RAT MAN ON before slat extension and then LAND REC ON?

If we look at the Airbus A330 manual we will see that the RAT (Ram air turbine) can only power the GREEN hydraulic system and when the EDP (Engine driven pump) of the green system is available, the emergency generator is run by the EDP and not the RAT.

The A330 has two levels of emergency electrical configurations. They are:

The level one emergency configuration is always better because it provides the aircraft with more power.

When you are coming into land, while the aircraft is in level two emergency electrical configuration (RAT only), once the slats are extended, the emergency generator is automatically disconnected, and the aircraft is purely powered by the batteries. The reason for this is to allocate RAT only for the operation of the hydraulic systems so that the flight control power is prioritized. When you turn on the land recovery push button, the LAND RECOVERY AC BUS and the LAND RECOVERY DC BUS are automatically powered giving the aircraft the necessary electrical needs for the landing. This includes powering of the SFCC 1 (Slat flap control computer). But in the case of RAT powering the aircraft, only the slat channel is recovered. The landing has to be conducted flapless. 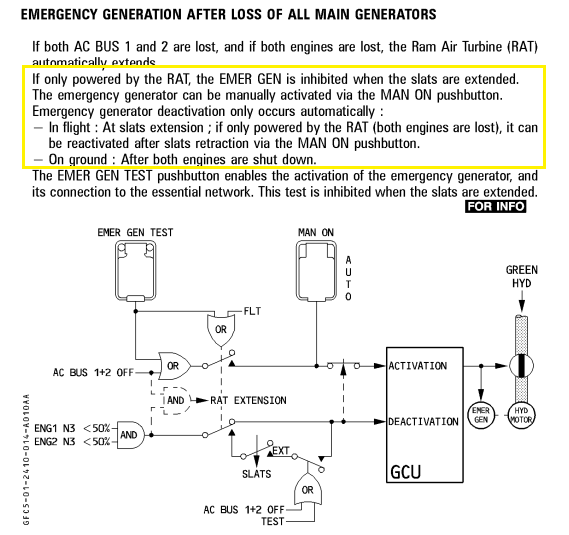 Not the answer you're looking for? Browse other questions tagged emergency-procedures electrical-system airbus-a330 or ask your own question.

12
Why does the wing root of the A330 have a pronounced twist?
2
Why do different sites list different lengths of the lower deck bulk cargo compartment for the A330-300?
2
Where exactly are the pitot tubes positioned on the A330/340?
2
What are these small propellers in the A330 MRTT's wings?
38
Why can't an Airbus A330 dump fuel in an emergency?
8
Why does the A330 sit nose-down on the ground?
3
Why do the DC-9’s three-phase electrical systems use separate, unconnected breakers for each phase?
0
Why does an ADIRU 1 failure disable all functions of the A330/340’s GPWS - even those not requiring ADIRU data?
4
Why is the alternator connected only to one electrical bus in the C152?