Since Ben Gurion International Airport is closed, flights are being directed to Ovda, with a 3000 meter / 9,843 foot runway. Can large passenger jets, such as the Boeing 747, land at such an airport?

I understand that a 747 at MTW needs about 10000 feet to land safely, but it can be done in a pinch at 6000-7000 feet. Would a commercial airliner fly flights to a temporary airport such as Ovda considering the shorter runway (i.e. not emergency conditions)?

Also, if I may ask, in the linked thread a 747 pilot refers to the 747 as "a gigantic replica of the North American F-86". To what might he have been referring?

So, given Terry's remarks, GdD pointing out that the density altitude for Ovda is around 4300', and the current B744 Airport Planning Document, we can use the unadjusted (there's also a temperature adjusted version, but you don't need that when you have a density altitude in hand) T/O distance chart for the appropriate engine type (I'm going to use the CF6 version for example's sake) to compute how heavy a 747 out of Ovda can be. (The chart you need is on page 72 on the PDF, by the way.)

As per PDF page 15 of that same document, the typical operating empty weight of a B744 is about 394,000 pounds. Adding the 120,000 pounds of passengers Terry quoted onto this leaves you with 236,000 lbs of fuel minimum, which is more than enough to get to anywhere in Europe with fuel to spare. If you want figures, you can use the payload/range charts on PDF page 55 to get a max range of 4200 miles, which as per the great-circle mapper is enough to get you to anywhere in Europe or Africa, as well as the Indian subcontinent and much of SE Asia and China.

As to the landing half of it, the landing distance charts on PDF pages 94 and 95 can be used, assuming a wet runway, a 4300' density altitude for Ovda, the passenger configuration MLW of 630,000lbs, and the ability to use Flaps 30 (Flaps 25 yields a longer landing distance) we get a runway length of around 8700'; this'd be somewhat tight (you'd want to use max autobrakes and your reversers, and make sure you came over the fence at Vref with a firm touchdown to avoid floating in ground effect), but passenger flights don't land at MLW very often, so it'd be a workable operation. 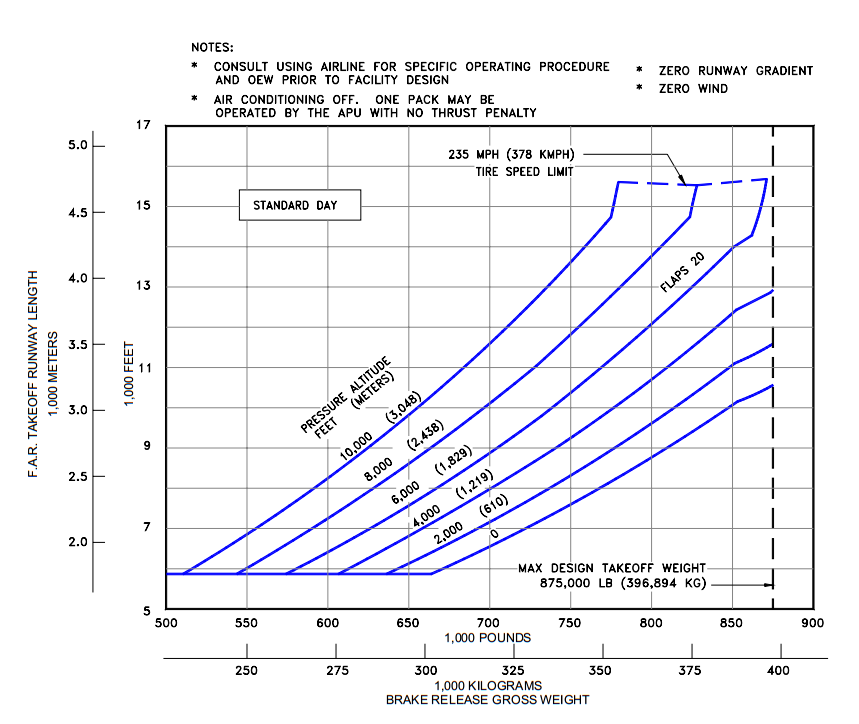 I think there's a landing equivalent if you need to know how much, ... erm ... cargo, to jettison.

Not the answer you're looking for? Browse other questions tagged landing takeoff boeing-747 or ask your own question.

2
What criteria make an airport suitable for a technical stop for a large airliner?