What is Neil Armstrong teaching in this image?

It seems to me that in this image Neil Armstrong is teaching something related with aerodynamics forces (lift, drag...), but I don't know exactly what is that "Triangle" that He drew (It doesn't seem to be an aircraft). 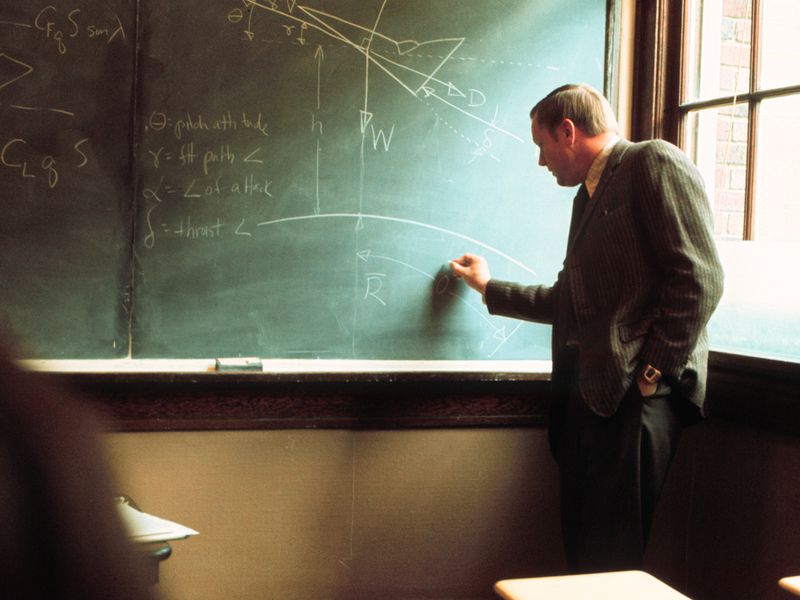 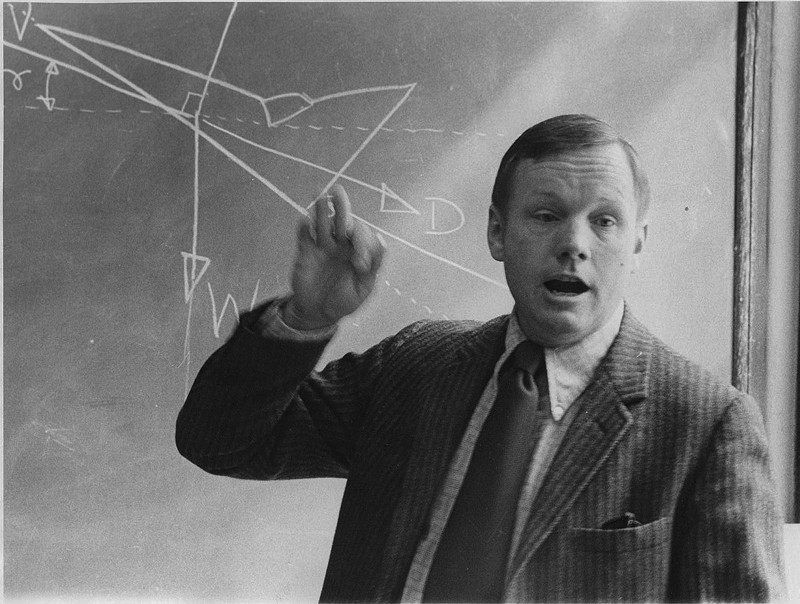 1) The triangle shape represents an aircraft-- imagine something like a supersonic version of a Gee Bee racer. The thing at the leading edge of the vertical fin is the canopy.

2) Here is a sketch that offers an educated guess about parts of the diagram that are either cropped, or hidden behind Neil Armstrong, in the original photos. Also, for added clarity, labels have been added to the dashed lines representing the horizon, and the aircraft's longitudinal axis. Note that for the diagram to make sense, the wings must be attached with zero incidence relative to the longitudinal axis of the vehicle, or the vehicle may be a flat-bottomed wingless lifting body. Only the green vectors represent actual forces. "L" is the lift vector, "D" is the drag vector, "W" is the weight vector, and "T" is the thrust vector. Note that "D" is parallel to the flight path, "L" is perpendicular to the flight path, and "W" is perpendicular to the horizon. "T" is drawn in this sketch as nearly, but not quite, parallel to the aircraft's longitudinal axis-- in the original, the direction of the "T" vector is about midway between the direction of the aircraft's longitudinal axis and the direction of the flight path. No attempt has been made in this quick sketch to make the force vectors add to zero. We can't see enough of the original to guess whether the force vectors as drawn there would add up to approximately zero or not.

3) The vector labeled "flight path" in this sketch was labeled "V" (for "velocity") in the original. It represents the aircraft's instantaneous direction (and speed) of travel through the airmass.

5) Another detail that ended up different from the original in this quick sketch is the order of the angles illustrated on the left-hand side of the diagram. In the original, running from right to left, the order is gamma, alpha (this letter has been rotated about 45 degrees clockwise so it looks almost like an upside-down gamma), theta, while the order in the attached sketch is theta, gamma, alpha. This has no effect on the meaning of the diagram-- the same greek letters are still associated with the same illustrated angles. A confusing point about the upper photo is that it is cropped in such a way that at first glance the angle labeled "theta" appears to duplicate the angle labeled "gamma", but of course this is not actually the case.

It appears that he is teaching about the 4 fundamental forces of flight as well as the angle of attack, I also see notes about the thrust angle in the upper image

The triangle is just a crude airplane (I would think). Armstrong had time in a lot of airframes over the years including space craft, this just may be his generic scribble of a "flying machine", it could also just be an X-15 in the first image it appears there is some sketch of the surface of the planet.

16
What is the significance of the speed of sound to aerodynamics and aircraft design?
7
Is this explanation of adverse yaw correct?
9
How are wind tunnels used with scale models?
4
How can an airplane keep going forward if it has no thrust?
9
If no low-speed compromises were made, what would an ideal Mach-3 wing look like?
6
What aerodynamic characteristics arise from trailing edge sweep angle?
3
Why did this delta wing generate a lower Cl at a higher wind tunnel velocity?
1
Is "excess thrust" possible in a steady state vector diagram?
2
Why can't you have sail-powered airplanes?
2
General Rule for Calculating Center of Gravity of any Aircraft Configuration