What is implied about altitude and the VDP by this Visual Flight Segment arrow in the profile view example in the Aeronautical Chart User's Guide?

This is out of the Aeronautical Chart User's Guide.

instrument-procedures procedure-design
share | improve this question | |
edited May 28 at 14:30
Ryan Mortensen
asked May 28 at 13:52

This is extracted from the RNAV (GPS) RWY 23 of WESTERN NEBRASKA RGNL/WILLIAM B HEILIG FIELD (BFF) in Scottsbluff, Nebraska. 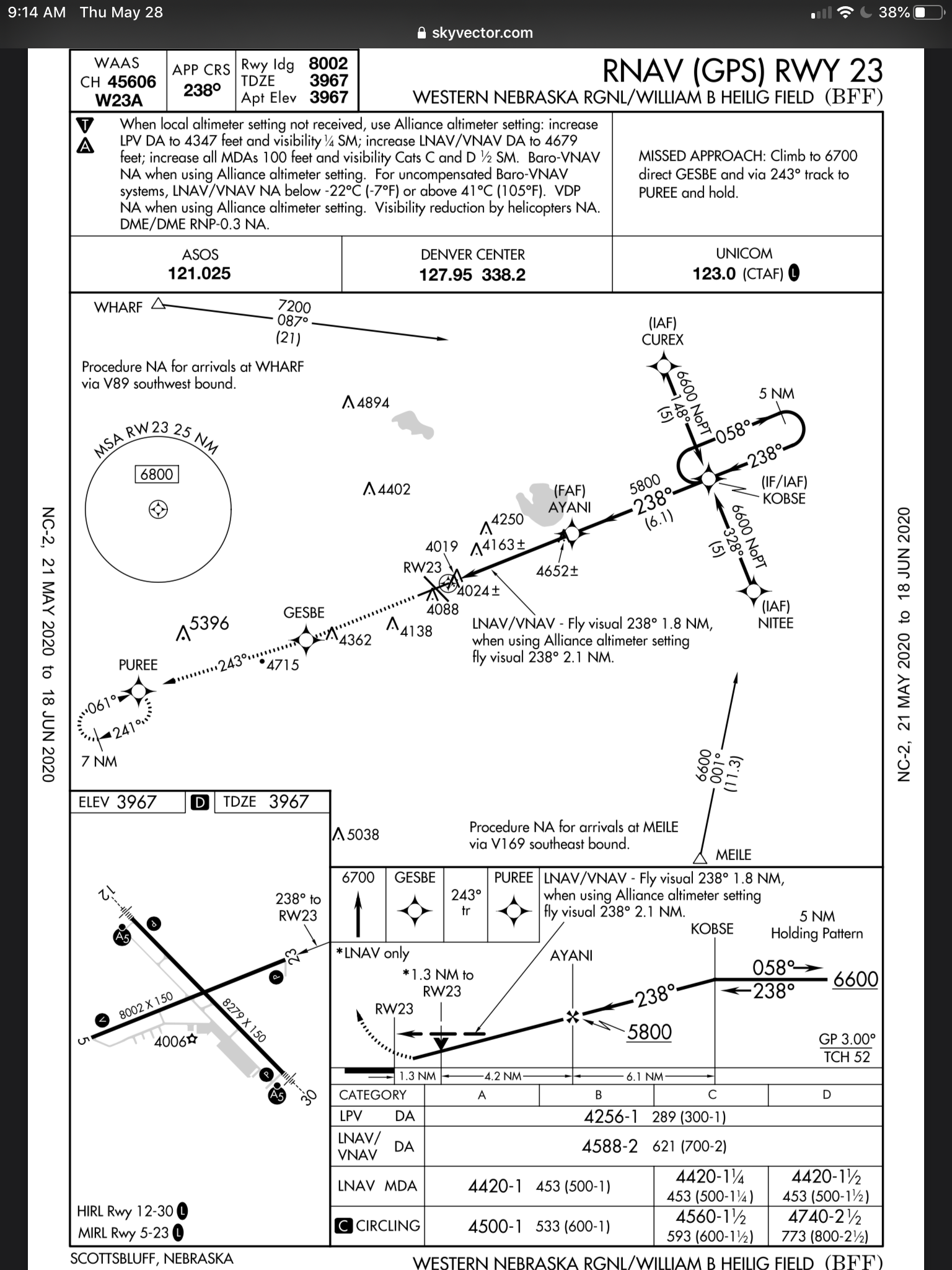 A VDP (Visual Descent Point) is only used in conjunction with an MDA (Minimum Descent Altitude). Do not mistake this for a DA (Decision Altitude). If visual contact with the runway environment is not made once a pilot reaches MDA, the pilot must continue at the same altitude on the approach course until reaching the MAP (Missed Approach Point). The VDP is the point along the course where a normal descent has been calculated as possible using normal procedures and maneuvers. It is a recommended point where the pilot should make the decision to go missed once reaching the MAP. That means that even though the pilot has decided to go missed, they will continue to fly past the VDP, straight and level, until the MAP. The key word here is “recommended”.

At a DA, if the pilot has not made visual contact with the ground, the pilot is required to decide to go missed. In most cases, that means the pilot would initiate the missed approach procedure immediately before reaching the DA. Since there are two DAs for the LNAV/VNAV, depending on if the local altimeter setting is available, there are two distances to the MAP. This is conditional upon the pilot maintaining glideslope all the way from the FAF (Final Approach Fix).

In this case, upon making visual contact with the ground, the pilot can choose to make a Visual Approach. There is no altitude requirement unless specifically charted. Cloud clearance and visual obstacle clearance must be maintained.

According to the users guide, it appears a pilot on the approach can fly visually past the point of decision if they have broken free from the clouds.

Visual Flight Path Instrument approach procedures, including Copter approach procedures, that terminate or have missed approaches prior to the airport, and are authorized to proceed visual, shall depict the visual segment by the dashed line symbol from the missed approach point to the airport. The note “Fly visual” (“Proceed visually” on Copter procedures) along with the bearing and distance shall be shown leadered to the visual flight path. RNAV charts sometimes have visual flight for LNAV/VNAV minima which do not start at the missed approach point. An additional note indicating “LNAV/VNAV” will be placed above the note.

Note: The FAA Administrator retains the authority to approve instrument approach procedures where the pilot may not necessarily have one of the visual references specified in 14 CFR §91.175 and related rules. It is not a function of procedure design to ensure compliance with §91.175. The annotation “Fly Visual to Airport” provides relief from §91.175 requirements that the pilot have distinctly visible and identifiable visual references prior to descent below MDA/DA.

My reasoning for saying the VDP is recommended and not required is that the VDP is found in the AIM.

AIM 5-4-5
h. The Visual Descent Point (VDP), identified by the symbol (V), is a defined point on the final approach course of a nonprecision straight-in approach procedure from which a stabilized visual descent from the MDA to the runway touchdown point may be commenced. The pilot should not descend below the MDA prior to reaching the VDP. The VDP will be identified by DME or RNAV along-track distance to the MAP. The VDP distance is based on the lowest MDA published on the IAP and harmonized with the angle of the visual glide slope indicator (VGSI) (if installed) or the procedure VDA (if no VGSI is installed). A VDP may not be published under certain circumstances which may result in a destabilized descent between the MDA and the runway touchdown point. Such circumstances include an obstacle penetrating the visual surface between the MDA and runway threshold, lack of distance measuring capability, or the procedure design prevents a VDP to be identified.

Not the answer you're looking for? Browse other questions tagged instrument-procedures procedure-design or ask your own question.

10
What is the final approach fix altitude for this localizer approach?
4
What’s the grey altitude depicted in the profile view on Jeppesen charts?