Helicopter Basics: How does lead-lag of blades actually help in compensating for increase/decrease in speed due to flapping?

I understand the following -

My question is - what does the "compensation means"? Even after rotating the blade front by 1-2 degrees (leading), the speed of blade will remain the same after it is reached its maximum lead angle. So, what happens after that?

Is it the case that lead/lag helps in absorbing the load/vibrations by allowing some degree of freedom for blade to move by few angles?

Blade flapping is simply the action of the tilting of the rotor disc; the blade's tip is following a particular path attached to a hub that is rigidly fixed on its vertical axis. The blade flaps up and down because its incidence/pitch is being continuously varied (or not if the stick is centered) by the swash plate. The limits of the rotor disc's tilt range is, beyond the swash plate limits, ultimately the blade flapping travel limits. Articulating rotors can handle this, but on a two blade teetering rotor, achieving those limits is called "Mast Bumping" and is a fatal condition.

For lead lag, the issue is you need to allow for that motion on an articulating rotor helicopter because Coriolis force makes a blade want to speed up as it flaps up relative to the other blades (actually, moving off perpendicular to the mast's axis). When it flaps up, its center of mass moves closer to the hub than a blade on the other side that is closer to perpendicular to the mast, which makes it want to speed up, like a figure skater pulling arms in while spinning. The lead/lag hinge provides the necessary compliance to accommodate the speeding up and slowing down tendency of the blade as its center of mass moves closer and farther from the mast as it rotates while moving up and down, so it doesn't force the rotor hub to absorb the forces. The lead/lag damper is there to resist sudden movements of this lead/lag action that can be caused by sharp ground contact, which can lead to ground resonance.

On a teetering rotor system, you don't need lead lag hinges because you have the geometry of the teetering hinge, which is the blade flapping hinge for both blades on a single flapping axis. The up flapping blade moves away from the hub because the hinge is above the blade axis (called an under slung hub) and this keeps the CG from moving closer to the hub significantly, eliminating most of the Coriolis forces, or reducing them to a level can be absorbed by the rotor head and blades. 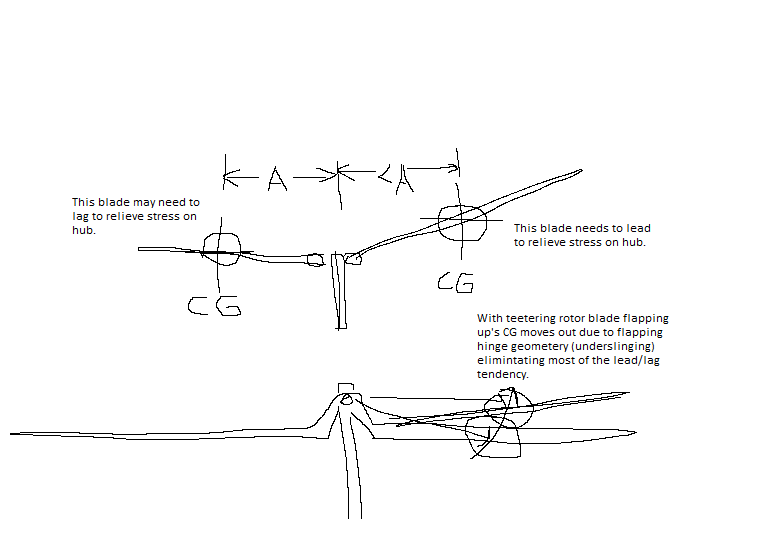 Not the answer you're looking for? Browse other questions tagged aerodynamics helicopter rotorcraft flight-dynamics blade or ask your own question.

11
How are helicopter rotor blades balanced?
1
How does wind speed affect helicopter rotor speed?
3
how does recovering a plane from stall lead to exceeding the critical mach speed?
5
How does a helicopter hover?
9
Relationship between flapping and lagging frequency
4
Why does the rotor thrust decrease at smaller tip clearance for shrouded rotor?
5
How does a Delta-3 hinge on a helicopter tail rotor work?
9
How does increasing the RPM result in a higher AOA for the blades?
1
Helicopter Flight: What is the reason for decrease in Induced drag with increase in speed?