How can the fuel decrease evenly from both wing tanks when an A320 is running on APU only?

I stumbled over this sentence in a training material about fuel leak:

Regarding the APU feedline part, what I don't understand is if the APU is feeding from the left tank always regardless if it's by the fuel pumps or it's own pump (in case the fuel pumps are off) how can the fuel decrease evenly from both wing tanks?

If you look at the fuel leak checklist you will see that you will come to this point only after you have confirmed that there are no leaks from the inner wing tanks and engine fuel feed lines.

According to the checklist if there are no visual indications of fuel leaking near the engines, you are to ensure the fuel cross feed is maintained closed. Then you turn off the center tank pumps. When the center pumps are off the engines will be only supplied by the inner tanks. Then you are to monitor the fuel in the tanks for a total of 30 minutes. If one tanks depletes faster than the other tank by 300 kg you can assume an engine leak. So, you shut off the associated engine. If this stops the leak, engine leak is confirmed. If it continues to leak you can assume an inner wing tank leak.

Now, the checklist says, if both the inner tanks deplete at a similar rate, you can suspect a center tank leak (remember the pumps are off) or a leak from the APU feed line. I have highlighted the word similar, because the checklist says to check for similar readings, not same or symmetrical readings. Yes, with the APU on, the left wing inner tank will deplete faster than the right tank, but it should not bring a massive difference to the figures. The A320 APU burns about 130 kg of fuel per hour. The checklist says to monitor the fuel for 30 minutes. This means, at the APU fuek line a leak would happen at a lower rate. That is why it says to look for similar rates, because an APU fuel line leak is quite insignificant. But you cannot still assume no leaks at the APU fuel line. The fuel leak checklist is a very conservative checklist. It is all about trying to close off any possible areas where a leak might be possible.

The checklist also says that if you have a fuel smell in the cabin, to turn off the APU to prevent additional fuel loss. It uses the word additional because the rate of leak at APU fuel is insignificantly low. 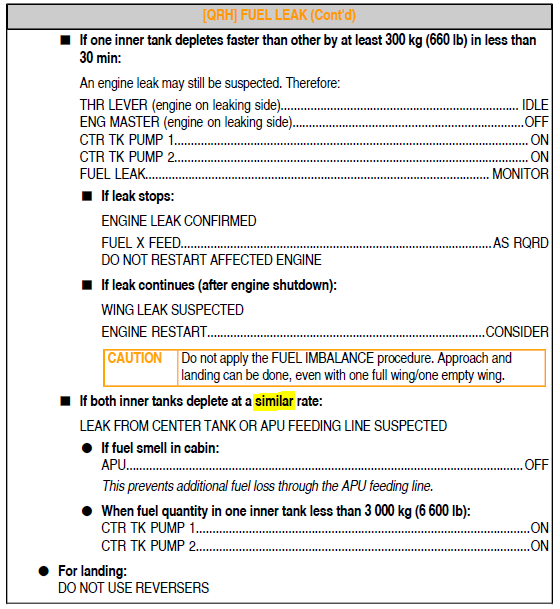 I have had a situation like this while on ground during a long transit halt. As mentioned in your question how can fuel decrease evenly from both tanks with all the fuel pumps off.

The answer is to open the cross feed valve. As with the fuel pumps off the APU has its own fuel pump which provides feed only from the left hand side fuel tank. Keeping the cross feed open will negate this as fuel can now be fed to the APU feed line from the right tank also. Refer the below diagram 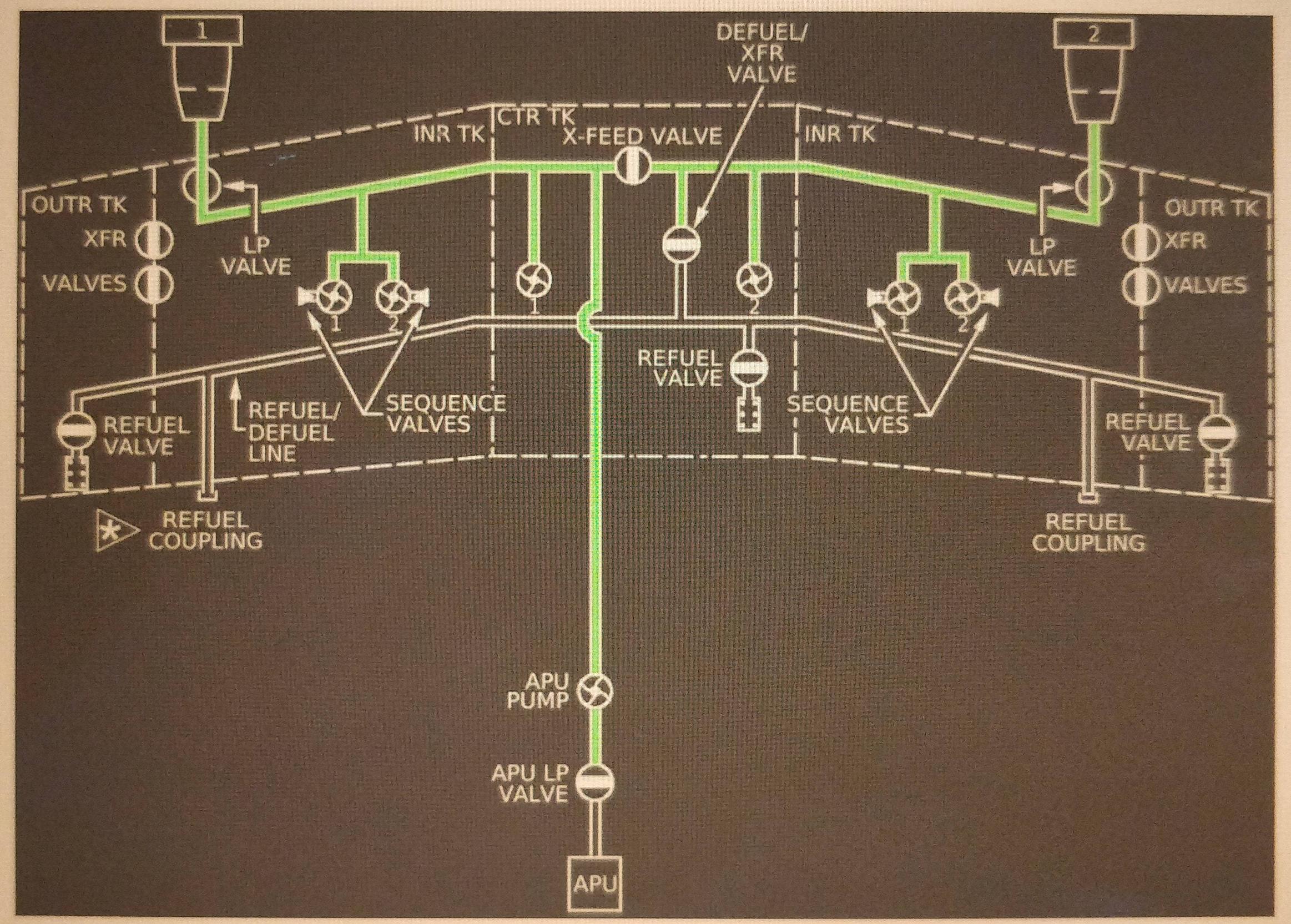 On the refuel control panel we have to put the mode selector to defuel/xfr position to open the defuel/xfr valve this in turn connects it to the refuel gallery. Post this the recieving sides refuel valve has to be opened and the non recieving sides refuel valve has to be closed. Once this is finished we switch on the fuel pumps of the tank from which we want to transfer fuel and keep the other sides fuel pumps off. The same diagram above can be used for understanding.

However for a more detailed diagram refer to the attached diagram below. 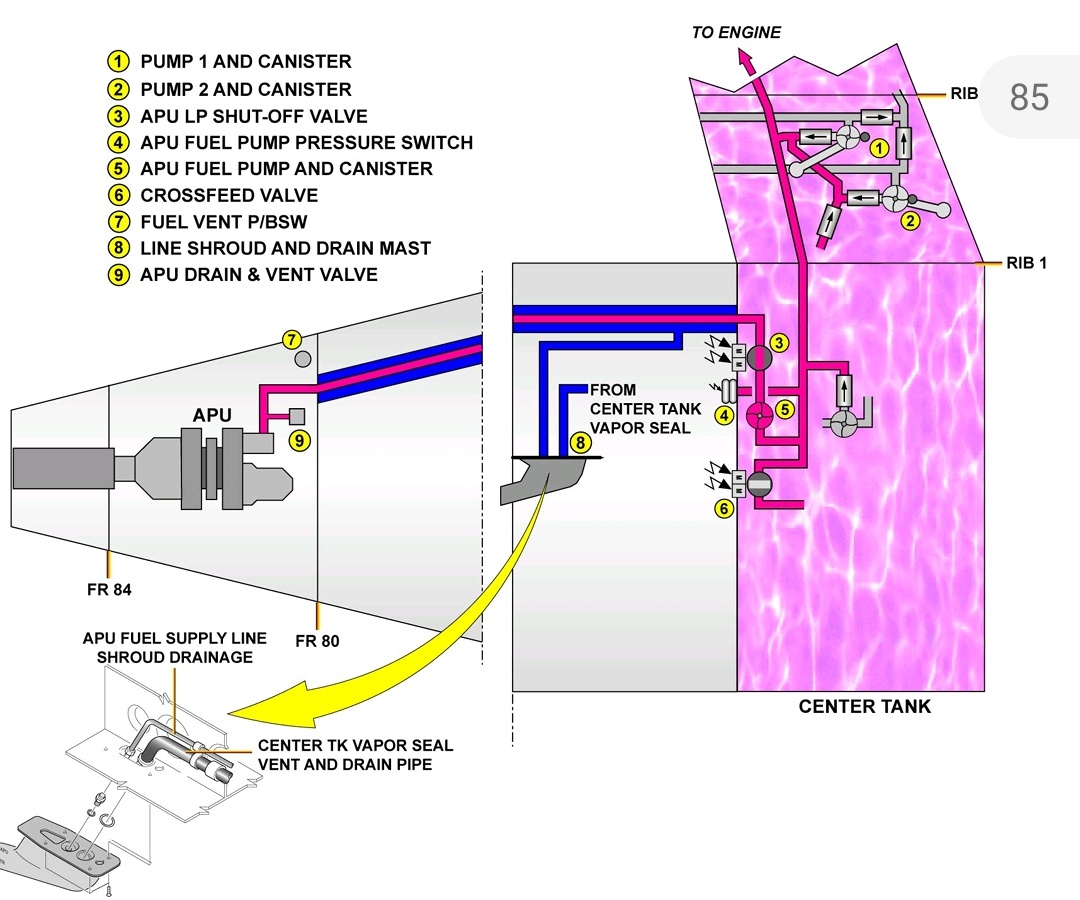 Not the answer you're looking for? Browse other questions tagged aircraft-systems airbus-a320 fuel-systems or ask your own question.

16
What is the appropriate fuel tank selection to land a 172?
2
How does switching off pumps and putting on MAN switch resolve low pressure?
4
Where is the APU fuel pump on the A320?
4
In normal condition, is the Airbus A320 APU fuel supplied by the main engine boost pump only?
10
Why would the outer tanks fuel on the A320 be colder than the inner tanks?
0
Why doesn't the Convair 580 have check valves to prevent inadvertent fuel transfer?
17
Why aren't "fuel polishing" systems removing water & ice from fuel in aircraft, like in cruising yachts?
2
Use of a solenoid valve over a selector valve
9
How common were (are?) hydraulically driven fuel pumps?