Would using a full span spoiler and a separate flap be a better design than a flaperon for a STOL ultralight?

Would using a full span spoiler and a separate flap be a better design than a flaperon for a STOL ultralight?

I understand many ultralights use 50% flaps and 50% ailerons. The problem with this, is that it greatly reduces your Clmax.

I understand Zenith uses a full length combination flap and aileron, called a flaperon. However I imagine using the 50% split aileron with full flap would still effect total lift. 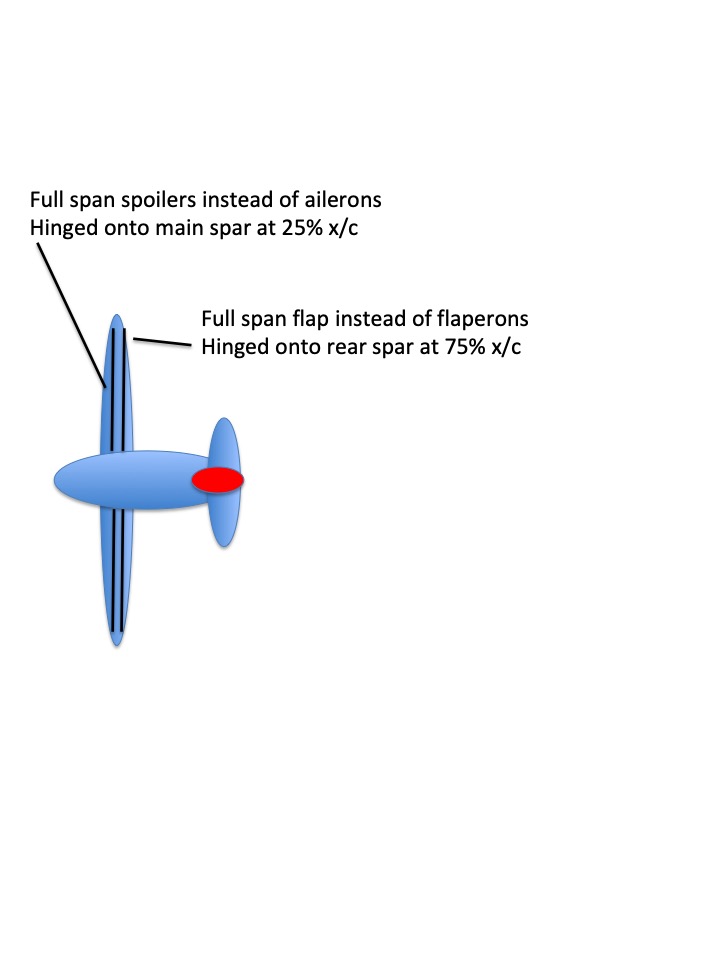 There is an interesting NACA report on use of spoilers for roll control here.

I think if you want to do that the spoiler should just be around the outer 1/3rd of span (the rolling moment generated inboard is low - barely worth extending the surface inboard. And the spoilers should be at the rear spar. For reasons I'm not entirely clear on, they work much better close to the trailing edge and the only time you see spoilers at the main spar is on gliders where they are being used only to increase sink rate.

A significant downside to roll spoilers you have to account for is a "dead zone" in the first, say, 10 degrees of extension due to it having to extend beyond the boundary layer to start to work, so you find the stick also has a dead zone a bit to each side of center. This may be why you don't see more use of roll spoilers on ultralights and airplanes that have airfoils that are fairly turbulent aft of the spar.

On the other hand, the report says, to my surprise, that roll authority is almost as good while in inverted flight (I guess in that case it acts like a split flap when the pressure distribution is flipped over and is able to move the wing while inverted in the same direction as while right side up - this is the first report I've found that directly addresses this).

I'll also point out that the use of roll spoilers and full span flaps is usually done on airplanes where you want to maximize the speed range like on the MU-2, where you have very large fowler flaps that increase the wing area by about 20% by being full span. In the end, for an ultralight that flies down to 25mph and cruises at 55 mph, all that trouble to develop full span flaps and roll spoilers might only get you a couple mph reduction at the bottom compared to a large flap and smallish aileron at the tip, with negligible benefit at the top.

9
How do the uninterrupted and interrupted flaps compare?
1
Is it possible to design a GA plane with a 5' -10' wing span?
4
Is lower wing loading safer?
0
What is the total EXTRA lift produced using an 80 deg flap and distributed propulsion?
0
If “all flying rudders” for LSA aircraft need up to 40% less area, what about “all flying elevators (stabilators)”?
2
Would plain and slotted flaps increase lift substantially in a distributed propulsion application?