What are the disadvantages of fitting underwing flaps to a Mirage III/5 fighter jets to lower landing speeds?

The Mirage III / 5 series of fighter aircraft are versatile aircraft, but has a high approach speed of 180 knots and a high landing speed, requiring long runways.

Underwing flaps, like those of the Gloster Javelin, would surely work, and the fact that they are close to the CG would not cause an acceptable pitching moment. The tailless swept wing Messerschmitt P.1111 also had flaps on its trailing edge.

Tested on a small free flight glider, I found that the flaps on a delta resulted in a noticeable increase in lift and decrease in turning radius, the elevons were not overwhelmed by the downward moment of the flaps. Using trailing edge flaps on a the same delta wing model resulted in an unacceptable downward pitch that could not be counteracted by the remaining set of elevons.

I would think the system would work, however my question is what sort of performance effects: increase in weight, for example, and possibly drag, would result.

Later models of Mirage incorporated canards and other devices to reduce landing speed did Dassault Aviation overlooked this option or did they evaluate it and decide that it would not be worth it?

I would have incorporated these in any delta wing fighter I designed, at least to offer it as an option to customers like the tailor made canards were to be offered.

Every airplane is a compromise of conflicting demands. While I am not intimately familiar with the Mirage family, I can easily see why flaps were never included.

In the early Fifties when work on deltas started at Dassault, the most important design parameter was top speed. High landing speeds were accepted, and given the design alternatives to a delta (think F-104), the landing speed could be considered low and another plus on the side of deltas.

When the first Mirage III were ordered, they had to serve in four different missions: As an advanced trainer (Mirage III B), an interceptor (Mirage III C), attack aircraft (Mirage III D and E) and for reconnaissance (Mirage III R). In order to allow for the widest variation in external loads, the lower wing should be free of flaps or other equipment which would restrict the attachment of tanks, armament or reconnaissance pods. Mounting any flaps at the straight trailing edge would require an opposite deflection of the elevons, negating any lift gain.

Flaps on naturally stable tailless aircraft are only helping if they are attached at a point ahead of the pitch trim flaps. This is possible with swept wings (see the Horten IX glider with its small flaps below) or with split flaps at mid-chord, like on the Gloster Javelin. With a straight trailing edge, no lift increase with a naturally stable configuration will be possible since the additional pitch moment of those flaps must be compensated at the same lengthwise location by the pitch control surfaces. What is gained with the flaps must be destroyed for pitch trim. 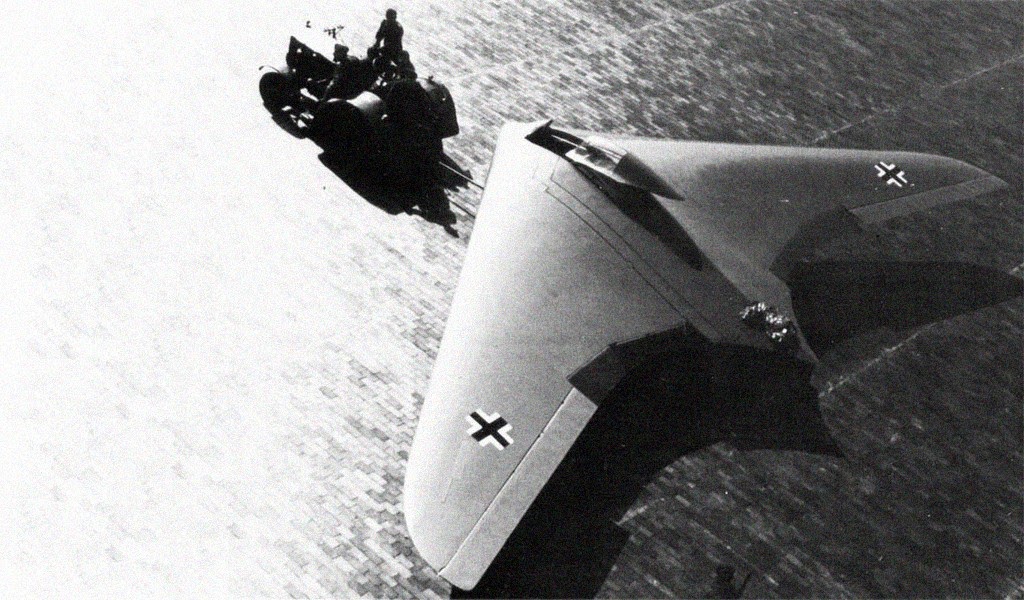 Since the Mirage line was never considered for use with aircraft carriers, its landing speed was accepted as part of the overall package. The Gloster Javelin was designed as a pure interceptor which put fewer demands on its lower wing. Also, the Javelin's tail helps to trim the aircraft in the landing configuration.

From the US translation of "Aerodynamique de la Nouvelle Generation d' Avions de Combat a Aile Delta", published in the AGARD Conference Proceedings No. 241:

Its [the Mirage III] aerodynamic formula, a delta wing swept back 60° at the leading edge, allowed Mach-2 flight with a single engine of 6 tonnes thrust, while its competitors were equipped with a 7-tonne J79. The trade-off to this supersonic performance was a large increase in the approach speed, 180 knots instead of 140 kt for the Mystere family. This constraint was accepted for the Mirage III, but later program specifications from the General Staff of the French Air Force required an approach speed below 150 kt.

So the Mirage III users had second thoughts, after all. The result of this lower approach speed requirement became the Mirage F-1.

Note that artificial stability allows to lower trailing edge flaps on a delta wing; the Mirage 2000 could be flown down to 100 kts airspeed.

"Tested on a small free flight glider" gets a +1, but here some book knowledge helps.

At lower Reynolds numbers, the classic airfoil shape looks good, but most lift comes from the bottom. This is why insects have flat wings and birds have delta tails and heavily undercambered wings.

Flaps work very well on straight winged aircraft at higher Reynolds numbers because they improve both bottom "pressure" lift and top "Bernoulli" lift by increasing camber, much more so by combining them with slats, and particularly at higher aspect ratios.

But flaps help a lot less with low aspect deltas, slats a bit more. Some lift enhancing devices were proposed for the next generation Concorde, but one need only build a longer runway (and strong tires) for the original to work fine.

For lift vs drag efficiency, top lift generated by airflow over a cambered surface is by far the best until Mach effects (approaching transsonic speeds) begin to cause an increase in drag. Then, it's back to the bottom again for less efficient lift production.

The advantage of deltas, early in the supersonic age, is they were very stable and used vortex flow over a swept leading edge, along with bottom "pressure" for lift. Rockets with low aspect delta fins were routinely breaking the "sound barrier" 10 years earlier than the straight winged Bell XS-1, and the thin winged lower aspect Spitfire came close (before losing its prop).

So, while deltas make very graceful paper airplanes, the much higher wing loading at full scale (weight/area ratio) makes them rather brick like at lower speeds. Especially for military aircraft, one would go with the longer runway, or, like the Swedish Viggen, use vortex enhancing canards to improve short field performance.

Another answer that gives yet another factor for why it probably wasn't done: it's not necessary for delta wings.

One of the limitations you have in exploring the flight envelope of delta wings is that you have no active control over a free-flight glider: you cannot alter the characteristics in flight. If you have experience with RC planes you will notice another characteristic of delta wings: flaring the wing dramatically increases both lift and drag.

In effect the entire delta wing is it's own flap. Unlike narrow chord wings (straight or swept) one of the interesting characteristic of delta wings is that they can maintain effectiveness of elevon control at very-very high angle of attack. In fact, way past what would normally be considered its stall point.

There have in fact been delta wing planes that use flaring as analog of deploying flaps: both the Concorde and the Tu-144 were designed with nose cones that drop so that pilots can see the runway on landing approach while the entire wing flares.

I suggest you perform another experiment with your free-flight glider. Instead of adding flaps increase the elevator action of your elevons and see how much more lift you get from it.

The Mirage however was not designed with a droppable nose but pilots still used the flaring maneuver to slow down on landing. Perhaps being a military jet meant to operate from fixed airbases the runway length required for landing was considered adequate.

Not the answer you're looking for? Browse other questions tagged aircraft-design aircraft-performance delta-wing or ask your own question.

1
How would a fighter be changed from having static stability to having relaxed stability?

12
What are the advantages and disadvantages of a delta wing compared to a swept wing?
11
What are the takeoff and landing speeds of a Learjet 45?
9
If no low-speed compromises were made, what would an ideal Mach-3 wing look like?
10
What are the advantages and disadvantages of autogyro aircraft?
2
Would the Concorde have been better off using a tailed delta wing?
0
What will be the performance penalties of increasing the wing area of a delta winged aircraft to obtain a lower approach speed?
3
Can thrust vectoring be used to enable the use of flaps on tailless delta-winged aircraft?
6
How does a delta wing deal with supersonic boundary separation?