Why is the thrust-specific fuel consumption much worse for high bypass turbofans at cruise?

I assume this is typical for a modern HBPR turbofan.

Of course, as altitude rises, the reduced air density means the fan has less airflow, causing less thrust to be created. But then again, the bypass ratio does not change, so the core airflow also decreases by the same amount as fan airflow. So fuel flow should be decreasing too! So why is the TSFC TWICE as bad for cruise as takeoff? Is it because of losses in the fan duct increasing rapidly with speed?

(By the way, I know the higher speed helps reduce the seat-mile consumption, but still.)

EDIT: Wait what the? RB211, another HBPR turbofan, has almost no difference between cruise and "sea level" https://en.wikipedia.org/wiki/Thrust-specific_fuel_consumption

Yes, that is typical for high bypass ratio (HBPR) turbofans.

Because the entry impulse goes up while the exit impulse stays roughly constant. Thrust is the difference between both, derived over time. The moving engine needs to slow down the airflow for combustion to take place, and then needs to accelerate the air by more than it has been slowed down to have positive thrust. Hence, SFC goes up in parallel with speed.

While the internal process inside the engine in flight is very similar to that at rest (only the pressure levels are increased by the ram effect of the moving engine and density drops with increasing altitude), thrust is reduced due to the smaller impulse difference in flight. Since a HBPR engine accelerates most of the air volume streaming through it by only a little, the average exit speed is relatively low compared to a jet engine with no bypass flow. This is similar (but less severe) to a propeller where thrust drops with the inverse of speed.

SFC gets even worse in supersonic flight. For a meaningful SFC comparison speed needs to be the same. 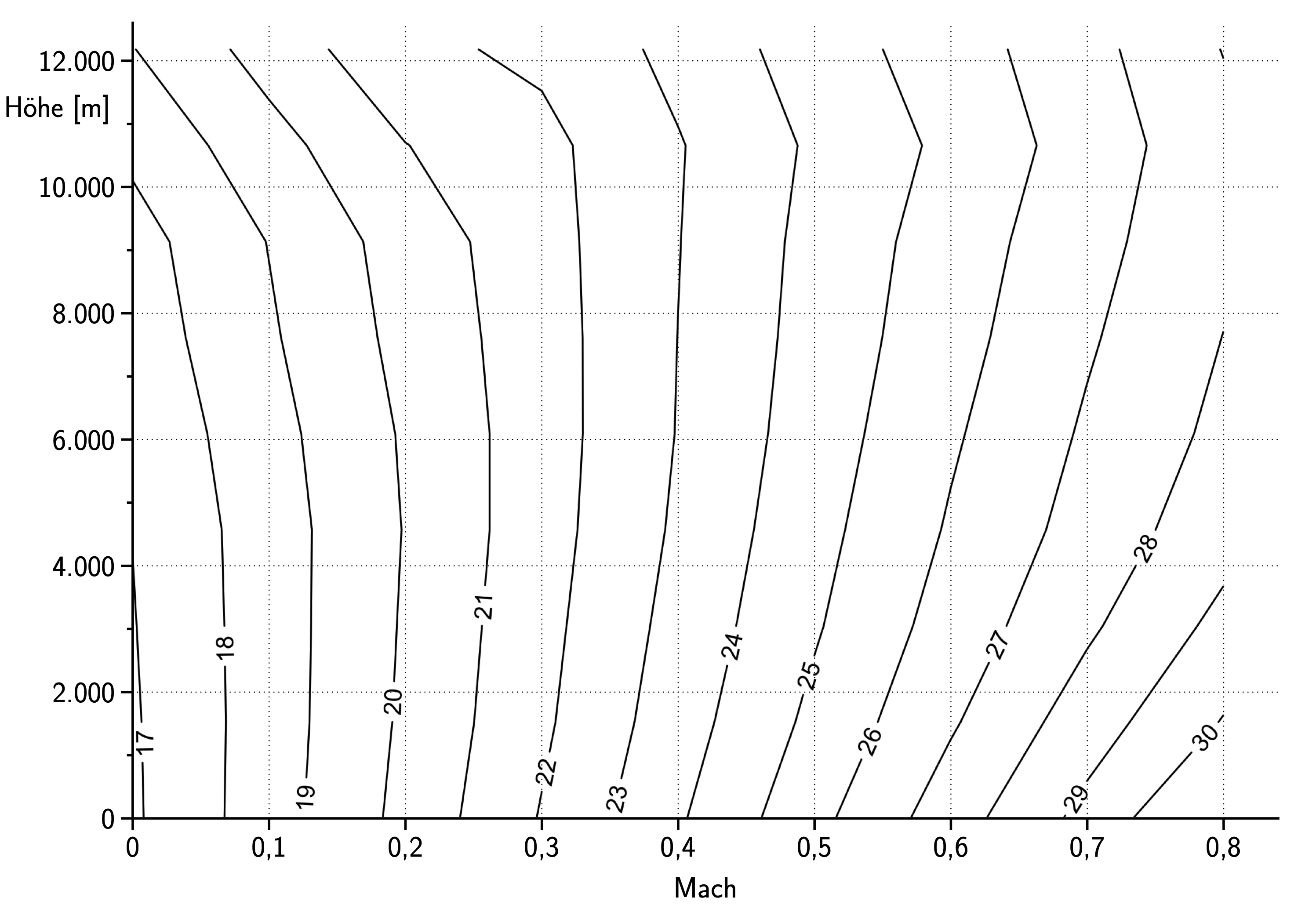 Thrust-specific fuel consumption in g/kN·s of a turbofan engine with bypass ratio 3. Y axis shows altitude in Meters. Isolines wer made with R contour function and should be more rounded in reality.

Not the answer you're looking for? Browse other questions tagged turbofan efficiency fuel-consumption cruise or ask your own question.

60
Why can't jet engines operate with supersonic air and how do they slow it down?
37
Why do gases in the combustion chamber only flow one direction to the gas turbine in a jet engine?
24
In what way are the Concorde's engines considered efficient?
27
Is there any equation to bind velocity, thrust and power?
12
What is a ramjet?
8
How is combustion flame maintained in the combustion chamber after igniters are switched off?
12
How (and why) does engine thrust change with airspeed?
9
Why is thrust available constant with speed for turbojet engines, when it varies with speed for turboprop engines?

4
How do aircraft engine manufacturers achieve a higher bypass ratio while still meeting the thrust requirements for a given aircraft?
17
Can high-bypass turbofans cruise at high altitude?
4
Does the P&W F100 turbofan engine of the F-16 really produce this much power?
6
Why did the Mercure use cascade-type reversers?
0
Turboprop vs Turbofan: How to compare Specific Fuel Consumption
2
What integration of aircraft propulsion would be more efficient at sea level high speed flight? A turbofan, unducted fan or a turbojet?
2
What mechanism did the turbine reversers of early high-bypass turbofans use?
16
Can the plane Celera 500L be eight times more fuel efficient than a jet of similar size and capacity?
1
Why are high-bypass turbofans faster than turboprops?