I understand washout is used to delay full stalls ( at least in unswept wings), but isn't pitch stability related to cg and centre of pressure? 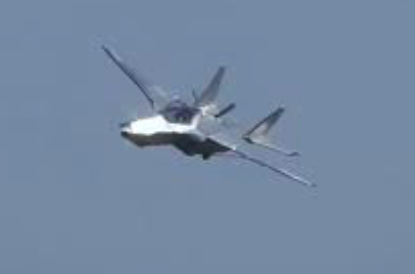 Since its earliest days during the pioneer era, washout on a swept wing has been accurately described as "putting the tail at the end of the wing." It works in exactly the same way as a tail stabilizer.

On a straight, unswept wing washout can delay the stall a little, but stalling is a complex subject and best treated separately.

It works the same way as a tail, the wingtips are further aft, so the pitch torque around the center of gravity is greater. $Torque$ = force x distance.

Yes, pitch stability is related to CG and center of pressure

To create "static pitch stability", the goal is to move the center of pressure further back with increasing AOA, which helps lower the nose. The most common way do this is to move weight forward and have a down lifting tail, but this is not the only way.

One can make lift nuetral, or even down lifting wing tips on swept wings. As AOA increases, lift here becomes increasingly positive.

So you can wash out the wing tips, and they will start pushing the nose down if AOA gets too high, just like a horizontal stabilizer/elevator does.

As AOA increases, tail "downforce" goes to 0 downforce, then to "upforce" lift, moving the center of pressure further and further back. This safeguards the wing from reaching stall AOA.

One of my mentors told me "the wing is the symphony, the tail is the conductor" With out a "tail", wing center of pressure typically moves forward with increasing AOA, which is "bad".

Washing out the outer span (i.e. decreasing the geometric incidence of the local section) of a swept wing does not directly increase the static stability of the aircraft (see addendum). The analysis mentions flying wing, but is applicable to any swept wing.

Static stability of a low-speed and structurally rigid flying wing is defined by having a negative variation of pitching moment with increasing angle of attack ($C_{m_\alpha}<0$), and is primarily achieved by the planform and the airfoil distribution:

I'm going to skip why a negative pitching moment slope is necessary for static pitch stability, as this has been well discussed here (e.g.). Since the swept portion is (hopefully) aft of the CG, washout acts like a tailplane incidence and plays very little into stability.

However, stability is not the only concern. Trimmability is the other (some may argue even more important) issue: at the desired wing lift (or angle of attack), we must ensure that the total pitching moment is zero. This is shown graphically below, where a fully trimmed state is point A: 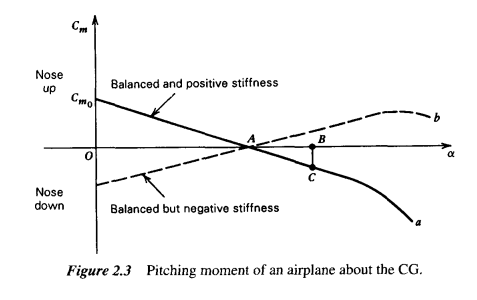 Traditionally this is achieved via pitch surfaces such as tailplane incidence and elevators (by shifting the above $C_m$ curve up and down such that point A can lie at the desired angle of attack). For a flying wing, elevons can be put to use. But it's less effective due to shorter moment arm. If the pitching moment is too negative, we may run out of available elevons to trim or left to maneuver.

Help can come from two sources:

With washout, a larger range of forward CG becomes possible due to elevons alleviation. This indirectly helps with stability if the static margin of available CG range had been too small without the proper washout.

Since washout modifies the lift distribution on the wing, it changes the downwash on the outer span ($\frac{\partial{\epsilon}}{\partial{\alpha}}$), which does affect stability. However, this effect is secondary to what had been mentioned.

14
How does wing sweep increase aircraft stability?
11
Does static longitudinal stability require download on the tail?
3
How does the location of a propeller affect an aircraft's stability?

2
How to calculate the stability derivative of Pitch Moment with respect to AOA rate?
7
Why does aircraft stability increase when it transitions from subsonic to supersonic flight?
3
Does propwash increase pitch stability?
2
Why does the effective alpha/CL increase at wingtip of swept wing?
3
Why do swept wings decrease the drag increase that occurs in transonic flows?
6
Is there any benefit of using a swept wings at low-subsonic speeds?
1
How would a fighter be changed from having static stability to having relaxed stability?
1
How are foam cores shaped for tapered and swept back wings?
0
How can I calculate the tail area required to achieve longitudinal static stability?