Helicopter Flight: What is the reason for decrease in Induced drag with increase in speed?

As per the figure the induced drag will decrease only if the AoA of the blade is decreased — But in the forward flight, cyclic input increases and decreases the AoA throughout the blade rotation cycle.

Also, in forward flight, a component of the Lift force is used to compensate for the parasite drag, so the overall Lift vector will increase. This should increase the induced drag further.

Where I am getting wrong? What causes Induced drag to decrease with an increase in speed? 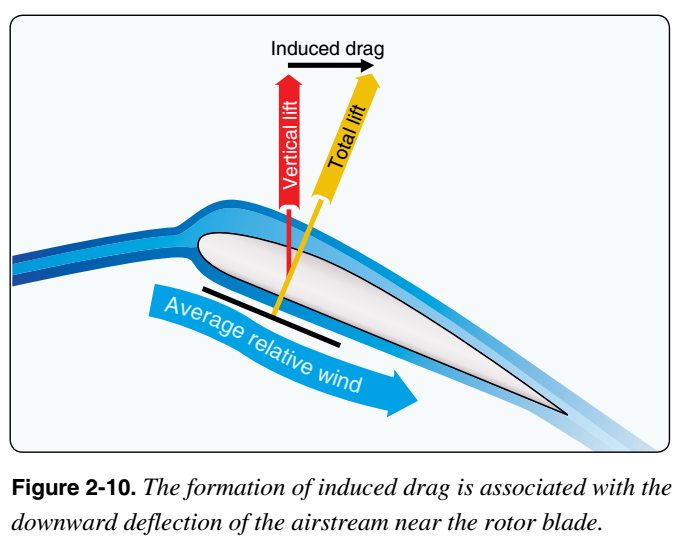 As you mentioned, the main rotor thrust must support the weight of the helicopter in hover, and must also provide a propulsive force to overcome drag in forward flight. However, the induced drag is also a function of how the air is deflected downward by the rotor. The velocity of this downward deflection of air at the rotor is often called induced velocity. This induced velocity is a function of not just thrust, but also the helicopter forward speed, rate of climb, air density, height above ground (when near the ground it decreases, a phenomena known as ground effect), etc.

From your question, which is perfectly logical, there is one aspect that is leading you to an incorrect conclusion. In a helicopter Induced Drag does not increase with speed it reduces. In a fixed wing aircraft as the aerofoil travels through the air it will induce a flow downwards, exactly the same happens in a helicopter. Imagine being in the hover, as each blade rotates its downwash is met immediately by the following blade. As a result, to create an angle of attack the pitch angle requires to be rigged much higher than a conventional aeroplane. So in the hover this induced flow is travelling directly downwards, the angle of attack is high and also the Induced Drag. Now imagine the helicopter beginning to move into forward flight. The moment the disk is tilted with the cyclic a further slight power increase will be needed to maintain height. But soon after, the rotor system will begin to experience an airflow from ahead. This horizontal airflow modifies the direction of the induced flow and in doing so increases the angle of attack (without a change is aerofoil pitch). This effect continues to occur with a continual progressive benefit until about 65kts (for the majority of helicopters) which is regarded as the minimum power speed. Understandably, this effect doesn't continue because as the helicopters speed increases so does the fuselage Parasite Drag and the rotor disk has to be tilted progressively further forward to provide an increasing horizontal component of Total Rotor Thrust to balance this increasing Parasite Drag. So as the speed increases above 65kts, Parasite Drag increase to V^3 up to the helicopters maximum speed.

11
Are the functions of ailerons and rudder similar?

11
Does the downwash created by induced drag increase or decrease lift?
5
For a large commercial plane on landing, does the L/D ratio increase, decrease, or not change much?
7
Is this explanation of adverse yaw correct?
4
On a constant speed propeller, how is blade pitch related to airspeed and efficiency?
11
How does the A350 variable camber system decrease drag?
9
Why is ground effect greater over smooth hard surfaces?
0
Will 3D wing has smaller drag than 2D at same AoA and airflow speed?
3
How are pitching and rolling moments transferred from rotor to the body?
1
Helicopter retreating blade stall: Increasing the fwd speed decreases the tip speed on retreating side and angle of attack. So why limit on V_n.e?
1
What differentiates the entry procedures for spins and snap rolls?