In which direction does air flow over a wing as observed from ground?

A wing flies to the left in the air (no wind). Particles A and B moves to the right in relation to wing.

(i think when observed from ground :

particle A moves up and left

particle B moves down and left

particle C moves down and left

and when wing pass all particles will move down and left) 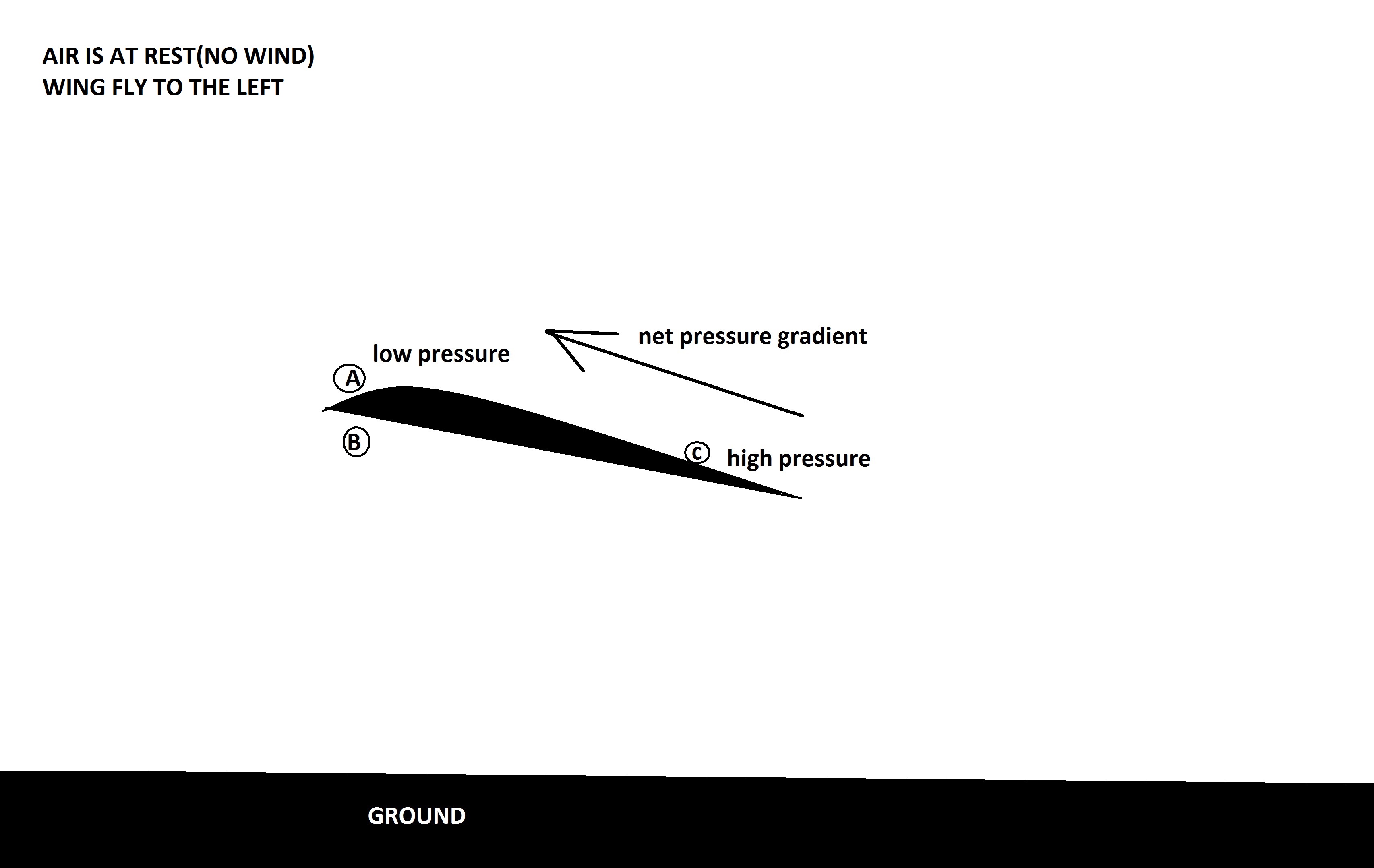 particle A moves up and left

No, up and right

particle B moves down and left

particle C moves down and left

The low pressure region first pulls in the particle A, so it initially moves in the opposite direction of the wing, and then the adverse gradient over the rear part of the wing will gradually accelerate it so it ends up moving a little in the direction of the aircraft. It also ends up moving down much faster than forward, which is how the lift can be much more than the drag.

On highly cambered wings the pressure may be higher than ambient everywhere on the underside, but most wings are not cambered that much and there is some reduction of pressure under them as well, so even the particles moving under the wing accelerate a bit to the right, opposite of the wing, and only then change to moving left along the flight direction.

The circulation theory of lift shows that the flow over a lifting airfoil comprises a steady flow against the direction of travel, superimposed on a circulation of air around the airfoil. It is this circulation which defines the lift, and is in turn generated by the pressure gradients (The pressure gradient you show is far from the most significant one, as most of the action takes place near the leading edge).

Take away the steady flow as you have done, and you are left just with the circulation. The circulation flows up over the leading edge, back over the upper surface, down behind the trailing edge and forwards again underneath. You will see A, B and C moving accordingly. For example A has probably already completed its small forward motion (if any) and much of its upward motion, and is well into accelerating backwards. C is just slowing down, possibly ready to turn down, while B is moving forwards and possibly accelerating.

Of course a given particle does not follow the full circle, you can think loosely of a circulatory loop as a string of particles all moving together (although as stated it is a flow component and the particles are also transiting across the loop).

The flow at the front is fairly well confined, the further back you go the more diffuse it becomes, hence the trailing downwash reaches a great deal further than the upwash at the leading edge.

A similar circular motion is sometimes seen when an object floating on the surface of water is subject to waves passing by.

This is a good thought to consider the wing actually strikes the air in real flight, whereas in a wind tunnel it is the opposite, but the resultant flow patterns are the same.

From the ground, particle A is pushed up and forward, B pushed down and forward, but in that time the wing moves father forward, so relative to the wing, "flow" is backwards.

A moving airfoil at positive AOA can be considered a "pump", creating a "circulation" and "downwash" relative to the wing. Therefor, at any Time 0 to Time X, particle A will be farther behind the wing than particle B, and particle C behind and lower than both from downwash any way you look at at.

Do Time 0 to Time X for A, B, C, and the wing. You will find point of reference will not matter. Their relative positions will be the same at Time X, allowing wind tunnel designers to breathe a sigh of relief.

In your diagram, higher pressure (and slower "flow") should be underneath the wing. The situation you show is what happens when the wing is at too high an Angle of Attack and higher pressure "leaks" over to the top. This also happens at wing tips and is "bad", causing loss of lift and more drag. When this happens at the trailing edge, it is called a "stall".

A wing is pushing the air out of its way. It pushes the air in the direction it moves itself.

Same way if you stir water in a cup with a teaspoon, the water will move in the direction you move the spoon. It will move slower than the spoon so with relation to the spoon will appear moving backwards.

As the wing is also a wedge, some air will also move up and down is it makes its way through it.

4
How is the climb/descent performance affected by wind gradient?
0
What causes pressure disturbances ahead of the wing?
7
Can lift be created without air downwash?
0
Pressure Distribution Pattern around Wing
2
How to take into account wind in aerodynamic forces balance?
0
Why is the circulation around a centrifugal impeller blade tip the opposite to a wing tip?
1
How pressure fields change around wing?
1
Will this specially shaped can produce any lift?