Any reference to books would be highly appreciated.

Natural transition is the transition mechanism that we typically associate with Reynolds number. As flow moves along the airfoil, the local Reynolds number increases and any initial disturbances amplify. When the amplification increases past the maximum threshold that a laminar boundary layer can tolerate, the flow separates locally (laminar separation bubble) and reattaches as turbulent boundary layer. 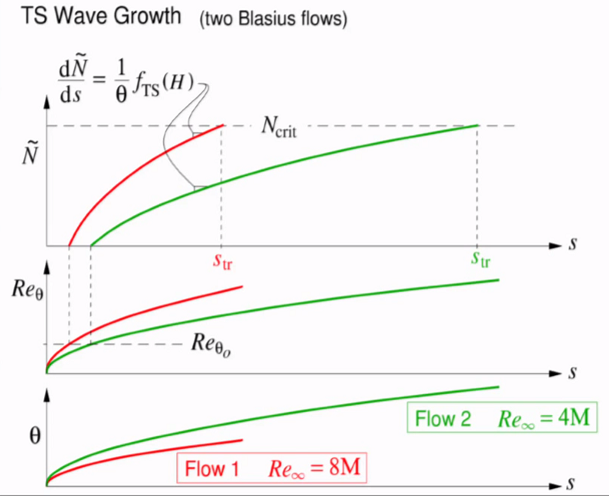 Since the shape of the airfoil affects the pressure distribution, it also affects the boundary layer shape. You can modify the airfoil shape to delay the transition as much as possible in order to minimize skin friction drag. This is the design objective of Natural Laminar Flow (NLF) airfoils. But even on NLF-0215F at a $C_l$ of 0.65, for example, transition occurs at 61% chord on the upper surface, at a free-stream Reynolds number of 5 million.

Forced transition occurs when there is irregularity or protuberance on the airfoil surface. This can be due to manufacturing tolerances, contamination, or by design. Contamination can be due to rain, ice-buildup or even collision with insects.

Thus in practice, actual transition would occur much earlier than predicted via natural transition.

The Reynolds number is the ratio of a characteristic velocity and a characteristic dimension (never mind the viscosity for now). The key is the choice of the characteristic quantities. So, the onset of turbulence around Re=2300, what you often find in fluid dynamics textbooks, applies only to pipe flow, with the pipe diameter used as characteristic length scale.

The flow around airfoils is fundamentally different to the flow in a pipe.

Not the answer you're looking for? Browse other questions tagged aerodynamics fluid-mechanics fluid-dynamics flow or ask your own question.

3
What is boundary layer tripping?
1
Can transition on an airfoil occur without prior separation?

8
Does the Piper PA-28 Cherokee wing have laminar flow behavior?
8
Is the low air pressure on top of the wing the major contributor to lift?
5
What happens when the surface ends at the laminar zone of the boundary layer?
4
How is the flow of air through a NACA submerged inlet determined?
5
Why do wings prefer laminar flow if cd is lower for turbulent flows?
1
Why is it harder to maintain laminar flow on larger aircraft?
2
Does an airfoil in supersonic flow have zero circulation?
13
Can the plane Celera 500L be eight times more fuel efficient than a jet of similar size and capacity?
6
Why do planes employ vortex generators if the laminar flows exhibit a far lower skin friction drag than turbulent flows?
2
Could leading-edge dynamic stall occur for a tripped airfoil?