Is the ratio of HP to weight constant for identical air frames of different sizes? (See Scenario)

In my head it seems logical that there would be a proportion between engine HP and empty weight. For example, the Wright Flyer weighed around 600 LBS empty and had a 12 HP engine. If I were to make an exact 1/6 size scale replica out of the same materials that weighed 100 pounds and had a 2 HP engine, would that aircraft fly as well? Would the performance be exactly the same? Thanks in advance!!!

aircraft-design aerodynamics aircraft-performance airfoil airframe
Share
Improve this question
edited May 3 '20 at 9:17
asdfghjkl
asked May 3 '20 at 8:06

In an aircraft, engine power is used to overcome drag. Drag is related to weight, but not in an 1:1 ratio. There are several types of drag: 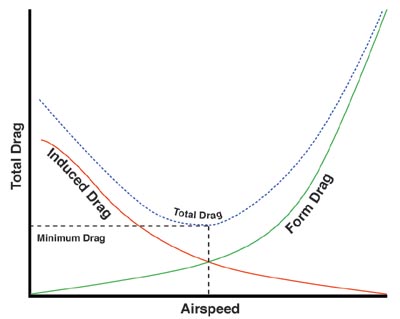 So as your aircraft gets smaller, its weight drops faster than its lift, so the wing loading gets lower.

This also means the control surfaces become more effective, and the roll/pitch/yaw rates go up.

This means your takeoff and landing speeds become lower.

In practice, model aircraft fly at much lower speeds than their fullsize counterparts. So they're in a different part of the drag vs. speed graph shown above. This complicates the calculation of how much engine power you need for a model.

If you made a video recording of a full-size aircraft and sped it up, you'd get a decent approximation of what the scaled aircraft would look like.

Not the answer you're looking for? Browse other questions tagged aircraft-design aerodynamics aircraft-performance airfoil airframe or ask your own question.

6
The stronger the headwind the faster the plane flies if it is in the reverse command regime?
8
What is the theoretical maximum velocity of electric aircraft?
7
What performance issues/symptoms can a pilot expect while taking off above MTOW?
0
How would one calculate the thrust-to-weight ratio for a minimum turn radius?
4
How much does weight really affect the operation cost?
2
What would be the power requirements and performance of a Scroggs-type delta-wing aircraft with a 250 cm span?
6
How much horsepower to weight is required for a 1:1 thrust ratio?
2
Why did the DC-3 have a much higher cruise speed than the HP.42, despite their similar weight and power?