In helicopter's forward motion, how is the forward pitching moment taken care off? 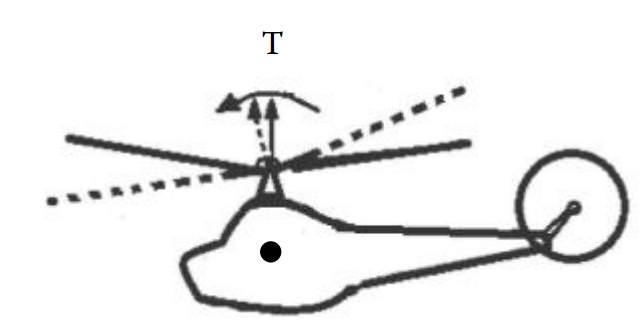 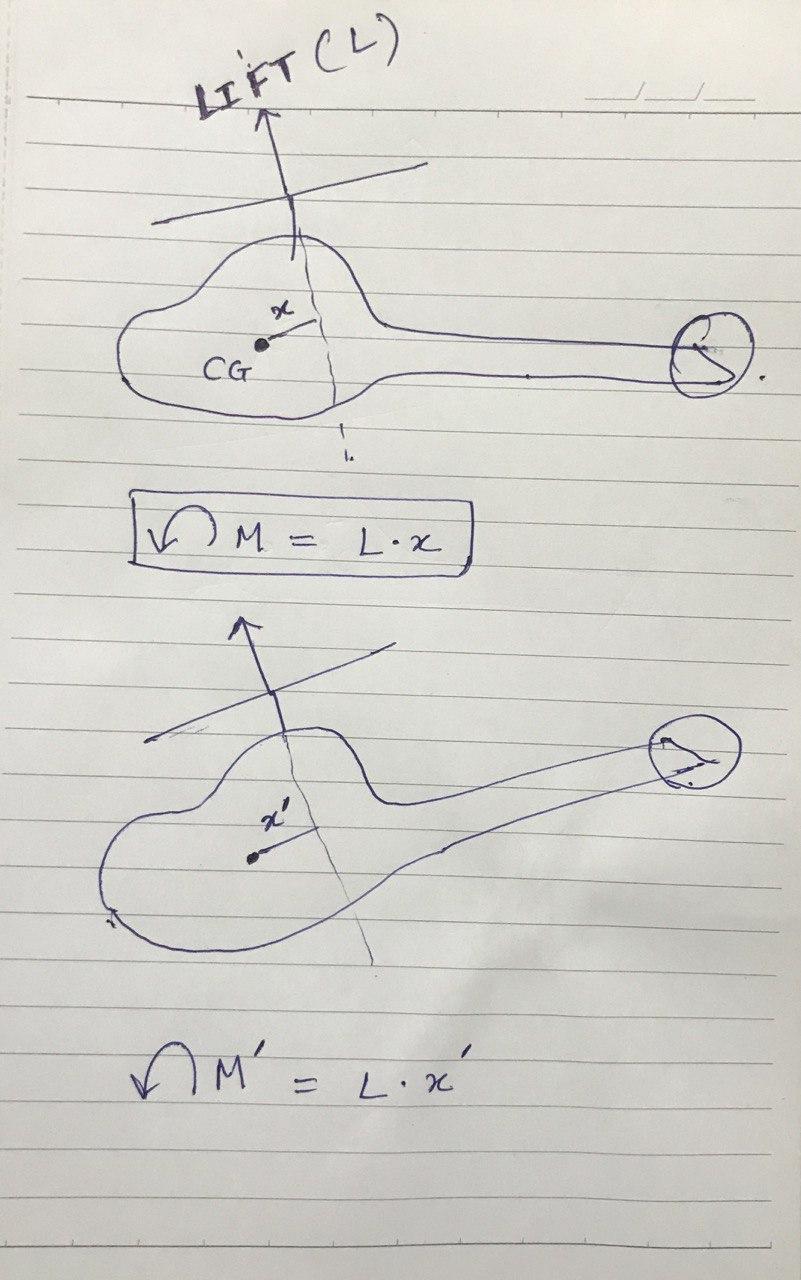 When the rotor disk is in the position shown by the dashed lines, the net Lift is at an angle. It should produce a forward pitching moment about CG (Center of gravity). That can cause the helicopter nose to go down with a further increase in the moment angle and further pitching. What stops/controls this from happening in the actual scenario?

It's a complicated answer, with many contributing factors in a multi-dimensional matrix. In a helicopter flying at forward speed, there are several stabilising stability factors and several de-stabilising ones. 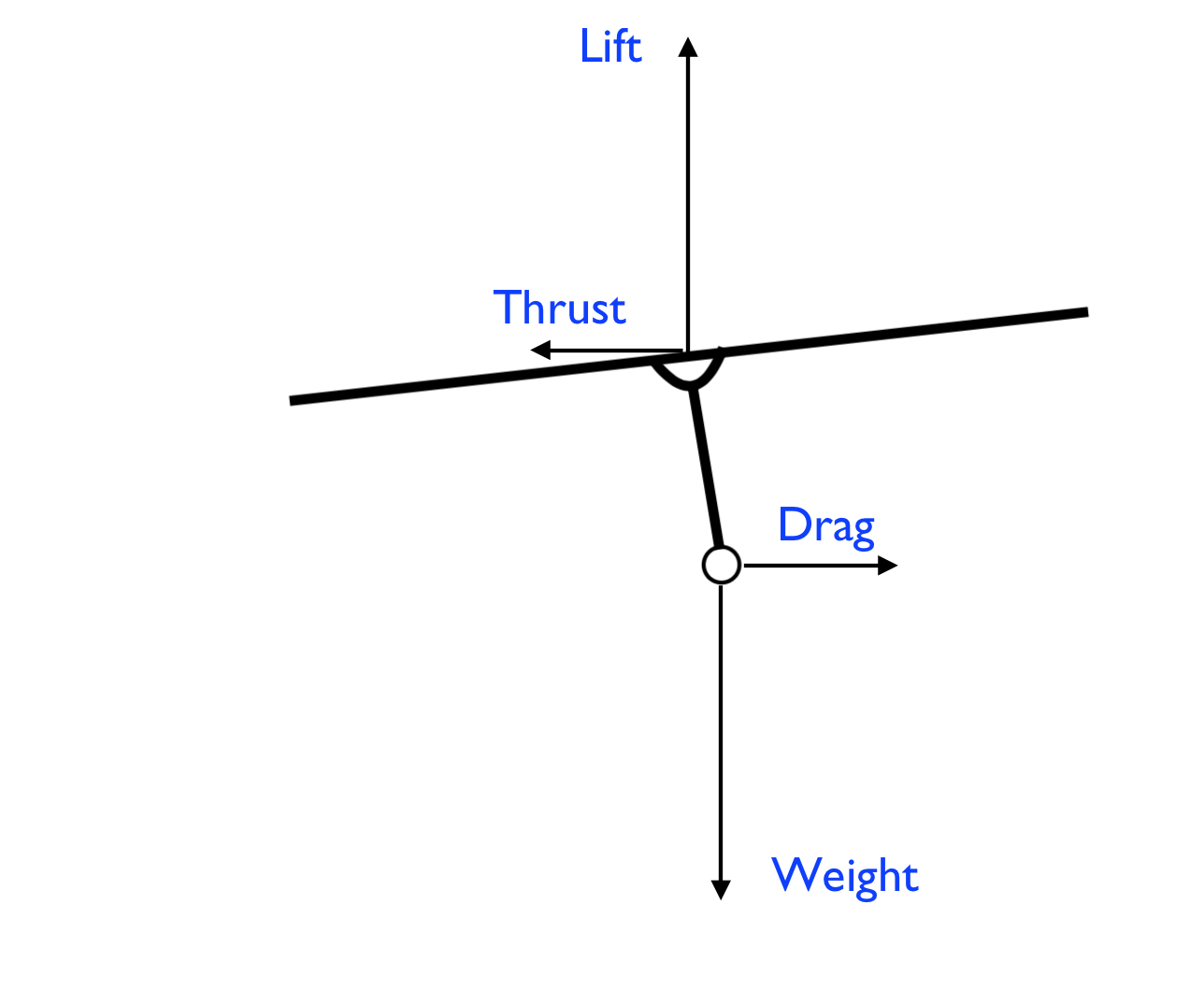 Summarising, the nose-down pitching moment at forward speed is compensated by:

Let's assume that the when the helicopter fuselage is horizontal (skids level), the CG is directly under the rotor mast.

If we want to figure out how things are balanced in a steady-state hover or steady-state cruising flight, it may simplify things to take the top of the rotor mast, rather than the CG of the helicopter, as the pivot point for the torque calculation.

Note that in this case, the tilt of the rotor disk and resulting offset thrustline exerts no torque about our chosen pivot point, but the drag vector of the fuselage--presumably acting near the CG of the fuselage-- does exert a torque about our chosen pivot point. The two effects are interconnected-- in steady-state cruise, offsetting the drag vector is the only reason that the rotor disk must be tilted.

Assume all the mass and all the drag of the helicopter are concentrated at the CG of the fuselage. Draw the vector triangle representing W (weight), D (drag), and F (net force generated by fuselage) with right angles between W and D, and with F as the vector sum of W and D. This triangle must be a geometrically similar triangle to the previous one-- the one associated with the rotor.

Or to put it another way, the net force R generated by the rotor system is directly in line with the CG of the fuselage after all.

This also means that, given all these assumptions, even though in reality the helicopter disk system is free to pivot to some degree with respect to the helicopter fuselage, or vice versa, (see Why does the helicopter's nose go down when the cyclic is pressed forward (in a hover)? for more ), in steady-state cruising flight there is no inherent tendency for the fuselage to hang at a different angle from the rotor disk than it would it there were no flexibility in the connection between the fuselage, rotor mast, and rotor disk system.

Note that if there were some tendency for the fuselage to hang at some angle other than "square" to the rotor disk system in cruising flight, this would affect the position of the cyclic stick required to obtain any given net pitch torque (or lack thereof) from the rotor disk, just as tipping the rotor blade system forwards or aft when the helicopter is at rest on the ground changes the cyclic angle of one blade relative to another. For example, if the fuselage were for some reason hanging straight earthwards from the top of the rotor mast even in high-speed cruise, the (tilted) rotor blade system would be generating a nose-up pitch torque even with the cyclic stick centered.

One effect that could cause the fuselage to hang not "square" to the rotor disk, but rather somewhat closer to straight "down" toward the earth, would be if the drag vector acts above the CG of the fuselage. This is likely often the case in reality.

This whole question is really all about whether the rotor blade system needs to generate a nose-up pitch torque in cruising flight, to prevent the helicopter from nosing down. The answer appears to be generally "no". Of course, if such a pitch torque were necessary, it would be simple enough to position the cyclic as needed to create such a torque.

Now, if you were to ask what happens in the first instant after we use the cyclic to tilt the rotor disk forward in a hover, when the forward airspeed vector and therefore the rearward Drag vector acting on the fuselage are not established yet-- as the top figure with the tilted rotor disk appears to illustrate-- that would be an entirely different question.

Note that none of this really addresses whether the system is stable or not.

Many assumptions have been made here, but maybe this answer will give you a starting point for looking at your problem.

The main rotor often provides a pitch up moment about the CG, opposite to the diagram in the OP. This is due to it being located at a smaller station line, forward of the CG (even after accounting for tilt).

The main rotor is flapped forward at speed, with its thrust tilted forward. However, the vector is still often positioned and oriented to provide a nose up pitch moment about the CG.

The main rotor "hub moment" will indeed provide a nose down pitch moment.

The horizontal stabilizer on the tail will typically provide a large nose up pitch moment at speed.

See this link for such information.

In many ways helicopters are air planes in disguise.

First, you draw the rotor with a slight dihedral. Now draw the lift vector for each rotor and you find: it will actually try to pitch the aircraft back upright (after forward acceleration goes to 0 (constant speed))! Even if the rotor were perfectly straight, its lifting force will not create a pitching torque unless the center of gravity is off-set. (draw dotted lines for the rest of the helicopter too).

Center of drag (as viewed from the front) will also be a factor once the helicopter is moving. The downwash of the rotor on the tail also plays a role.

However, pitching forward, without increased power, will cause the heli to sink because the vertical lift is less. The upward drag aft of center of gravity will cause it to pitch down just like an airplane.

If you pitch forward and add enough power to climb, you may find the nose pitching up! So you add just enough for level flight.

The concept of "pitching forward" and adding "power" from hover is identical to V min sink rate compared to V "best glide" in airplanes. 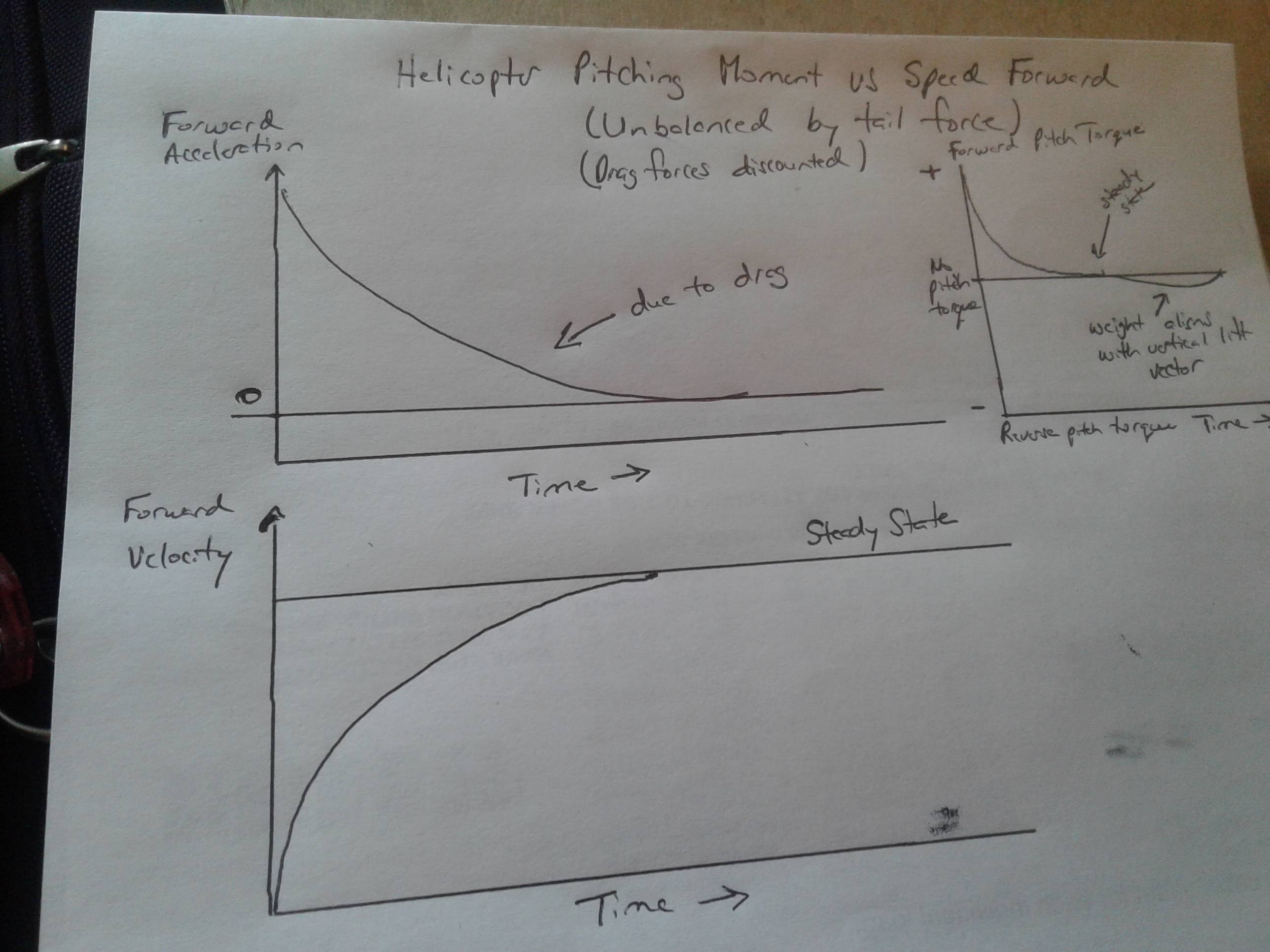 30
Why is the UH-60 tail rotor canted?
28
Would a helicopter with the blades on the bottom fly the same, if at all?
3
Why does the helicopter's nose go down when the cyclic is pressed forward (in a hover)?

0
if center of pressure moves forward with angle of attack, then does it move forward of center of gravity also at a particular angle?
19
How does this RC helicopter keep itself upright?
1
How Helicopters Change Attitude (Gyroscopic Precession or Thrust Vector Tilt)
6
Why does the use of reverse thrust on the DC-8 generate a pitch-up moment rather than a pitch-down moment?
3
How are pitching and rolling moments transferred from rotor to the body?
2
Why does pitching moment coefficient decrease with an increase in the angle of attack?
1
Power changes and trim forces. related to position of Center of Mass (CoG), or Center of Pressure?
0
How do fighter jets stop pitching motion after a elevator deflection?
5
Why do most aircraft with variable incidence tailplane have the possibility to trim much more degrees for nose up than for nose down?
7
Is a trimmed flight not always an unstable system?