Which is more efficient: a jet engine or a rocket-powered engine?

This is of course in terms of fuel consumption per distance traveled, as I am curious whether a rocket engine allows an airplane to travel a distance more quickly compared to a jet engine when consuming the same amount of fuel.

Jet engines are far more efficient. The metric to compare them is 'Thrust-specific fuel consumption', i.e. the amount of fuel used to produce one unit of thrust. Fuel consumption per distance traveled is proportional to this.

A few figures from that page:

So a rocket uses ~10 times as much fuel to produce the same thrust. Even if you add afterburning, a jet is more efficient.

During and after World War 2, there was some interest in rocket-engined aircraft. The Me-163 saw service in the Luftwaffe.

The interest continued for a decade or so, until jet engines with afterburners were developed. One exponent of that interest was the Saunders-Roe SR-53, a short-range interceptor with both a jet engine and a rocket.

It was developed in response to an RAF requirement for an aircraft that could take off and get to high altitudes very quickly; more quickly than could be attained with the jet engines of the day. 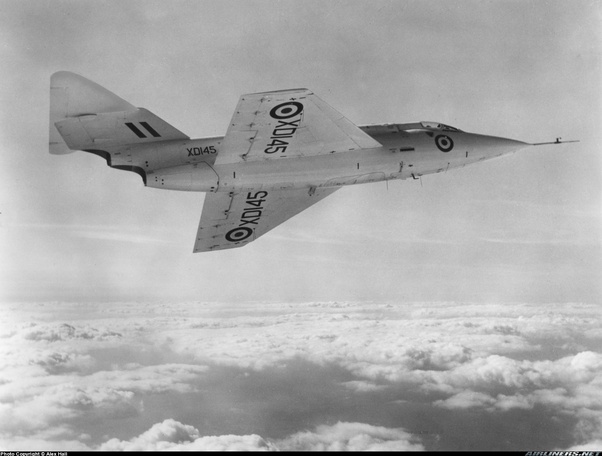 speed:
jet: 180 kts
rocket: accelerate to Mach 2 once, then the fuel ran out

It was superseded by the EE. Lightning, which had 2 afterburning jets. It had 4 times the range despite carrying less fuel and more payload.

The key to why an air-breathing jet engine is "more efficient" is that it doesn't need to carry oxidizer, it can just use the atmosphere. Carrying oxidizer is very heavy, which will severely impact the range and speed of the aircraft.

Biggest disadvantage of the rocket is having to carry it own oxidizer, as 1 lb kerosene requires more than 3 lbs of oxygen for combustion. Not using a wing also greatly reduces efficiency. The winged jet is around 40 times more efficient for this application.

Not the answer you're looking for? Browse other questions tagged engine efficiency fuel-consumption or ask your own question.