I was playing around with the breguet range equation recently, and came across a suprising result, that propellers have less range than jets, despite having greater efficiency.

The range equation for a prop is:

where C is the SFC, in lb/(hp * s), and R is the range, in feet. Note that the 550 here coincidentally is the same as the speed in the next calculation, but the 550 here is actually a conversion factor from hp to lb-f/s

According to wikipedia, the most efficient turboprop engine is the NK-12, used on the Tu-95 bomber (and Tu-114 airliner), and that engine gets a SFC of 0.36 lb/(hp*h). Assume a propeller efficiency of 0.8, which is typical.

The range expressions for jets and props is identical, except for the coefficient, and 5808002.4 is greater than 4400000, so therefore, jets have better range, even on paper, than props, assuming same L/D ratio and fuel ratio. This is kinda suprising, given that props are quoted to have higher efficiency than jets. I've heard people say props have less range, but I've always heard it backed up with the evidence that "props are slow, and people like to go fast". Are my calculations and data correct? If they're correct, why, intuitively, do props end up having less range?

Clarification: user3528438 has pointed out that some turboprop engines provide both a power specific fuel consumption number, as well as thrust specific. However, if you plug the thrust specific fuel consumption number for that turboprop into the jet range equation (essentially treating the prop as a jet), the resulting range is very different than the range you'll get if you plug the power specific fuel consumption number into the propeller equation -- so which one is right? I doubt my formula for propeller range is wrong (though I might be using it wrong - could someone please check) because the same formula (but without the conversion factor, because they're using metric) is found here - https://nptel.ac.in/content/storage2/courses/101104007/Module2/Lec8.pdf.

I also have my derivation of the formula on hand too, if anyone wants to check that.

For more background, this question is about the usage of Breguet Range Equation (I find this explanation better suited for this question)

There are many problems with your calculation: 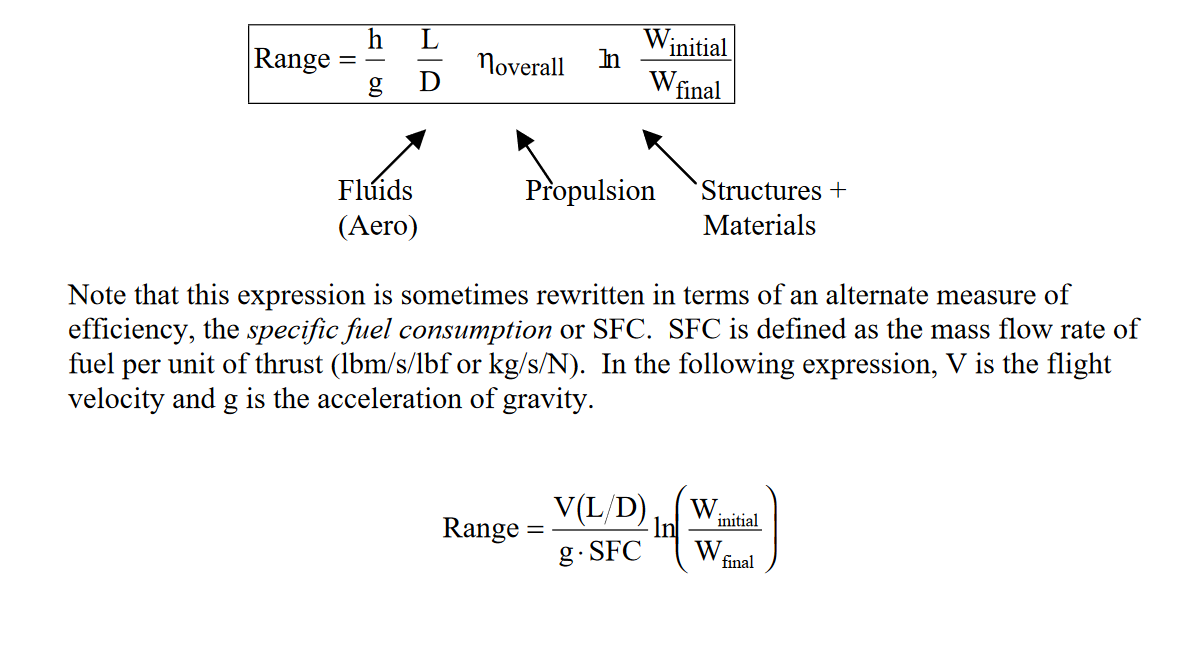 If you look at the Breguet Range Equation you see the only difference between prop case and jet case is TSFC. So to compare relative range differences, you only need to compare TSFC and avoid all other complications.

I think there are some confusion here, in particular, as @user3528438 said, with units used in formulas. I'll also try to highlight problem with another point of view.

First of all, be really careful when using the first formula. At first, I thought it was not consistent regarding range R units. The way you make calculation formulates the range on « ft2.s-2 ». After taking a look on the demonstration of the paper you shared, I realised that the SFC is here defined as « Newton of fuel » / « Power x time ». It seems it does not provide any error here cause your SFC uses lbs and it is equivalent to pound force lbf.

Then, it is important to notice that both formulas say exactly the same thing ! There is not a « jet range equation » or method « treating a turboprop as a jet » :

Here we have 2 definition TSFC and PSFC, introduced in the previous section, both sometimes called Specific Fuel Consumption:

According to wikipedia, a power is the rate of a system doing a work or providing energy by units of time. In our problem, it's a measurement of how fast a mechanical work is given to the aircraft by the engine (e.g. T x V).

Now take a look about your applications:

So which case is the true one ? Probably none of these.. Intuitively, I want to say a turbofan has more chance to keep TSFC constant when changing flight condition while is PSFC for a turboprop. Indeed, you can try to reduced little by little the speed condition and find the limit where it's preferable to have a turboprop rather than a turbofan. But it is huge assumptions here so I'm not confident with results. Nevertheless, it could be interesting to compare it with flight speed of most aircraft equipped with turboprop.

However, this provide a first explanation why turboprop is usually operating at low speed. The other reason is a propeller need to have large diameter to be really effective and give enough thrust. Therefore we got an aircraft speed limit at the point where the flow become supersonic at blades tip. You can still reduce the rotational speed but it could be difficult to reduce it even with gearbox without affecting overall gas turbine efficiency.

In conclusion, SFC is an important parameter of engine performance. But it is good to keep in mind that it is calculated for specific design points (e.g. flight conditions) thus dependent of the aircraft mission. SFC is specially used for comparing 2 engines designed for same aircraft.

Update As @Zeus has pointed out correctly: Drag coefficient stay constant in my scenario, not drag -- I've updated the explanation accordingly. Sorry for that blunder. The conclusion does not change: Engines with constant PSFC only have an advantage when flying slowly and get worse much quicker than engines with constant TSFC -- but actual engines are mostly in-between these days.

(The second thing of note: quoting equations which include unit conversion factors is dangerous, and doing so without specifying which units are used is doubly so.)

Power is thrust times velocity, which means that although a propeller can have a much higher propulsive efficiency (propulsive power vs shaft power), it also scales quite differently with speed, even ignoring the fact that propellers have difficulty operating above Mach 0.6:

Assume we have a series of aircraft, each designed to fly at a particular speed (all well below the speed of sound), with the same glide ratio and the same weight. This means they all fly at the the same drag coefficient, and the required thrust scales with the square of speed. Now we decide which kind of engine to use for which one of them.

Let's design a family of jet engines, each of which delivers a certain thrust, and all of which have the same constant TSFC. This means 1 Newton of thrust costs the same amount of fuel per second, independent of how fast you're going. The fuel flow would of course still increase with the square of velocity because you would need more thrust the faster you're going. And that means that fuel burn per distance travelled would increase proportional to speed. Most jet airliners are actually flying faster than their best glide ratio (= lowest drag coefficient) would suggest, because that minimizes fuel per second, not fuel per distance. They're even flying a bit faster than what they@d need to do to get minimum fuel per distance because for an airline, time is money. That's why they're burning a bit of extra fuel in order to arrive faster and do more flights with fewer aircraft.

Using propellers with reciprocating engines, though, although they're converting more of the shaft power to thrust, the fuel flow through the engine scales with power, not thrust, and power needed for constant thrust scales with velocity. So doubling speed at equal thrust requires twice as much fuel per second, but since thrust increases with the square of velocity, fuel flow actually scales with the cube of velocity. So fuel consumption per distance scales with the square of velocity, proportional to drag (still assuming the same drag coefficient for all aircraft, of course). That's why the most efficient propeller aircraft would be flying at the minimum drag, i.e at their optimum glide ratio, fairly slow. Going faster gets expensive quick.

So however efficient your propeller is at some (low) speed, the faster the aircraft for which you want to decide on an engine, it will eventually be worse off than a jet because its fuel per distance quadruples when doubling speed, but the jet's only doubles. At whichever velocity our fictional jet engine and piston/propeller get equal fuel economy, the move to the next-faster airraft with a propeller will be twice as expensive as with the jet. And at the same time, the same aircraft with a jet will be flying faster, too.

That's the reason why piston engines with propellers are the weapon of choice for long-endurance flights, where distance covered is less important than time afloat, or where costs are more important than speed. In such cases, a jet would get much worse range!

However, most larger propellers are driven by turboprops these days, and turboprops do not have constant PSFC, since they have a turbojet core providing the shaft power, which benefits from the increased pressure of air in the intake at higher velocities. And modern high-bypass turbofan engines don't have constant TSFC, either, since they have more losses in the bypass duct at higher velocities at constant thrust. In fact, an extremely high-BPR turbofan starts to approach the characteristics of a comparably low-BPR turboprop (except at large Mach numbers, but we're still ignoring that here).

It's dangerous to confuse TSFC and PSFC. An engine with constant PSFC (old-fashioned piston-driven propeller) might fly a lot more efficiently at low speeds but gets worse quicker than engines with constant TSFC.

Because nobody (except for this guy -- who is amazing) wants to take days to finish their intercontinental flight, and because propellers don't work so well at higher Mach numbers, commercial long-range flights fly at speeds at which jet engines (that is: Turbofans) use less fuel per distance than propellers with reciprocating engines, and they get higher range in those circumstances. For high-efficiency flying over long distances, where speed is not that important, however, Propellers are still popular, and have better efficiency. See for example auxiliary engines for sailplanes, or most military transport aircraft. For the latter, range is everything, speed (and noise...) are secondary. However, since those are built to military specifications, they're not that useful as civil cargo aircraft, and since the civil cargo aircraft market is very small, most of it is covered by converted passenger aircraft. If there were dedicated civil cargo aircraft of similar size as long-range passenger jets, they'd probably fly much slower and use turboprops (noise regulations permitting...).

Aside Another issue with piston engines is that their performance reduces the higher the fly, as the air thins. This issue can be reduced by adding a turbocharger, but a jet engine already is essentially a very big turbocharger with a turbine attached. The other advantage of jet engines is their power-to-weight ratio. This is why e.g. most helicopters don't use piston engines and have turbines instead.

Not the answer you're looking for? Browse other questions tagged aircraft-performance turbofan turboprop performance-calculation range or ask your own question.

-2
Why don't airliners have turboprop engines instead of jet engines?

5
Is there an equation which allow us to perfectly match a helix propeller and an engine?
47
Why is the Tu-95 so efficient despite having propellers that spin faster than the speed of sound?
1
How to calculate the fuel flow using the thrust specific fuel consumption?
7
Would it take 7 to 10 times more energy to lift a turbofan-helicopter?
1
How do I estimate piston aircraft fuel efficiency?
0
Turboprop vs Turbofan: How to compare Specific Fuel Consumption
3
What factors contribute to the poor off design performance of turbofans?