Can such an aircraft take off vertically? 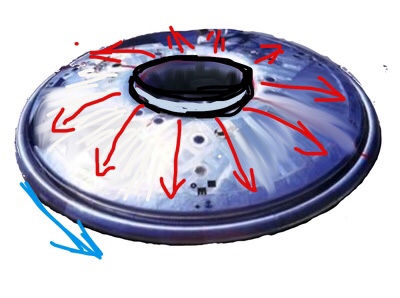 This us the Avro-Canada VZ-9 .He focused on the " Coanda " effect capable of flying a possible flying saucer.

A.V. Roe (Avro) Aircraft Limited (later Avro Canada) based its design concept for the Avrocar on using the exhaust from turbojet engines to drive a circular “turborotor” which produced thrust. By directing this thrust downward, the turborotor would create a cushion of air (also known as “ground effect”) upon which the aircraft would float at low altitude. When the thrust was directed toward the rear, the aircraft would accelerate and gain altitude.

Each service had different requirements: the Army wanted to use it as a subsonic, all-terrain troop transport and reconnaissance craft, but the USAF wanted a VTOL aircraft that could hover below enemy radar then zoom up to supersonic speed. Avro’s designers believed they could satisfy both services, but these two sets of requirements differed too much.

Research data originally indicated that a circular wing might satisfy both the Army’s and Air Force’s requirements, and Avro built two small test vehicles to prove the concept.

Designated the VZ-9AV Avrocar (“VZ” stood for “experimental vertical flight,” “9” for the ninth concept proposal, and “AV” for Avro).

Tests with scale models at Wright-Patterson AFB, Ohio, indicated that the cushion of air under the Avrocar would become unstable just a few feet off the ground. The aircraft would be incapable of reaching supersonic speeds, but the testing went ahead to determine if a suitable aircraft could be developed for the Army. The first prototype was sent to NASA. There, wind tunnel tests proved that the aircraft had insufficient control for high speed flight and was aerodynamically unstable.The second Avrocar prototype underwent flight tests that validated the wind tunnel tests. If it flew more than three feet above the ground, the Avrocar displayed uncontrollable pitch and roll motions, which the Avro engineers called "hubcapping." The Avrocar could only reach a maximum speed of 35 mph, and all attempts to end the hubcapping failed. The project was cancelled in December 1961.

Edit: The 124-blade "turborotor" was placed in the center with the majority of the thrust flow directed straight down through an opening in the floor. Part of this flow was separated and redirected to operate the control system which ran around the outer periphery of the disc. Power for the rotor was generated by three reactors attached to the main structure. Each engine had its own fuel and oil tanks. The thrust deflection control system consisted of a large ring located around the main disc, with the flat part inside. The pilot's controls moved the ring in relation to the rest of the aircraft, affecting the air flow. The vertical lift could be increased by lowering the ring entirely. Tilting the ring resulted in asymmetric thrust for directional control.

Not the answer you're looking for? Browse other questions tagged aircraft-design aerodynamics wing flight-controls or ask your own question.

4
How can an airplane keep going forward if it has no thrust?

8
Where can I find that video of a college built blown wing aircraft?
2
Could a variable sweep aircraft also use negative angle?
4
What would the pros and cons be of this 'zig-zagged' high-sweep wing planform?
2
Will creating a strong back pressure within a ducted propeller enable an aircraft to attain a higher altitude?
2
How to design a near vertical take off airplane?
5
What effect does wing loading (high and low) have on aircraft performance?
0
The principle in 'Trompe' is applied to airplanes?
0
Could an arrow planform be better for a supersonic aircraft than a delta? Why?