What mechanism did the turbine reversers of early high-bypass turbofans use?

Nearly all jetliners nowadays use fat, efficient high-bypass turbofans (turbofans with a bypass ratio greater than or equal to 5:1). As the vast majority of a high-bypass turbofan’s thrust comes from the air blown past the engine core by the fan, rather than from the superheated air and exhaust gasses coming out the core’s tailpipe, thrust reversers on these engines generally only redirect the bypass air (saving on maintenance costs and reliability, as the reverser never has to come in contact with the hot, corrosive core exhaust); as such, these types of reversers (usually cascade-type reversers, where the entire rear portion of the fan cowling slides rearwards, although some smaller aircraft use clamshell-type reversers, where several discrete petals open up in the fan cowling to redirect air forwards) are often known as fan reversers (as the air they redirect has passed through only the engine’s fan, and no other rotating parts of the engine).

However, very early high-bypass turbofans (GE TF39/CF6, P&W JT9D, RR RB211), used primarily on the first generation of widebodies (747 Classic, DC-10, L-1011, A300B1/2/4), also included separate turbine reversers, which redirected the engine’s core exhaust. Apparently, they were unreliable and required frequent maintenance (due to their frequent exposure to the core’s superheated, corrosive exhaust gasses), they were yet another complicated mechanical system on an already-very-complicated airplane, and they provided little additional stopping power on top of that provided by the fan reversers (due to the core of a high-bypass turbofan providing only a small fraction of the engine’s total thrust); as such, most airlines deactivated the turbine reversers on their fleets after a few years.1

The only reference I have handy at the moment that actually points out the turbine reversers is this diagram of the DC-10-30’s wing-mounted (#1 and #3) engines and pylons. Unfortunately, I do not have access to a copy of the DC-10 Structural Repair Manual, so this is all I have to go on regarding its turbine reversers: 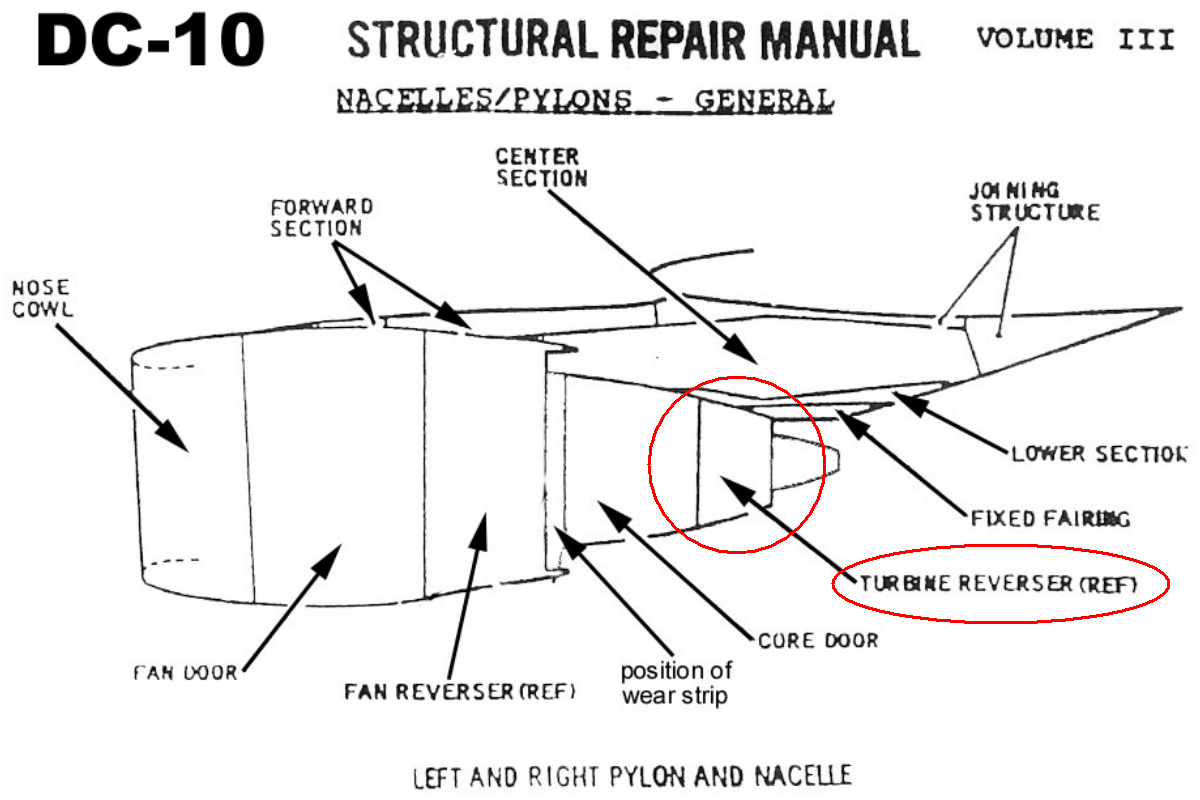 (Image by McDonnell Douglas, via the BEA [page 102, discussing a part which came loose from a different part of the CF6-50 engine, later resulting in damage to another aircraft]; modified by me.)

Other than clearing up the location of the turbine reversers (which wasn’t that much of a mystery to begin with), the diagram provides essentially nothing else in the way of information. What sorts of mechanisms were used for the turbine reversers on these early high-bypass turbofans? Did they use a target-type mechanism (the kind that one immediately thinks of when one hears the term “thrust reverser”, with the two big bucket doors swinging out into the airstream behind the engine), like those nearly ubiquitous on the older airliners equipped with turbojets or low-bypass turbofans? Clamshell doors? Something else?

1: I can think of one other potential problem; the core exhaust of a high-bypass turbofan is considerably hotter, less dense, and oxygen-poorer than the bypass air, and, thus, would tend to be more prone to causing engine surges were it to travel far enough forward to be reingested into the engine intake. Even redirected bypass air (heated solely by the compression imparted by the engine’s fan) can easily cause an engine to surge (this is one of the reasons why the use of reverse thrust is not recommended at low speeds, the other biggie being the danger of the engine ingesting loose debris kicked up by the reverser airflow), and the much-hotter and somewhat-less-oxygenated core exhaust would presumably be even more surge-promoting were it to enter the intake; however, I do not, as of yet, have any solid evidence that this was a problem in practice, so this is pure speculation on my part (which is why it’s in a footnote, rather than the question itself).

You're asking about turbine (hot) reversers of early high-bypass turbofans.

It had the same mechanism as the cold bypass (blocking doors), similar to what the C-17 (right image) uses nowadays. 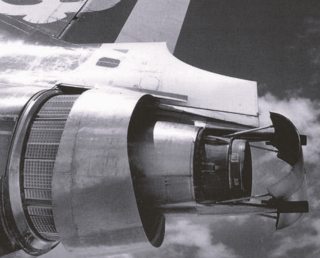 It had target-type, but only during development.

Design Features of the CF6 Engine Thrust Reverser and Spoiler (sae.org) and airliners.net

It had– "something else."

5
Why do large civil airliners use cold rather than hot thrust reversers?

13
Why didn't early jetliners use turbofans?
4
Why are most turbofans tractors, but most propfans pushers?
4
How do thrust reversers in high-bypass turbofan engines counteract initial thrust?
4
Why do the 737-100/200’s thrust reversers blow fully open if hydraulic pressure is removed while the reversers are partly open?
6
Why did the Mercure use cascade-type reversers?
2
Why can’t the newest high-bypass turbofans run at their EPR, temperature, and RPM limits simultaneously at sea level?
2
Are aircraft certified for inflight thrust reversal required to demonstrate controllability in an asymmetric-reverse-thrust scenario?
8
How can a turbofan's fan generate thrust in cruising flight if air is being slowed down?