Why is the F-35B's elevator not in neutral position when in vertical flight mode?

I was watching videos of F-35B taking off and landing vertically on ships when I realized that when transitioning from horizontal to vertical flight mode (I don't know the exact vocabulary to describe that), the horizontal elevator moves to "stick pushed full forward" position. The elevator is also put in that unusual position when transitioning from taxiing to a vertical takeoff. I know that the elevator position is not significant in vertical flight as attitude is controlled via non-aerodynamics means. Thus I wonder why this control surface is then put in that position for that flight phase instead of staying in its previous position or in a more neutral position.

I'm even more confused as this behaviors doesn't seems to be reproduced on other VTOL fighters such as the AV-8B or the Yak-141.

In this video you can see it better I think:

I drew on a screenshot of the video from the side where you can see the air moving under the aircraft.

Compare this to the Fig. 1 in the paper linked by "Anonymous Person" here in the comment section of your question: http://ltces.dem.ist.utl.pt/lxlaser/lxlaser2016/finalworks2016/papers/03.2_3_366paper.pdf 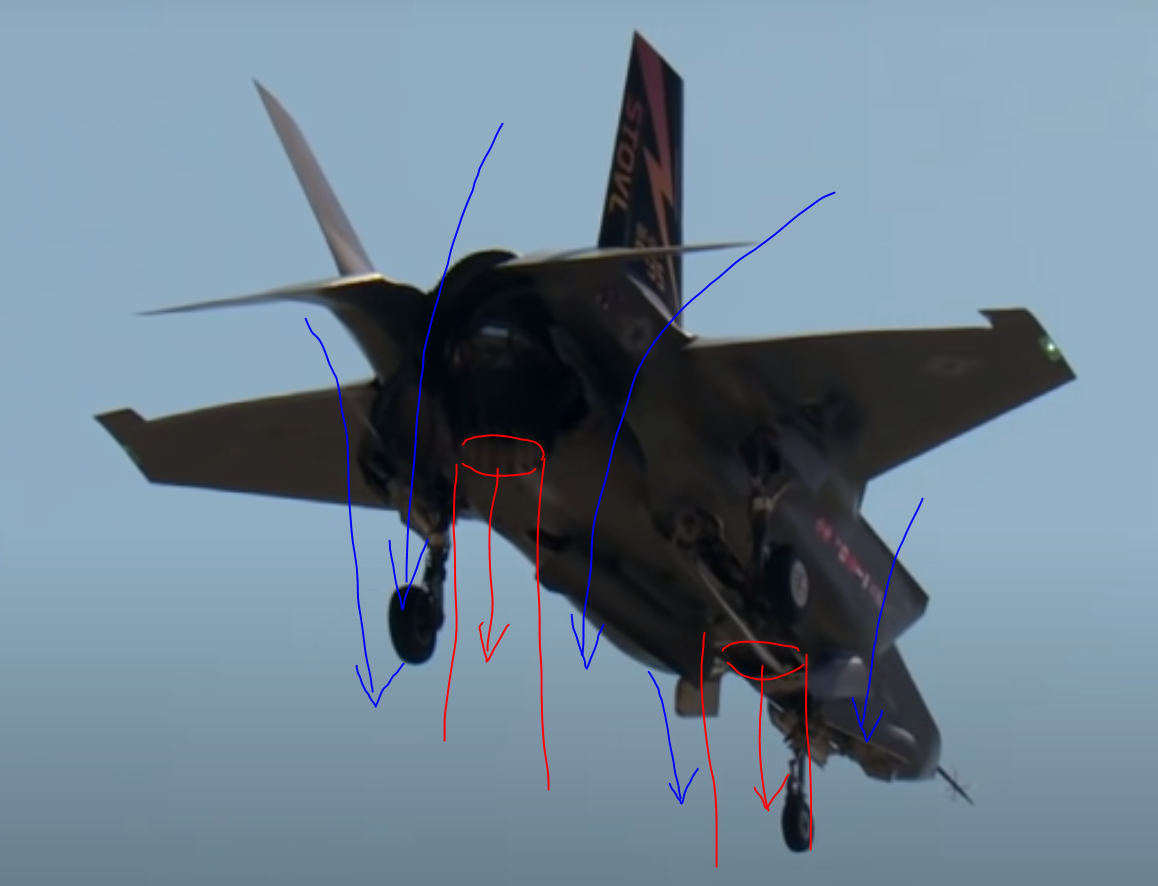 Again I drew on another screenshot of the video and illustrated possible air currents that can freely move around the airframe: aft of the exhaust duct and to the left and right of the vertical stabilizers. As you can see the flaps are also extended which helps guide the air around the wings. There probably is a similar airflow around the front section of the fuselage where the wings are not blocking the flow and the fan is pushing the air down.

In a vertical descent or climb the tailerons also create less aerodynamic drag in this configuration than in a leveled attitude so the pitch inducing effects due to the large surfaces at the rear are reduced.

It could also be beneficial to angle the tailerons trailing edge down for a vertical landing or a short takeoff to increase the lift at the rear end by blocking the escape path for air trapped under the rear end of the aircraft. Essentially preventing the cushion of air to escape at least when in ground effect.

Vertical flight needs the big panel behind the canopy open, to admit air to the LiftFan® that it otherwise covers. While that's open, in the transition to horizontal forward flight it would pitch the nose up. The deflected elevators might compensate for that, although the downward-vectored thrust at the rear of the airplane compensates more effectively during slow forward flight (as shown in the video in Anonymous Person's comment.)

The AV-8B lacks such a speed-brake-like protrusion, so it needs no elevator deflection to compensate.

The Yak-141 has what looks like a smaller panel. Photos of it hovering show no elevator deflection, but the far-aft flaps are strongly deflected, perhaps for the same purpose.

Not the answer you're looking for? Browse other questions tagged vtol elevator f-35 or ask your own question.

3
Is it correct to say "the up-elevator position decreases the camber of the elevator"?
10
Why do some Mach trimmers move the elevator?
1
Why does elevator dropdown occur in some loss-of-flight-controls accidents, but not others?
1
Why did the RAF buy the F-35B model and not the A model
21
How does the F-35B not flip over during transition?
0
Why does the DHC-6 have only one set of elevator cables?
34
Why do military jets sometimes have elevators in a depressed position when parked?
8
Does the yoke move when trimming a THS like it does when using elevator trim?