How does this test flight escape aparatus work?

I was watching this video about the test flight escape systems on a Bombardier flight. In the video, this machine is shown: 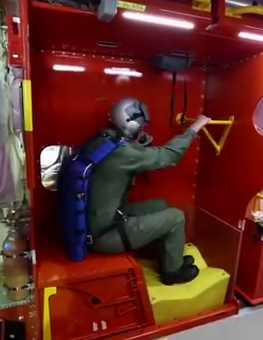 The yellow box moves up and down in the video. Does it move up and flip the airman over, mashing their feet? Or does it shoot down out of the airplane and create a hole to jump out of? If it's the latter, why are they sitting instead of standing?

Qualification: I am an FAA master parachute rigger and taught sport skydiving for 10 years.

Most of the comments on the question are correct - the red slide will extend below the airplane and act as a wind buffer so you can clear the fuselage before the wind blast hits you. The yellow part is a cap that would be removed.

No one would clip a static line to the plane in an evacuation - you want to be well clear of the airplane before opening your own chute. The blue packs are the real thing, I've packed plenty of them. There's a 26-foot round parachute inside. Rough landing but usable by anyone with very little training.

How usable this contraption would be is a different question - skydiving is done at about 100 knots, well below the speed of jets. And it also requires a stable aircraft - if that plane loses it's tail and starts to spin no one will be using the escape slide simply because it will be impossible to reach it. The "bail out in the event of emergency" concept is a bit flawed - if the airplane is flying well enough to bail out then you don't need to. There's a very good reason the military spends a fortune on ejection seats.

Side note - the Space Shuttle had a crew escape process, but NASA considered landing a shuttle on anything other than a proper runway to be non-survivable.

Not the answer you're looking for? Browse other questions tagged safety flight-testing evacuation or ask your own question.

9
Has there ever been a successful 'bail-out' during an airliner test flight?

19
How do test pilots determine an aircraft's capabilities?
4
Does every Safety–of–Flight Test (SOFT) include full testing of each and every equipment?
5
How many hours of test flight does a general aviation aircraft go through before delivery?
7
How do I become a flight test engineer?
5
What is the difference between Flight Test and Test Flight?
9
How does ATC control / separate Airbus Industrie test flights?
7
Were there any test flying incidents during which the pilots managed to escape the plane?
8
Who was the first flight test engineer?
1
How do Flight Test Engineers plan and execute sortie profiles?