What causes a plane to lose its roll momentum

I am currently developing a flight simulator but there is one force I can't figure out how to simulate using real world physics. When the pilot pushes the stick to the right, the plane will reach a roll rate that it will keep; and when the stick comes back to its neutral position, the plane will stop rolling, more or less quickly.

Is there a formula, or an approximation that explains how the plane will stop its roll? On what does it depend? Apart from wing area, does airspeed and lift impact this? Or does it depends on angular velocity?

I need a formula that I can compute to slow my roll down.

What you want is the roll constant $\text{T}_R$. This is basically one of the characteristics wich determines the equations of motion of an aircraft. It gives the slope of the roll speed increase over time with full aileron deflection and an ideally stiff wing, and equally the rate of decrease once the ailerons are set to neutral during a rolling maneuver. 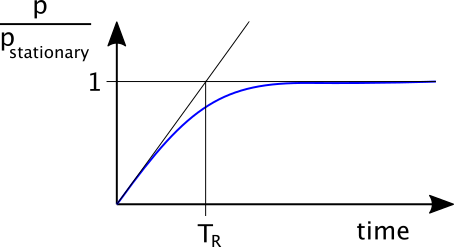 With p the dimensionless roll rate, m the aircraft mass, i$_x$ its radius of the momentum of inertia about the roll axis, S its wing surface, b the wing span, v the flight speed, $\rho$ the density of air and $\text{c}_{lp}$ the roll damping coefficient, the formula is

When the pilot moves the stick, the aircraft will accelerate into the roll but the acceleration will diminish with the square of roll speed until an asymptotic value is reached. This acceleration grows with increasing air density, flight speed, roll damping coefficient and lower wing loading and smaller square of the ratio of roll inertia over wing span. Same in reverse: Stopping will be fastest under the same conditions.

For the roll damping coefficient, use this approximation for wings with an aspect ratio AR larger than 4:

Since this is a damping coefficient, it makes sense to be negative.

The asymptotic value is reached when the propelling moment from aileron deflection equals the retarding roll damping:

For an explanation of this equation and all the terms used please see this answer.

Please note that this is all only valid for a stiff airframe. Increasing dynamic pressure reduces aileron effectiveness because the wing will warp when ailerons are deflected. Assume a linear decrease with dynamic pressure until only a fraction of the ideal roll acceleration remains at top speed and low level flight.

Now you ask about roll damping torque and that cannot be explained in the comments. Look at the last equation – it is already there, albeit dimensionless. To get from there to an actual torque, multiply by wing area, semispan and dynamic pressure:

with $\omega_x$ the actual angular speed in rad/s. Do the unit check - this is actually a torsion moment [Nm]. Please note that I used the reference length for lateral moments used in Germany; the US uses the full span instead of the semispan. So make sure you check which reference length your sources use!

Your question is an essence a question about aerodynamic damping in the roll axis. As the aircraft rolls, the rolling motion increases the angle-of-attack of the descending wing and decreases the angle-of-attack of the rising wing, eventually causing the lift created by each wing to be equal despite the deflected ailerons. At this point roll torque is zero and the roll rate can no longer increase. If the stick is brought back to center, the roll torque from aerodynamic damping will soon cause the rate will soon drop to zero, or to near zero. (Yes, it is possible for an airplane to tend to roll toward a steeper or shallower bank angle with the stick centered, but the roll rate is much lower than we see with the stick highly deflected to one side.)

Read more about in this section of John S. Denker's excellent "See How It Flies" website.

For the same wing area, roll damping will be greater with a large wingspan than with a small one. This is why airplanes with smaller wingspans generally achieve higher roll rates than aircraft with larger wingspans.

For the same external physical shape, a high moment of inertia in the roll axis (due for example to having the wings full of fuel or loaded with bombs) will cause the roll damping effect to take more time to bring the roll rate to zero (or near zero) after centering the stick.

To get actual formulae, you are probably going to have take a deep dive into some textbooks on flight dynamics or aircraft design.

Rolling also creates an adverse yaw torque, even with ailerons centered, which creates sideslip which interacts with any dihedral or sweep that is present to slow the roll rate. See this section of the "See How It Flies" website. But that's probably a finer-scale effect than you are looking to take into account. (The complex subject of the roll torque generated by the interaction between sideslip and the aircraft's 3-dimensional geometry has been touched on in several different questions on the ASE site.)

You'll find plenty of other content in the "See How It Flies" website that should help you with your project as well.

Not the answer you're looking for? Browse other questions tagged aerodynamics roll or ask your own question.

9
How can I calculate the rolling moment of an aileron for a given plane based on its performance?
0
What is the main source of yaw stability?
0
Looking for techniques to model resistance to roll rotation in a very simple, force-based flight model

1
How to define the aileron's deflection angle (in the Laplace domain)?
4
Why does increasing thrust on one engine make the plane roll and not yaw?
8
What is the axis of rotation in a high alpha roll?
7
What costs less energy? Roll or Yaw?
1
How much force is produced by control surfaces?
0
what are the Common roll angle and roll rate limits for civil flights?
0
What is the name of the Instrument that indicates roll?
0
Looking for techniques to model resistance to roll rotation in a very simple, force-based flight model