Is “balanced field” defined with or without an engine failure?

I’m wondering what exactly means a balanced field in terms of aircraft performance. From what I know it means that TODR=ASDR, also it is minimum field length required. But I do not know whether this TOD and ASD are with or without engine failure.

It refers to the case with an engine failure. 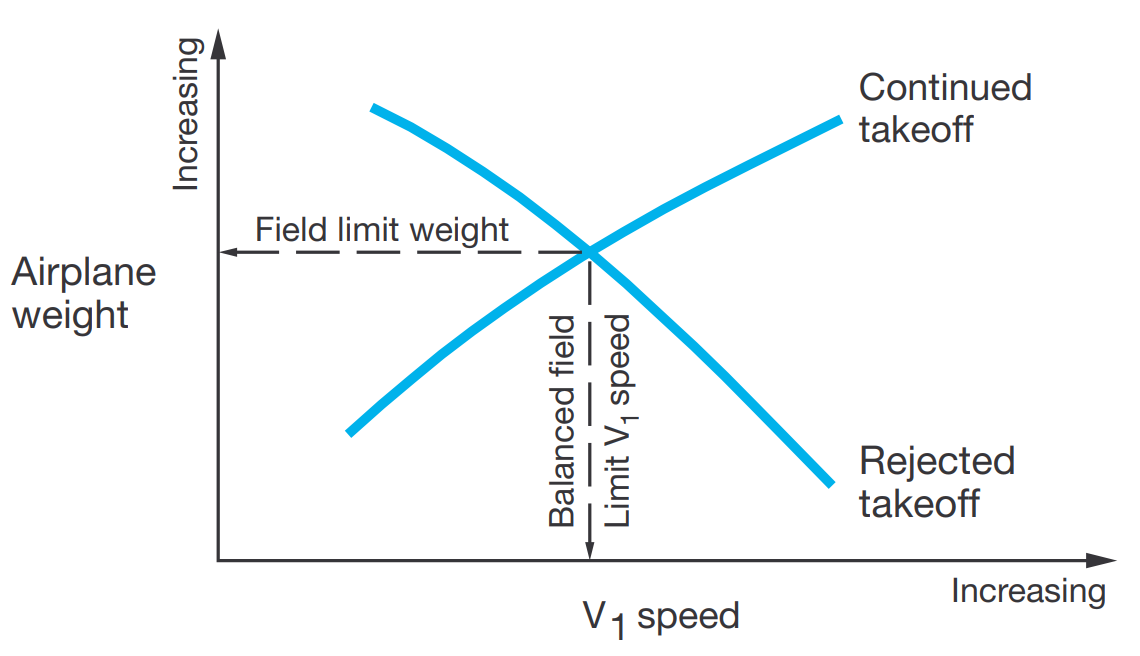 The Continued Takeoff—After an engine failure during the takeoff roll, the airplane must continue to accelerate on the remaining engine(s), lift off and reach V2 speed at 35 feet. The later in the takeoff roll that the engine fails, the heavier the airplane can be and still gain enough speed to meet this requirement. For the engine failure occurring approximately one second prior to V1, the relationship of the allowable engine-out go takeoff weight to V1 would be as shown by the “Continued Takeoff” line in Figure 10. The higher the V1, the heavier the takeoff weight allowed.

The Rejected Takeoff— On the stop side of the equation, the V1/weight trade has the opposite trend. The lower the V1, or the earlier in the takeoff roll the stop is initiated, the heavier the airplane can be, as indicated by the “Rejected Takeoff” line in Figure 10.

The continue case (accelerate-go) assumes an engine failure one second prior to V1.

Not the answer you're looking for? Browse other questions tagged aircraft-performance takeoff or ask your own question.

18
How are take-off segments defined?
8
How can planes with the same stall speed and power-to-weight ratio have such different takeoff field length, climb rate, glide ratio, etc?
3
Is there an ideal air temperature for best performance in a light aircraft?
2
What margin of error should one reasonably allow regarding aircraft performance?
5
Why would one want to slow to V2 following an engine failure during takeoff?
5
Why not separate out the two definitions of V-1 into two separate Vspeeds?
0
What is the average climb gradient of an aircraft during the takeoff and early phase of a departure procedure?
3
What is a Second Segment Weight Limit?
2
What is physics explanation for minimum sink rate airspeed?