Does it ever happen that increasing the prop RPM without moving the throttle actually decreases the thrust and power delivered to the airframe?

A) In an airplane with a piston engine and a constant-speed prop, flying at some given airspeed with the manifold pressure and RPMs in a typical cruise configuration, would it ever happen that increasing the prop RPM higher and higher without moving the throttle would at some point actually start to decrease the thrust and power delivered to the airframe?

Assume no electronic engine controls such as FADEC.

C) And the third part of this question is, for some given airplane cruising at some given airspeed with RPM and manifold pressure initially "square", what is an example of the highest initial manifold pressure at which we might find that advancing the RPMs higher and higher without changing the throttle setting might eventually cause a drop in the power delivered by the prop to the airframe? Or is this something that would only happen at very low power settings, such as would be used in a descent, and would never happen at any power setting capable of sustaining level flight at any airspeed? (This is basically a more refined version of part A.)

The intent of the question is that the advance in the RPMs is intentional and goes no further than the max allowable RPM of the engine and prop. Clearly a "runway" prop would be an extreme example of these dynamics but the question is intended to be constrained to the normal allowable operating envelope of the prop and engine.

Some related questions and answers on ASE--

You may get a speed increase but it's likely to be almost too small to detect (although this depends a lot on the plane and propeller combination).

When you increase prop RPM leaving MP constant, you are increasing the engine brake horsepower although there is a small drop in MP when you do that (and the opposite happens when you reduce RPM) that limits the total horsepower increase. 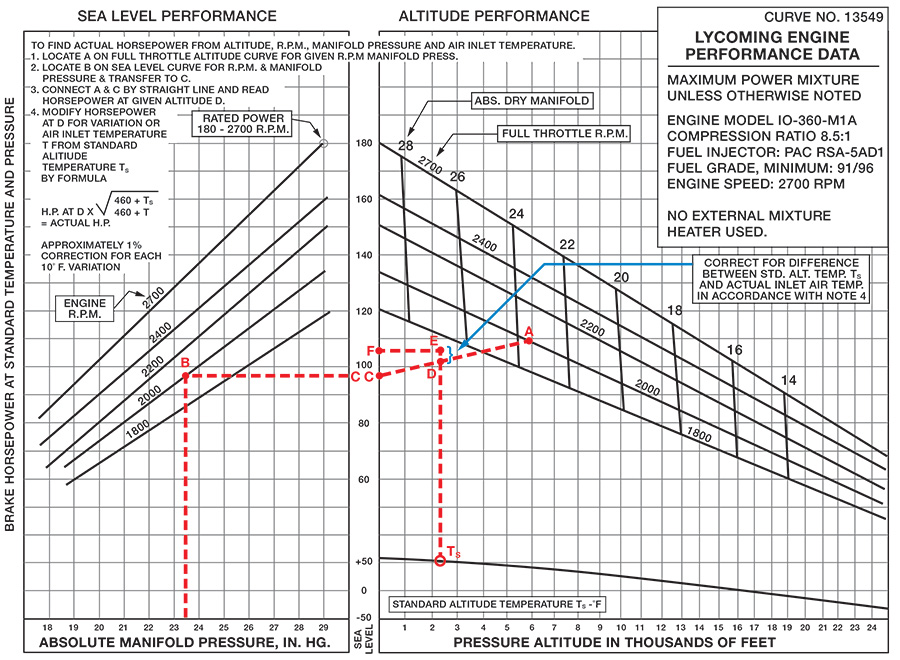 At the high RPM, you will also likely have the prop operating at a less efficient blade angle from low blade AOA - the governor doesn't know or care what the blade angle is, it just rotates them to load to blades to keep the RPM where it's set by the prop control (a spring pushing on a set of flyweights) so there will be another minor loss from the blades being at a sub-optimal AOA. Say, optimistically, 3%. So you end up with the equivalent of maybe 112-115 HP in net thrust compared to what you had before (this can vary a lot with different propellers).

So the result is, in a best case condition, you actually only increased the net thrust by a few percent and taking into account of the power-required-increases-at-the-square-of-the-speed aspect, there is a net airspeed increase of maybe a couple mph at best. If the prop efficiency really dropped off badly, you might find yourself going slower by a knot or two.

It also matters how you do it. If you were cruising along and raised the RPM suddenly by shoving the control forward, you will get a temporary deceleration as the governor unloads the blades to raise the RPM (it will also overshoot the redline giving that WEEEEEEEEOOWWWWWWWW sound you sometimes hear when pilots do that) and then the plane will slowly catch up.

If you just raise the RPM gradually, the proper way to do it, there should be little obvious acceleration or deceleration, but the speed may creep up or down a little bit and after things settle down you'll be a few knots faster, the same, or maybe a couple knots slower because the prop was operating at a very inefficient blade angle and the losses exceeded the minor Brake HP increase of the rise in RPM.

If you're at a very low manifold pressure setting, just off idle say, and the prop control is at Max RPM, the prop governor has a "command" (fly weight spring pressure) to let the engine run to redline and regulate RPM there, but the engine isn't making enough torque to spin the blades at redline. The governor will unload the blades trying to do that, until the blades reach the fine pitch limit.

Or, if you're at full throttle/Max RPM and pull the throttle way back, at some point the blades hit the fine pitch limits and the RPM starts to drop from redline. The prop has "come off the governor". Now the prop is effectively an overly fine fixed pitch prop. If you are at a certain fairly low MP, say 16", with the RPM at, say, 2200, and you move the prop lever up to Max RPM, the RPM may rise just a little as the blades were already near the fine pitch stops to keep 2200 RPM at 16". Add throttle, and the RPM rises like a fixed pitch until the RPM matches whatever RPM the prop lever is set to, and it "comes back on the governor" as the blades are moved off the fine pitch stops to keep the RPM at the selected setting.

As a general operating technique, you always lead with RPM on power increases, and lead with throttle on power decreases. And you get to know that each RPM change affects MP and learn to allow for it with each RPM change. For example, if you are climbing at 24 square and want to cruise at 22 square, you'll reduce the MP to about 21.5-ish, then reduce RPM to 2200, knowing that this will pick the MP up to 22"-ish, requiring a minimal subsequent throttle tweak to get it right on.

This may be a condition known as "runaway prop", the opposite of "feathering". As the pitch becomes finer, RPM goes up, but aircraft drag greatly increases, and thrust progressively decreases as pitch gets farther and farther away from optimum AOA.

This is a malfunction of the pitch control system.

Intentionally reducing pitch (for whatever reason) with the same power input would cause an increase in rpm. There is the separation of power (essentially rate of fuel burn) from prop load (essentially prop drag created at a given AOA and RPM, which determines thrust).

$Power$ is defined as $Force$ × distance/time. $Thrust$ × distance/time is defined by $Power$ × $Efficiency$. The decrease in $Thrust$ is a result of a loss in prop efficiency. A pilot may try firewalling the throttle to hold speed, resulting in more $Power$ from the pistons, but to no avail. The increased drag and decreased thrust would result in a loss of airspeed. The increased energy output would register at a rise in engine temperature.

Not the answer you're looking for? Browse other questions tagged piston-engine constant-speed-propeller flight-mechanics or ask your own question.