Why does only the right outboard aileron on the A320/340 float up when the aircraft is in the emergency electrical configuration? [duplicate]

Ask Question
Asked 1 year ago
Active 1 year ago
Viewed 346 times
1
$\begingroup$
This question already has an answer here:
Why does the A320 right aileron float on dual engine failure? (1 answer)
Closed last year.

EDIT: This answer is specific to the A340; the A320 is somewhat different.

In the emergency electrical configuration, neither of the two remaining flight-control computers can control the right outboard aileron, and it floats up under aerodynamic forces.

Some background: all Airbus aircraft from the A320 onwards have five flight-control computers, which translate the pilots' control inputs into control-surface movements.

These are divided into two categories:

Not every flight-control computer can control every control surface; the most critical controls (such as the elevators) are connected to four, or even all five, computers, while less critical surfaces only get two, and the least-critical (the individual spoileron panels) are connected to just one computer apiece (as there are six spoileron panels per wing, with each of the five computers controlling at least one panel on each wing, providing a great deal of redundancy).

The A340's RAT can only generate a limited amount of electrical power, especially since a considerable amount of its output has to go into maintaining pressure in at least one of the aircraft's hydraulic systems, in order to allow the aircraft to remain controllable; normally, the hydraulic systems are pressurised by engine-or-APU-driven pumps, but, if the aircraft runs out of fuel (one of the very few circumstances that can simultaneously render all engines and the APU inoperative, and the main reason why the RAT exists), only the RAT is left, and it has to provide both electrical and hydraulic power. As a result, a lot of electrical load-shedding has to take place to reduce the aircraft's electrical demand to something the RAT can handle; as part of this, three (for the A340) of the five flight-control computers are powered off, leaving only FCPC 1 and FCSC 1. Additionally, due to the limited hydraulic pressure available from the RAT, the A340's outboard ailerons are deactivated to reduce the demands on the aircraft's RAT-pressurised hydraulics.

The overall effects on the A340's four ailerons are:

As explained in @ymb1's answer to an earlier question of mine:

The manual does not give a direct reason (not unheard of), but in fact there's more than one reason. 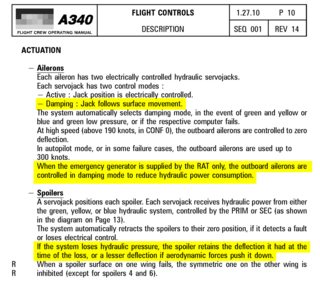 All images are from the A340 FCOM, and color highlights are mine. Do not use for flight.

Thanks to @JZYL, note that there are some differences between the A330 and A340, while the A340 would announce MOST SPOILERS being INOP, the A330 would announce HALF SPOILERS (an extra computer remains powered). The same rationale given should apply though.

(...) The AP will disengage when the failure occurs but AP 1 can be reengaged on the A333 if the EMER GEN is powered by an EDP. As there is no AP available in this configuration in the A340, the Captain must take control and fly the aircraft manually. The A340 aircraft is out of trim in roll due to right outboard aileron upfloat, caused by no power being available to Prim 3 or Sec 2, and neither pitch trim or rudder trim is available. (...)

Note: I haven't found a reason for the different architecture, but ETOPS is a possibility.

(All bolding, italicisation, etc., original to source. Kudos to @ymb1 for digging up all this information and explaining it to me.)

Not the answer you're looking for? Browse other questions tagged airbus-a320 airbus-a340 or ask your own question.

5
Why does the A320 right aileron float on dual engine failure?
8
Why shouldn’t the A330/40’s speedbrakes be used in alternate law?

4
How does auto-trim work on fly-by-wire aircraft?
4
A320: Why do SDACs supply all three DMCs?
5
Why does the A320 right aileron float on dual engine failure?
6
Why is the A330/A340's angle-of-attack protection disabled in alternate law, even if the AoA vanes are operating normally?
6
Why does the A320’s maximum allowable aileron deflection decrease, rather than increase, when the flaps are extended?
6
Why does the A320 use the rudder for lateral control in mechanical law?
3
Why is IGN SYSTEM A FAULT dispatch a NO GO on the A320 for ETOPS?
5
Why do the A320’s primary flight controls have hydromechanical backups only for the rudder?
0
Why does an ADIRU 1 failure disable all functions of the A330/340’s GPWS - even those not requiring ADIRU data?
5
Why doesn’t the A320 have any provision for manual aileron trim?