Can a company be both an airplane manufacturer and an airline?

It may be advantageous for a company that manufactures its own aircraft to also be an airline. For example, the airline business would likely have reduced maintenance and parts costs relative to other airlines, and there would be a tighter feedback loop between manufacturing and end consumers.

I have read that Boeing, who used to own United Aircraft and Transport (UAT), was forced to dissolve UAT after investigation into the scandalous "spoils conferences" (source):

In a move clearly aimed at Boeing, new Postmaster General James Farley and, later, Congress banned the award of the new contracts to any companies that also built aircraft.

I managed to find what I believe is the Air Mail Act of 1934 that supposedly bans these vertically integrated companies here, but I don't see where, specifically, the act bans these companies. It's unclear to me whether this was a one-off ban of combined aircraft manufacturers and air mail companies, or whether this ban continues through today with modern airlines. I am specifically interested in the US here, but would also be curious about other countries (e.g. could Airbus do this?)

Is it still illegal for all manufacturers to start their own airlines, or does this law no longer apply today?

Another historical perspective: Junkers helped to found and participated in dozens of airlines in the early 1920s. This helped to boost demand for his products (mainly the F-13, but all started with two converted military two-seaters).

That was everything but unusual: Many aircraft factories, among them Albatros and Sablatnig in Germany, tried to shift their products after the cessation of hostilities by founding airlines.

Generally, when a city wanted to be connected to the new air travel network, it would supply an airfield and some capital and the aircraft company would be happy to contribute aircraft and personnel. This way, dozens of airlines providing mostly local connections were operating in the early Twenties in Europe and competition would drive down prices and increase demand. Therefore, all those airlines were unprofitable and successfully lobbied for government support, which grew from year to year. But also Junkers was not profitable and had to be supported by government loans.

By 1925, 40% of all civil air traffic worldwide was flown on Junkers airplanes and Junkers Luftverkehr AG completely or partially owned many of the airlines operating its aircraft. The failure of Junkers to repay government loans at the end of 1925 meant that ownership of those shares was transferred to the German government which moved swiftly to consolidate the German airlines into Luft Hansa, thus ending the price war and greatly helping to reduce the subsidies.

By resolving to only subsidize one single airline, the national flag carrier, Governments effectively ended the habit of aircraft manufacturers to operate airlines. Specific legislation was not needed.

I did a little searching (I'm NOT a lawyer) and couldn't come up with anything that would explicitly prohibit a company from operating as both in the USA or the EU -- but I'm definitely not authoritative on that.

The definitions are a little fuzzy: airline can mean a few different things in a strict legal sense: there's a big difference between someone flying a few tourists around compared to British Airways or United carrying millions of people. If I can get a type certificate / approval and build an airplane, that makes me a manufacturer. If I then charge people for transportation, I can at least argue that makes me an airline, right?

With that said, like a lot of aviation (particularly airline) questions, I think you'll find that the answer is more tightly coupled to economics than it is law or physics...

Running an "airline" in the conventional sense of the term is an incredibly expensive, high-risk, high-capital, complex operation. Billions of dollars in investment has been poured into that industry over decades, and a large percentage of it has been lost. To be competitive in this space requires extremely specific business skills that are hard to find in general, and even harder to retain.

Running an aircraft manufacturing operation is also very complex, highly-regulated (in lots of different ways) and also requires a set of business, technology, and people resources that are ALSO really really hard to find and keep. There probably aren't more than a dozen "large" aircraft manufacturing operations in the world today, only a handful are in the business of "building airplanes for airlines" in the traditional definitions, and the costs are a huge part of why that's the case. (See also: the exceptional consolidation of both airlines and manufacturers in the last few decades)

For your examples, for Boeing to try and operate as an airline would come with some economies of scale (they'd be buying their own airplanes, right?) but would also come with massive additional costs and complexities -- one of the largest being the business problem that they'd be "competing with their own customer base": this is never a fun place for a for-profit enterprise to land.

I was able to come up with only two scenarios where this might happen:

I think it depends on the country, but mostly, yes, an airplane manufacturer can operate as an airline at the same time. Take one example, Antonov. Antonov builds planes like the AN-225, and also flies the AN-225 in cargo operations.

I don't know about US regulations about this, but Boeing does operate it's own aircraft in airshows.

And as for all airplane manufacturers, I don't know about that, because every country might have their own rules, even if they are all a part of the ICAO or IATA. So, Im sure that you'll find some authoritarian country out there that won't allow it. 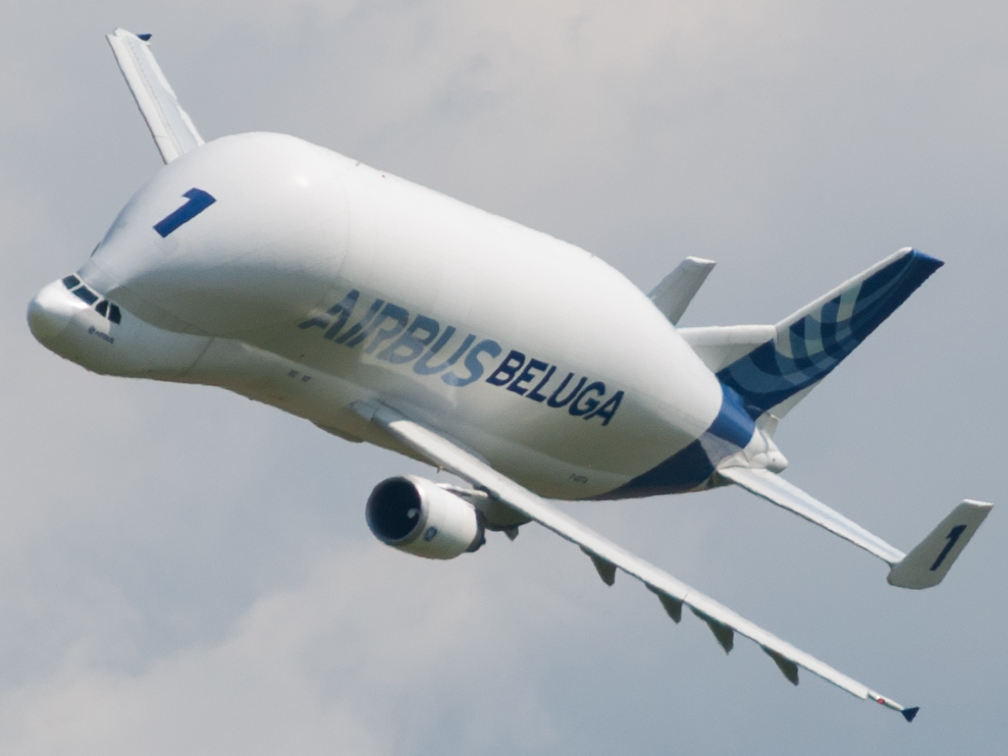 The Airbus Beluga (Airbus A300-600ST) is a modified version of the standard Airbus A300-600 designed to transport oversized cargo.

The plane was designed by Aérospatiale and DASA, two of the major Airbus partners. The Beluga is operated by Airbus Transport International (ATI), a wholly owned subsidiary of Airbus Group that was established specifically to operate the type of aircraft. The Beluga is a transport method for individual parts of Airbus planes for final assembly in Toulouse, France. In addition, it has been used to transport third party cargo such as satellites to launch facilities, relief supplies and even oversized artwork.

Boeing uses a similar aircraft, the Boeing 747 Dreamlifter. The Dreamlifter was designed by a third party and operated by a third party. The design was handled by Evergreen Aviation due to FAA regulations (I do not have a citation). The air fleet is operated by Atlas Air. I could not find any regulations that stop Boeing from operating it's own fleet of aircraft. It's more of a consideration to how Boeing operates these days.

Not the answer you're looking for? Browse other questions tagged airline-operations aviation-history boeing regulations or ask your own question.

9
Can airline pilots communicate with dispatchers?
9
How much would it cost for a large airline to switch engine manufacturer for their planes?
12
Is defacing the airline logo of a wrecked airplane illegal?
20
Is there any airline company owner who also works as a pilot?
21
How do airline pilots contact their company while in the air?
3
Can airline ignore or get exception from V1 and other safety rules?
4
When does the airline check if an airplane can reach its destination?
3
If an airline cancels an aircraft order, can a different airline acquire those options?
7
Can Private Pilot training, funded by employer, count as company hours?