Why does an ADIRU 1 failure disable all functions of the A330/340’s GPWS - even those not requiring ADIRU data?

Among the many (many many) aircraft systems degraded or rendered unavailable to the flightcrew of QF72 as a result of a partial intermittent ADIRU 1 (Air Data / Inertial Reference Unit 1) failure, the aircraft’s GPWS was rendered totally inoperative (all emphasis mine):

In addition to the potential for a pitch-down command, other known effects associated with the data-spike failure mode on the A330/A340 included:

It makes sense that those GPWS functions requiring ADIRU input would be rendered inoperative by a loss of ADR/IR data;1 for instance, excessive-descent-rate protection and terrain-ahead avoidance both require pressure altitude (to calculate the aircraft’s descent rate, in the former’s case, and to determine whether the aircraft has enough altitude to safely clear rising terrain ahead, for the latter), an ADR parameter, while bank-angle protection requires roll attitude, an IR parameter.

However, not all GPWS functions require ADR or IR input; for instance, of the GPWS’s original functions, most (dangerously low height above terrain when not configured for landing; excessive terrain-closure rate; loss of height after takeoff) require only radioaltimeter data2 (plus, for the first, aircraft-configuration data), which is unaffected by even a complete loss of all air and inertial data.

So why does a loss of air-data and inertial inputs disable even the functions of the A330/340’s GPWS not requiring said inputs?

1: Although this raises the obvious question as to why such a safety-critical system as the GPWS was connected to only a single ADIRU, with no ability to switch its inputs to a different source should ADIRU 1 fail.

That's wrong. The basic GPWS needs barometric data alongside the RA.$^{[1][2]}$ (Not talking enhanced functions of EGPWS here, rather the most basic modes 1–3, and mode 4 needs airspeed/Mach with RA.)

The A340's GPWS computer (EGPWC) takes this barometric info (vertical speed) from ADIRS 1 (schematic), if that's failed, so would the basic GPWS.

Note: Computing the height time derivative ($\dot h$) is not as easy as using V/S, you need high sampling rate and a perfect radar lock that won't be fooled by say trees or uneven ground reflecting the signal away. In France, some airports use radar reflectors on masts to fool the RA into thinking the ground is flat: 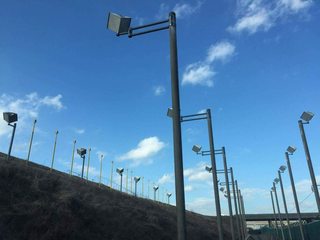 Not the answer you're looking for? Browse other questions tagged sensors airbus-a330 aircraft-failure airbus-a340 gpws or ask your own question.

12
Why does the wing root of the A330 have a pronounced twist?
4
Why does Airbus continue with the A330-800neo despite only having 6 orders?
6
Why is the A330/A340's angle-of-attack protection disabled in alternate law, even if the AoA vanes are operating normally?
8
Why does the A330 sit nose-down on the ground?
8
Why aren't angle-of-attack data sanity-checked before being fed to other aircraft systems?