Why isn't there more green space on the apron? [closed]

I feel like it's a waste of concrete or asphalt. Can't they just leave some areas that don't get taxied on as grass? If taxiways are designed with green spaces in between them, why can't we see much grass on the apron? 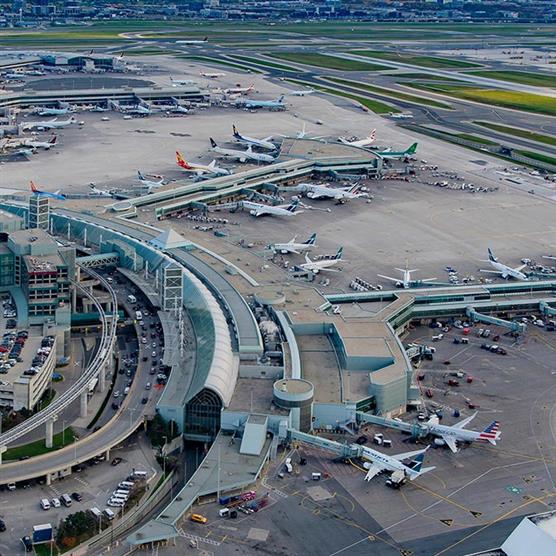 The same reason that highways have grassy medians and shoulders whereas parking lots are generally a solid expanse of pavement. One is optimized for moving vehicles in an orderly and efficient fashion from one place to another and the other is optimized for packing stationary vehicles as densely as possible around that destination.

I honestly see no spots where grass wouldn't be in the way or limit the usage of the gate in the photo in the question. Different aircraft types require different amounts of space around the gate, patches of grass could limit what aicraft types a gate could service.

Even if you design the gate to be able to handle all current aircraft, a new model could be designed in a year or five that would revolutionize the air industry with a new design which wouldn't be compatible with your patches of grass. Sure, you could redesign the apron, but why bother when you can avoid the issue in the first place?

Most airports store various bits of equipment around the gates; having patches of grass would make the apron less flexible, and more costly to maintain. If nothing else you'd need to employ someone to cut the grass and give them some gear to do it with; depending on where the grass is located you might not be able to use the same (huge) cutters used other places in the airport. Depending on the size of the patches of grass it might also impact gate availability which is something you don't want.

Grass, gravel, and dirt dirt between movement areas like runways and taxiways makes sense because the movement of vehicles and persons in those areas is so highly controlled and restricted. Aircraft have to remain within certain boundaries. The same can not be said in non-movement areas such as ramps and aprons. Coordinated and choreographed are better terms to describe movement in non-movement areas. Aircraft and vehicles can and really must be able to move in any direction necessary on the ramp. Most aircraft can not move in reverse without external assistance. And, the ramp is much too dynamic of an environment to overly restrict movement.

Grass, dirt, gravel and other soft surfaces would only work for movement areas for very small aircraft. It can not easily bear the weight of large aircraft. It would be very weather dependent for even small aircraft. Any lingering water from rain may make it impossible to move an aircraft with normal tricycle landing gear without bogging down the wheels. Whether you can park an aircraft on such porous surfaces would be dependent on local ecology rules and laws. Some areas make it illegal to park any motor vehicle on grass.

Concrete is a very chemically resilient substance. Oil and fuel spilled on concrete will not erode and/or dissolve it as quickly as it would a petroleum based substance like asphalt. That is why gas/petrol stations all have concrete parking lots. In some countries, any area where vehicle fueling takes place are mandated to have concrete pads. Vehicles sitting for periods of time will leak fuel and oil. Parked aircraft fuel tanks are usually full of fuel to prevent condensation and water accumulation. They are vented to account for expansion. They will leak.

Concrete is very strong, yet very brittle in comparison with other materials. Breaks and cracks can form due to seasonal heating and cooling. That is why concrete slabs are built with expansion gaps/joints. Extreme temperatures can cause even more damage. Water trapped in the porous concrete or in between crack can expand when frozen and break the concrete. Shifts in the underlying earth due to the moisture level of the soil varying throughout the year can severely damage concrete slabs.

Asphalt’s chemical resistance is not so great. Asphalt is a petroleum product. Petrochemicals like fuel act as a solvent. Like chemicals dissolve like substances. For instance, you can dissolve an asphalt speed bump on a street with a few gallons of diesel over time. Airplanes spend a smaller amount of time on asphalt runways than they do on concrete aprons.

4
Does the size of code F aircraft parking apron enough for 2 code C plane?
12
Why do some airports have more than 2 runways, when LHR can get by with 2?
4
What are the dimensions of the parking apron?
4
Why is there such a long displaced threshold on 22R at JFK/KJFK?
2
Where to find the parking coordinates of the aircraft in the Apron?
4
Does the angled parking scheme of London City (LCY) increase the number of aircraft that can be parked in the small apron?
2
Do the spaces between runways and taxiways need to be grass/scrubs?