Why the gradient of $C_L$-$\alpha$ graph increases with the Mach number?

From the JAA ATPL Book 13 (Principles of flight) the gradient $\frac{dC_L}{d\alpha}$ of the $C_L$-$\alpha$ graph increases for higher Mach numbers. Can someone explain why this is the case? 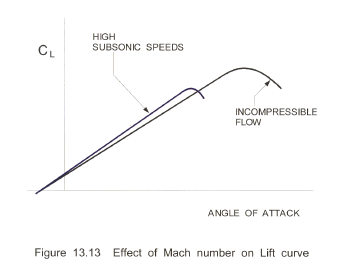 This increase in lift curve slope with Mach is commonly predicted via the Prandtl-Glauert correction for 2D airfoil:

The physical reason is the magnification of pressure change due to density change (compressibility), as understood from the isentropic relation:

where $\rho$ is density and $p$ is pressure (Ref. Drela, Flight Vehicle Aerodynamics).

5
How is the climb gradient calculated?
11
What is the relation between an airplane's altitude and the drag it is experiencing?
5
How to determine if flow transitions or separates from a Cp plot?
5
Why the dynamic pressure is not mentioned in the explanation of lift by Bernoulli's principle?
1
How does wing aspect ratio influence lift and drag?
3
Does propwash increase pitch stability?
2
Why does the effective alpha/CL increase at wingtip of swept wing?
2
Why does pitching moment coefficient decrease with an increase in the angle of attack?
3
Is it possible that as the Reynolds number increases, a laminar bubble increases in extension?