Do pilots ever intentionally land a monowheel glider on the main wheel and a wingtip wheel in crosswind conditions?

Do pilots ever intentionally strike a wingtip when landing a mono wheel glider in gusty crosswind conditions?

I understand the Lazair changed from a mono wheel to a standard tail dragger layout for better cross wind ground handling. What about gliders?

Is doing a two-point high-speed ground roll/landing ever done intentionally, with the mono wheel and wing tip wheels (intentional wing strike), instead of slowing down then dropping the wing just before coming to a stop? Say 10 mph crosswind, gusting to 15mph/max crosswind component.

The lever arm of that glider wing is too long and the ground contact force too hard to control. You risk a tailspin which at touchdown speed might very well include a fractured tailboom.

Glider pilots fly their crosswind approach crabbed and try to keep the wings level. After the flare the ideal landing would include a brief kick on the leeward rudder pedal to align the fuselage with the direction of movement just as the wheel touches the ground, but even a slight sideways movement at the point of contact is no problem. Wing tip contact is avoided at all cost and delayed until the glider has slowed down so the ailerons cannot keep the wings level anymore.

The only exception is when there is no safe landing feasible – say on a rocky slope in the mountains. Then the advice is to sideslip the glider into the ground, hoping that the crashing wing will absorb enough energy to let the pilot survive. But that is a single-point landing and quite different to what you have in mind.

But there is one aircraft that can take off from a two-point (actually, counting the tailwheel, it's three, but two of them are the single main wheel and a wingtip) and that is the Akaflieg München Mü-23 motorglider (picture below, source). Starting from a position 90° to the intended take-off direction and with the wingtip pointing into that direction down on the ground, the pilot opens the throttle and lets the aircraft swing around. By the time the aircraft has completed the 90° course change, the wing is level from the centrifugal force and the speed is high enough to keep it there with the ailerons. 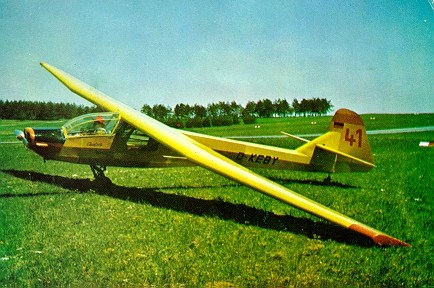 Touching the main wheel and wing tip would not be very nice and risk a ground loop. Gliders often have a higher crosswind rating that powered aircraft, I have seen tow planes reach their limits before the glider does a number of times. I have once on a ground roll due to a failed wheel brake put a wing tip on the ground to steer the glider (at a low speed) as the crosswind was causing the glider to weathercock while still rolling.

Not the answer you're looking for? Browse other questions tagged aerodynamics glider pilot-technique or ask your own question.

5
Can a light glider without thermal protection land from the orbit, starting from the orbital speed?
10
What is the difference between a glider and a sailplane?
5
Do pilots land a helicopter sideways for improved visibility of the landing area?
4
Can I apply for ASEL and Glider class ratings at the same time?
14
What are the pros and cons of wingtip tanks?
2
Do motor glider pilots ever "cheat" and use their motors to thermal?
0
Is it fairly common for student glider pilots to have wing tip strikes, especially in gusty cross wind conditions?
2
Does the FAA or FCC recommend 123.5 as the preferred frequency for air-to-air and air-to-ground use by glider pilots or balloon pilots?