How are pilots prepared for a go around on a simultaneous converging approach when the "converging chart" is not published? 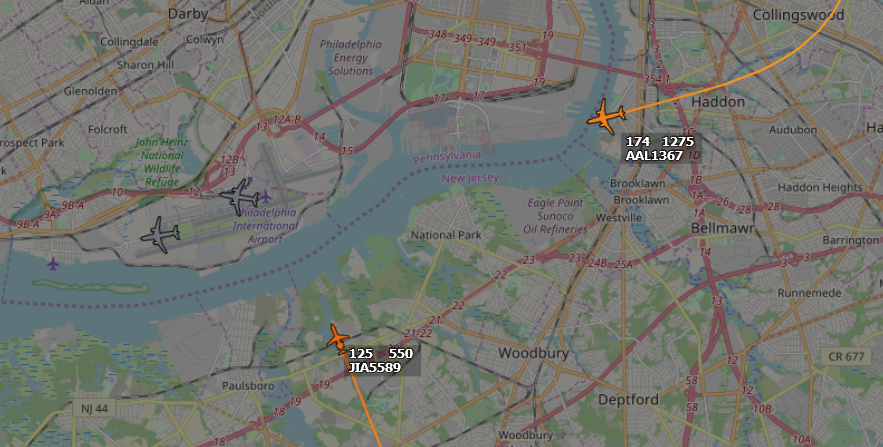 Today I learned that at KPHL (Philadelphia) simultaneous converging approaches are used. (Note that AAL is faster, which narrowed down the time gap by the time it landed.)

Those planes are approaching to runways 35 and 27R.

But, those two runways do not have "converging" approach plates (red paths below). The published ones are for 09R and 17 – ILS V RWY 09R (CONVERGING) and ILS V RWY 17 (CONVERGING) – with missed approach paths that diverge like so (blue paths): 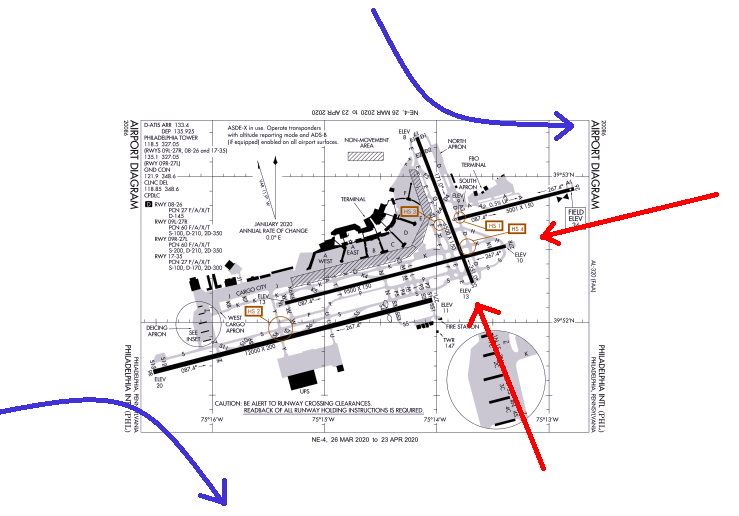 The requirements for conducting SCIA operations to converging runways are:

SIAP specifically titled "Converging" and is published in parenthesis after the title of the procedure, for example, ILS V Rwy 17 (Converging).

With those charts not available, how would the pilots anticipate and plan where to go? Are they available but not public, or are the pilots notified by radio on what to expect? How does it work?

The reason you don't see similar charts for the north+west operation (i.e. 35 + 27's) as for those that you pointed out for the south+east (i.e. 17 + 09's) operation has to do with the way the runways are set up, and what ATC has to do to clear aircraft for the approaches in the first place.

In the case of the south+east approaches -- i.e. landing to the south on 17 + to the east on 09R -- the runways shown never intersect, so aircraft can be cleared for the respective ILS approaches without regard for the timing involved.... most of the time, they'll each land, roll out normally, and exit the runway, and they never get anywhere near each other -- even if one or both roll out to the end of their respective runways.

In the case that the weather suddenly goes down & they have to go missed, that's when a deconfliction has to happen, and it's handled by creating the missed approach paths to turn as you showed so that separation is maintained.

So far, so good, and you got all of that already, I suspect.

What differs in the case of the north+west operation that you asked about & illustrated in red is that the paths of the two aircraft absolutely will cross, every single time, and probably at very similar altitudes when landing on 35 + 27L/R. So ATC has to do a lot more when they clear aircraft for these approaches: they compute (with computer assistance) a separation IN TIME at the point when they will each reach the crossing of the runways. (And, if the speeds change enough that the separation looks like it won't be maintained, they have to send one or the other around... not common; the controllers there can build in plenty of buffer to avoid that scenario.)

Thus, it doesn't matter if the weather goes down & the aircraft have to go missed... they will still reach that crossing point separated in time. So they can both go missed straight out.

And, to consider the follow-on question, "what about a north+east or south+west scenario"... the south+west scenario (17 + 27's) would probably require separation in time just like the north + west scenario would -- the runways cross (and 17 is probably too short to publish LAHSO), so the timing has to keep the planes apart on roll-out. Which would also keep them apart in the event of go-arounds. And the north+east option probably isn't used, because if the long runways (i.e. 09L/R) are departing east, aircraft landing to the north (on 35) shut down departures from both the 9's, in a way that doesn't happen when departing to the west. (West departures don't cross the 35/17 centerline the way that east departures do.) So in lieu of publishing charts to cover that scenario, ATC simply doesn't use simultaneous converging approaches in that configuration.

As Runway 35 and Runway 27R intersect they are not SCIA. Additionally Runway 09R and 17 do not intersect and the extension of the Runway 17 centerline would cross 09R centre line prior to it passing 1NM.

Not the answer you're looking for? Browse other questions tagged air-traffic-control faa iaps missed-approach or ask your own question.

8
Why are only two of the five water-facing runway ends at KBOS equipped with EMAS beds?

13
When cleared for an approach and not on vectors, is a depicted course reversal always required?
12
How do you properly enter the NDB34 published approach at Friday Harbor (KFHR)?
5
Approach plate does not require DME, but DME used in the published missed?
4
What is the missed approach procedure when initiated below MDA/DA/DH?
4
What does the letter J mean at the start of an FAA instrument approach chart identifier?
3
What should a pilot do upon reaching a Missed Approach Fix when holding instructions are not given?
2
When not cleared straight in for a VOR approach, how is this type of procedure executed?
6
What RNP level is required for an RNP approach if the chart does not specify a value?
5
How do I fly direct to the VOR on a VOR missed approach?
7
Does the pilot have to fly the entire published missed approach procedure if the circling approach is abandoned just prior to touchdown?