Why does the DC-9's antiskid system have to be manually disarmed during landing rollout following a ground-shift-mechanism malfunction on takeoff?

An aircraft's ground-shift mechanism (usually a sensor wired to the nosegear strut that looks to see whether the strut is compressed or not) tells the aircraft whether it's on the ground or in the air. This determines how the aircraft responds to certain situations; for instance:

The ground-shift mechanism can occasionally malfunction, in which case fun things can happen, like the engines refusing to reverse upon landing and the stickshakers going off during taxi (if it fails in the "air" position) or the takeoff-warning horn going off when you raise the flaps during climbout, the landing gear staying locked down, and the aircraft refusing to pressurise (if it fails in the "ground" position); the usual workaround is to force the aircraft into one or the other mode using circuit-breaker fu.

One specific type of aircraft (the DC-9) has the following interesting entry in the abnormal-procedures section of the AOM, regarding what to do during landing if the ground-shift mechanism failed upon takeoff:

If landing gear was not retracted prior to landing, ground spoilers must be operated manually.

Why does a ground-shift-mechanism failure require the DC-9's antiskid system to be manually deactivated during rollout?

Historical yet pertinent note: Concorde was the first plane to have electronic anti-skid, which means the DC-9 (also electronic) had the system installed after entry into service.

The relevant patent for this answer is: Anti-skid control system for aircraft.

The nose gear ground shift is part of the anti-skid system (see below; click to view). 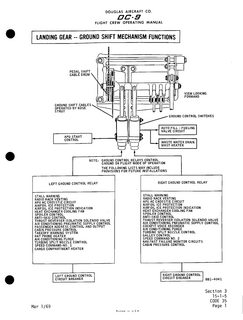 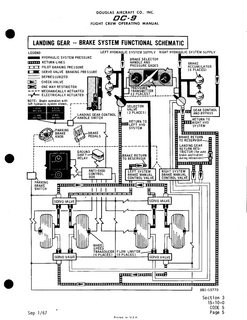 Here's how the circuitry works:

In the case here – with the plane still in flight mode due to the pulling of circuit breakers after the malfunction – any time the plane is stopped (or circuitry is de-energized), the circuitry would release the brakes (thinking there's a lock).

Note: The newer MD-80 has the same procedure minus the manual disarming of the anti-skid, which hints at newer circuitry.

Not the answer you're looking for? Browse other questions tagged landing braking aircraft-failure dc-9-family or ask your own question.

7
How does the squat switch work?

30
How do Ram Air Turbines get deployed?
16
Why did the Concorde require a droop nose and how did it work?
11
Why does a steeper approach cause an increased landing rollout?
3
Do any aircraft have a "self-contained ILS"?
3
How does pulling back provide better steering during rollout for light GA planes?
8
Why aren't angle-of-attack data sanity-checked before being fed to other aircraft systems?
0
Why does an ADIRU 1 failure disable all functions of the A330/340’s GPWS - even those not requiring ADIRU data?
3
How is the debris deflector on the DC-9-80 ("MD-80")'s nose gear kept from striking the ground during landing?
8
Is there a deterministic guide to landing?