In simple mechanical stick linkages, is there crosstalk between the aileron and the elevator movement?

I'm an aviation enthusiast (who has played a lot of sim in his life and will play lots more :D) but I've never actually flown any plane myself, as in, actually used the controls (but I'm planning to make my PPL one day, I've always wanted to have wings :).
I also have an idea in my mind which involves a simply constructed stick control column.

While looking at some pictures of the mechanical construction of the linkages that translate stick movement to aileron/elevator movement, I've stumbled upon this design analysis of the Mitsubishi A6M3 Zero, a japanese WWII fighter plane.

Looking at this drawing of the linkages on the stick, 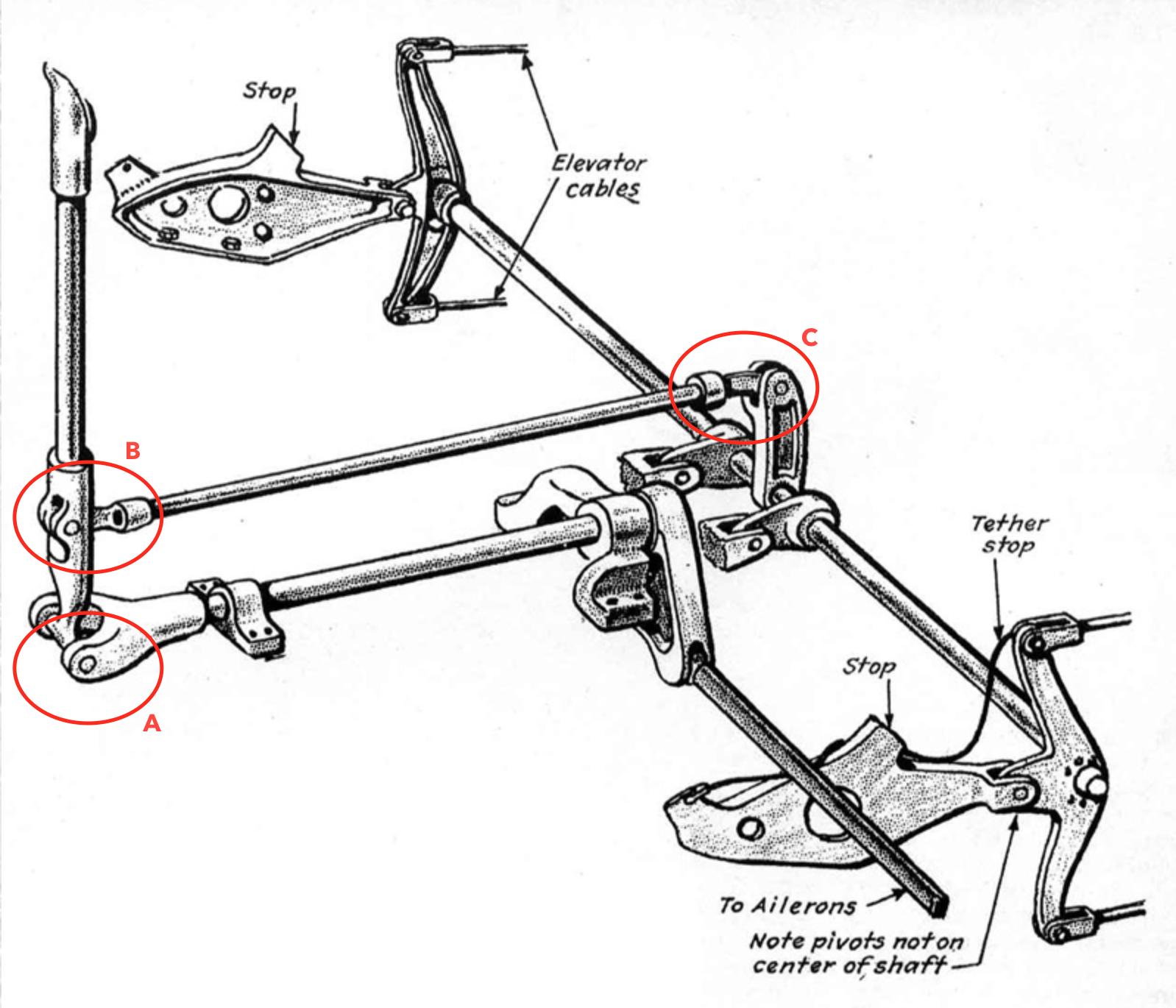 If the stick is rotated exactly and only around the aileron axis (thus describing a pure 2D movement along the surface of a circle, basically, the stick does not rotate around the "bolt" (A) with which it is mounted to the bell crank), it looks to me as if this would inevitably lead to a change in angle on the elevator, since the distance between the point where the push pull rod is linked to the stick (B) and the point where it is linked to the "elevator hinge" (C) and the push pull rod would pull stronger on the elevator (leading to a higher AOA) the further the stick is rotated around the aileron axis.

Does this mean that in aircraft with similar stick mechanisms, the further you rotate the stick to the left or right, the more you would have to push it forward/the less you would have to pull it back in order to not change the pitch of your elevator?[1]

If this is the case, is it a problem or does one intuitively get used to compensating for this "crosstalk"?

[1]: I'm not talking about lowering your AOA the more you bank to avoid stalling. Just imagine you're in a steep bank and push the stick to the side quite far to level your wings. Would you have to push forward so you don't increase your AOA while levelling out?

As drawn, that linkage would cause elevator movement if you moved the stick in a perfectly lateral direction. But when you roll into a turn, you normally apply a little up elevator anyway, and in any case the tendency is to make allowance for that kind of displacement with subtle stick movements without really realizing it.

In light aircraft it's more common to see the arrangement below, with concentric tubes; a large torque tube to run the ailerons, and a centre push/pull tube for the elevator, eliminating any geometric cross-talk because they are both running on the same axis. An alternative arrangement is to make the big outer tube for the elevator and run it laterally, with the internal push/pull rods running to the ailerons. You see this on side by side a/c and the below pictured configuration on single seat or tandem a/c.

Airplanes with very tight space confines like gliders can't always use that tube-in-a-tube arrangement and will sometimes have separated aileron and elevator linkage tubes a little bit like your illustration, but condensed into a small space, that result in very small amounts of geometric cross talk, but it's not enough to notice when flying. 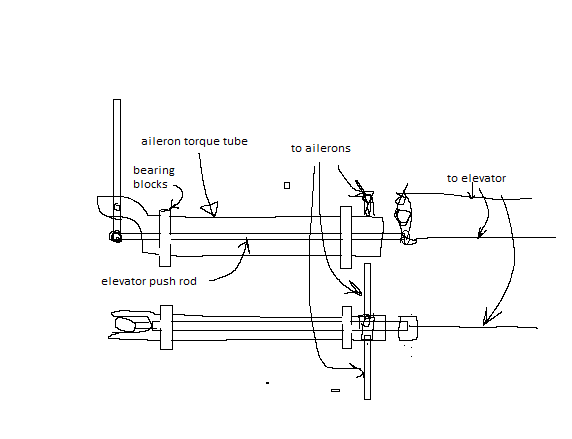 In simple mechanical stick linkages, is there crosstalk between the aileron and the elevator movement?

In almost all cases, there is no intentional-- or discernable-- mechanical coupling between aileron deflection and elevator deflection. However in the Schleicher Ka-6 sailplane, the mechanical linkage is designed to raise both ailerons a little bit, effectively increasing washout in the wing, when the stick is far aft. See for example page 3 in this manual. Some other aircraft may share this unusual feature. You can imagine why it is desirable to have more washout in a low-airspeed thermal turn than in high-airspeed cruising flight.

I think what you're missing is 'control feel' - the pilot can feel the load on the control surfaces, which is significantly larger than friction in the joints of the mechanism. You fly by the stick forces not the absolute position.

If that mechanism wasn't connected to the control surfaces, and hinge A was slightly sticky, moving the control column to the side would cause some down elevator. However in actual use, a pilot would feel the elevator input and compensate, probably without even noticing.

In fact, due to the way our arms bend from the shoulder, we would probably move the stick in an arc when we intended to move it purely sideways.

Also the designer most likely considered the cross-talk and ensured it wasn't a problem within the limits of stick travel.

24
Do Airbus pilots have to practice flying in alternate law?
7
Is this explanation of adverse yaw correct?
4
What are the differences between direct law and mechanical back-up?
2
What are the mechanical deflection angles for Airbus side-stick controllers?
5
What exactly happens when power is reduced in trimmed, straight and level flight?
9
Are 737 pilots required to train in manual-reversion flight?
3
Why are the A300/310’s electric pitch trim switches inhibited with the autopilot engaged?
15
How controllable is the 737 in single-engine manual-reversion flight? Is it controllably landable (or go-around-able) in this condition?