What is the upper deck on converted freighter long-hump 747s used for?

All 747s1 have an upper deck directly behind the elevated cockpit, a legacy of the 747’s genesis as a design for a strategic-airlifter competition (the upper deck and elevated cockpit were partly to allow the use of a swing-up nose for easier cargo loading without having to disconnect and reconnect all the wiring and control cables and whatnot every time the nose was opened, and partly to keep the main-deck cargo from crushing the flightcrew in the event of an accident);2 this gives the 747 its distinctive hump and unmistakeable silhouette. There are two 747-upper-deck major versions:

As even relatively-new 747s become increasingly uneconomical to operate as passenger aircraft in a world of rising fuel prices and big, efficient, ETOPS-300+-certified twinjets, many long-hump 747s are being converted for freighter service; the conversion process for these aircraft (known as Boeing Converted Freighter, or BCF, 747s) involves stripping out the main-deck seating (and ancillaries like lavatories, galleys, overhead bins, etc.) for cargo rails and tiedowns and cutting main-deck cargo doors into the fuselage. It does not, however, involve cutting the upper fuselage down to a short-hump configuration (which would be a far more involved piece of surgery than the other BCF modifications), and, as such, leaves the BCF aircraft with an upper deck that is all wrong for its new role; it can’t be used for large, containerised cargo á la the main-deck and lower-lobe5 compartments (the upper-deck fuselage profile doesn’t leave enough space, and there’s no upper-deck cargo door), and, yet, it’s far too large for carrying any reasonable amount of supernumeraries, cargo-handlers, or would-be jumpseaters.

What do operators of long-hump 747-BCFs do with the upper deck? Do they leave the seats in, on the off chance that they have to transport something that requires a LOT of handlers/escorts/whatnot? Use it for small bulk cargo (mail, parcels, checked baggage that didn’t make its owners’ flights, etc.)? Tear out everything but the front few seats and just haul it around empty?

1: ...well, except for these ones, but those are a very special case.

2: The proto-747 lost out to the Lockheed C-5, which has a full-length upper deck used for personnel transportation.

3: The -300 had no dedicated freighter version, although many passenger -300s were eventually converted to carry freight.

5: The space (divided by the wing centre box into separate forward and aft compartments) below the main-deck floor, which, in the aircraft’s previous passenger-carrying life, was known simply as the “cargo hold”.

They have seats for couriers, same as factory freighters, but roomier.

Note: From the -400BCF type certificate:

There are no provisions for the carriage of passengers. A maximum of 19 couriers can occupy the aft cabin of the upper deck as defined in AFM. 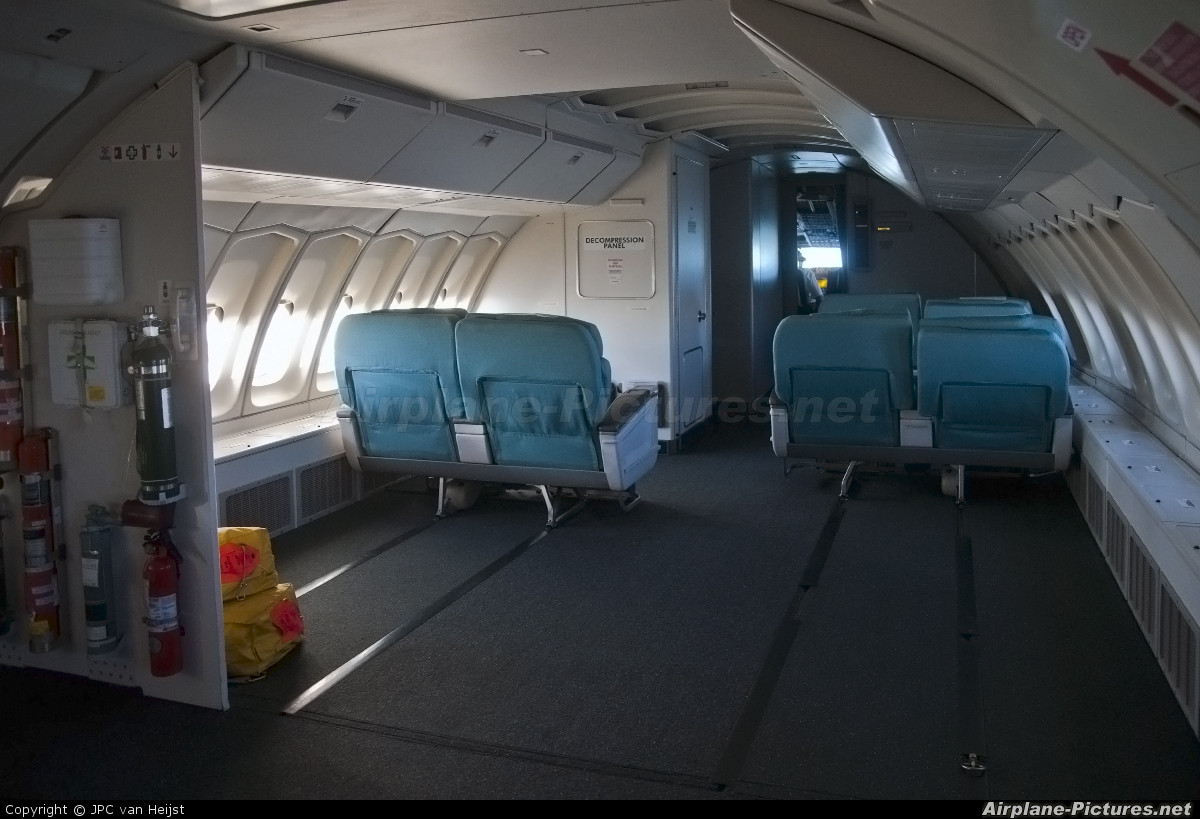 Above is the upper deck of a -400BCF (converted freighter).

And below on the left is an -8F. Also, note the foldable yellow ladder for access to/from the main deck.

Not the answer you're looking for? Browse other questions tagged boeing-747 cargo modifications or ask your own question.

11
How many active large commercial airplanes are there?
10
Is the A330F main deck cargo compartment pressurized? If not, what is the purpose of the structural cargo access door?
7
How was the 'bump' removed from the Airbus P2F?
9
Why do cargo aircraft still have floors?
10
Is it possible to convert a passenger A380 to carry cargo?
7
Why is the Beluga chartered out for oddball missions, but not the Dreamlifter?
4
How much does a passenger-to-freighter conversion cost?
12
What's the maximum seat configuration for a 747 that is actually used?
17
Why did early 747s have only two or three windows on the upper deck on each side?